Sony Pictures Home Entertainment has gathered together the Men in Black Trilogy once again for this 20th Anniversary 4K Ultra HD collection. This action comedy franchise based on the comic book series got its start in 1997 with the original film. Starring Will Smith and Tommy Lee Jones as the titular secret government agents J (Smith) and K (Jones) policing clandestine aliens residing on Earth, the silly fun of the series played on the then big government conspiracy thrillers like The X-Files and Roswell with a more comedic bent and went on to become a bona fide blockbuster. A sequel would follow in 2002 that brought in Lara Flynn Boyle as an alien seductress looking to destroy the planet and possibly the universe, but with K’s memories gone, J must somehow get him to remember so he can help reunite MIB before the world is destroyed. Men in Black 3 wouldn’t come along for another 10 years and the two leads were obviously much older, Jones in particular. The problem was solved by bringing in Josh Brolin to play a much younger Agent K and designing a plot based around time travel that sends Agent K back to 1969 and the Apollo 11 launch in order to stop a murderous alien from killing K in the past and then conquering the Earth in the future. While this plot is a little confused, as all stories involving time travel often are, director Barry Sonnenfeld somehow manages to hold it all together for a reasonably entertaining if hardly as good as the original effort. 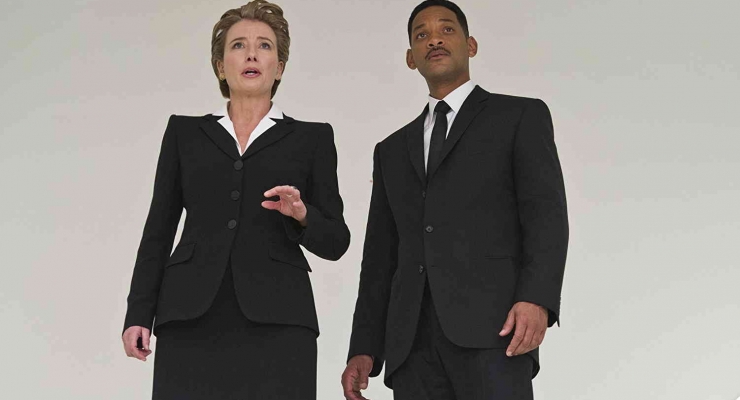 The first two Men in Black films were shot in 35mm with numerous Panavision cameras. MIB 3 was shot digitally on Arri cameras and utilized a 4K digital intermediate in post processing as well. The all arrive in strong HEVC 2160p (4K) encodements with HDR10 high dynamic range on 4K Ultra HD. There’s an undoubted incremental increase in quality from MIB I to MIB III, with III looking the best of the lot and I the weakest, but only in that the first film has a few patches where there are some grainier and softer looking scenes. The highlights and vivid colors in all three look amazing and MIB 3 with its full 4K production from shooting through post-production to disc sparkles the best, but MIB II is no slouch having a gorgeous, crisp and thin layer of grain that looks very organic. The third film itself has also had what looks to be some artificial grain applied to help it look more organic.

Each film gets a brand new, robust and immersive Dolby Atmos audio mix (compatible with TrueHD 7.1). These films really benefit from this relatively new object-oriented sound format and the additional overhead channels, spreading lots of atmospherics, solid sound effects, and music through the overheads and surround channels. Dynamic range is superb and dialogue is crystal clear. We also get an abundance of low end to handle the booms, blurps, and other sundries.

There are a substantial number of special features included in the Men in Black Trilogy, all of them contained on the included Blu-ray discs, but, unfortunately, it is all older, ported-over material that has been previously released on Blu-ray and DVD. Digital HD is also included along with the feature films on standard Blu-ray Disc.

There probably will not be another Men in Black with these original cast members, but then again, who knows? Star Wars came back with the original people from 1977. That said, if you’re a fan of this popcorn franchise it has never looked or sounded better even if Sony disappoints by not adding any new video special features.