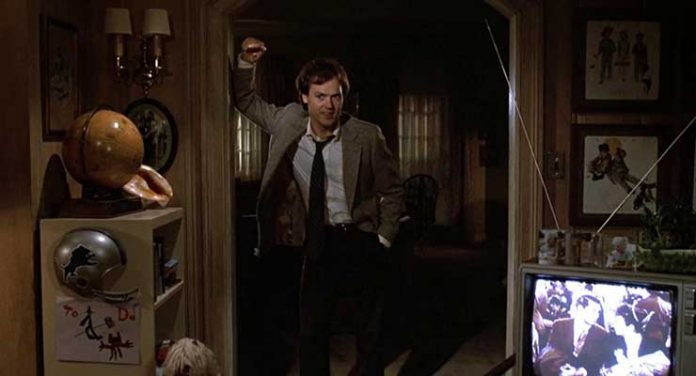 Mr Mom was a breakout 1980s comedy that was directed by Stan Dragoti who also directed other mindlessly forgettable ‘80s comedies starring big name actors who would go on to bigger and better things like The Man with One Red Shoe and She’s Out of Control. The screenplay for Mr. Mom came from arguably the undisputed king of 1980s movie making, John Hughes who provided the decade with such iconic decade defining films like Pretty in Pink, Sixteen Candles, and The Breakfast Club. While those Hughes films dealt with teenagers and their problems, Mr Mom concerned itself with adult issues, but it’s obvious from the get-go that Hughes was not yet, anyway, comfortable with writing about adults.

In what by today’s standards would seem like an absurd premise, the story follows the story of a man, Jack Butler (Michael Keaton), who gets laid off from his factory job and his wife Caroline (Teri Garr) must return to the workforce in an ad agency leaving him to take over the domestic duties as a househusband, a job he is ill prepared for.

This simple premise gender role reversal, cliché and even the idea of the inept male caregiver versus the female housewife in the workforce who finds herself unable to stop acting like a mom (at one point Caroline unconsciously begins cutting up her boss’ steak for him) may have seemed quaint in 1983, but even then it was not really that funny or even realistic. I say this as a child of the 1980s and the product of a single mother home and a family full of nearly all women who have never been housewives. Even the oxymoronic title of “Mr Mom” seems like a strained attempt at humor, as if to suggest a man taking care of his family is an oddity and, you know, isn’t just, a dad.

It’s not like the film doesn’t have its genuinely funny moments. Keaton’s Jack Butler slowly drifts into a fantasy world of daytime dramas and suspicions over his wife having an affair with her boss and Dragoti deftly interweaves and even melds the interludes of The Young and the Restless with Jack’s reality in one particular sequence. Still, the overall feeling of the film is one more of chaos and disconnected set pieces trying to constantly up the physical gags. Despite all of that there is heart at the center of the film and that is the one thing that keeps it grounded and watchable despite its many flaws. 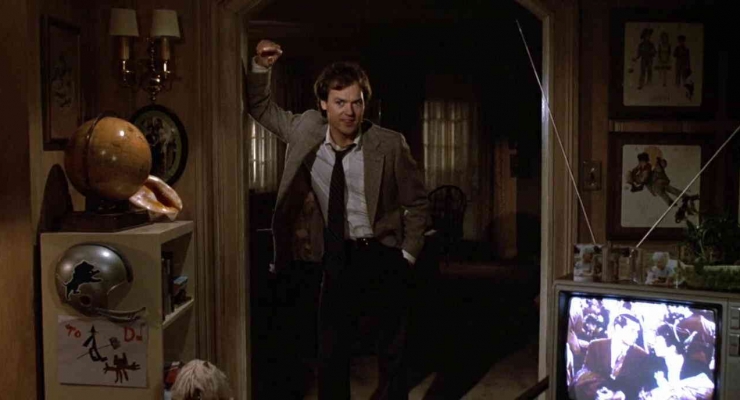 Shout! brings Mr Mom to Blu-ray in an AVC 1080p encodement framed at 1.85:1. The 1983 vintage film doesn’t look like it has had an extensive restoration by any means, but it looks acceptable given its age. There are quite a few instances where obvious tram lines and scratches can be seen, but grain and film softness are both kept reasonable and the overall detail and contrast are good. Colors look natural as well.

Mr. Mom gets a somewhat spruced up 5.1 mix in DTS-HD Master Audio 5.1 that has a narrow stereo soundstage, is front-heavy, and has a bit of low-level atmospherics in the surround channels. The original monaural mix is also included in DTS-HD Master Audio 2.0. The dialogue sounds more upfront in the mix in the mono version and the atmospherics a little unnatural, but it is certainly more authentic, obviously.

There isn’t much included on Mr Mom but Shout! does give us a new featurette that includes interviews with producer Lauren Shuler Donner and co-stars Ann Jillian, Frederick Koehler, Taliesin Jaffe, and Miriam Flynn looking back on the 1980s classic. There’s also the original theatrical trailer.

A very dated and at times painful to watch, cliché-riddled 1980s comedy, Mr Mom is best known for having a screenplay from John Hughes and featuring big name actors Michael Keaton and Teri Garr. While it isn’t one of the best comedies of the era and it hasn’t aged well it has its moments and looks reasonably good in this Collector’s Edition from Shout Select.