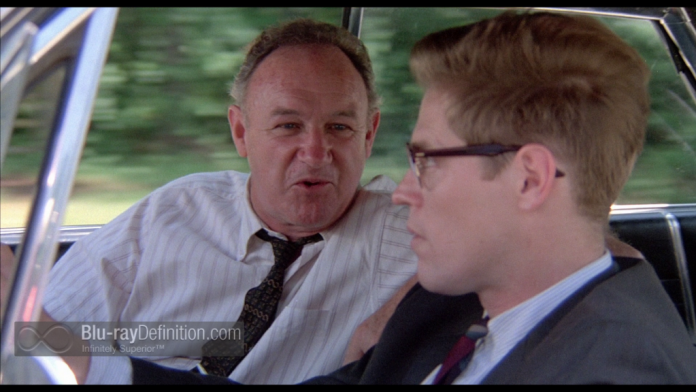 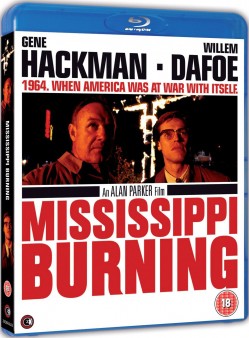 Mississippi Burning is director Alan Parker’s (The Road to Wellville) 1988 drama based on true events about the 1964 killing of three civil rights activists deep in Ku Klux Klan territory in Mississippi.

The all-star cast includes Gene Hackman and Willem Dafoe as a pair of FBI agents, Rupert Anderson and Alan Ward, assigned to investigate the disappearance of the missing civil rights activists, and Frances McDormand as a woman, Mrs. Pell, married to a local deputy, Clinton Pell (Brad Douriff), with ties to the Klan. Anderson (Hackman), the veteran

southerner is more cynical, crude, and forceful in his investigation and Ward (Dafoe), the lead investigator, is cool, collected, and by the books, but he uses the information that Anderson acquires by rubbing the local law enforcement the wrong way to his advantage. Eventually, Anderson also uses Mrs. Pell, who, unlike her unapologetically racist husband, has more sympathy for the Blacks.

The film gets right into the heart of the matter of America’s ongoing war with itself, that is the insanity and inanity of racism since its inception. And through the beautiful cinematography, often filled with barbarous violence of Mississippi ablaze and people being beat up or hanged, Mississippi Burning does indeed offer a powerful and provocative look at race relations in not only the South, but in America on the whole. It’s a message that still rings loudly today in a nation that seems forever in the vice of an internal conflict over race.

Mississippi Burning is a 1988 vintage production originally shot with Panaflex cameras and lenses on 35mm film stock. It arrives on Blu-ray from the UK’s Second Sight Films in what is a rather strong, “newly restored,” transfer. We get a lot of texture and a nice layer of natural looking grain. Some scenes do look like they are just a tad bit noisy, but not from the encodement, more from the filming techniques and a lack of excessive DNR being applied to scrub the grain. Colors are well saturated, but not overly so, offering up rich midtones, natural flesh tones, and primaries that pop nicely.

The original soundtrack comes in LPCM 2.0 stereo (48kHz/16-bit). It provides clean dialogue that is well balanced with the score and also has good stereo panning of sound effects.

Mississippi Burning stirred some controversy on both sides of the issue of racism and civil rights for its seemingly patronizing treatment of Blacks, intimating that the movement was reliant on the kindness of Whites to get a foothold. On the other side of the debate were those angered that the FBI was portrayed as being just as brutal as those racist Klansmen they sought to bring down. It is without a doubt impossible to create a film about such a hot button issue without setting off a firestorm of controversy about something, and perhaps that is a sign of just how well done this film, by an outsider looking in, the Brit Alan Parker, really is.