Set in Gundam’s Universal Century timeline, in U.C. 0093, 14-years after the original saga, the story brought to a head the rivalry between main antagonist Char Aznable and main protagonist Amuro Ray. Char resurfaces, head of Neo-Zeon, to lead them against the Earth Federation in his relentless bid to force humanity to become a space-only colonization species. He is determined to use an asteroid, Axis, and drop it on the remaining inhabitants of Earth, thus setting up the ultimate battle between the Federation and Neo-Zeon for supremacy.

This being a Gundam film, it of course features spectacular, and operatic space battles in the advanced mobile Gundam suits (mecha). By today’s standards, the animation seems quaint for a mecha franchise, especially after having just reviewed the fantastic Cross Ange, but make no mistake about it, Char’s Counterattack – and MSG in general – still holds up well. In fact, sitting through this film, I was in awe at the animation style and felt that, while the advancements have been welcome, there was maybe something lost along the way as well. There is a warmth and personality in these older, hand drawn, done on film, anime productions that is missing today. The CGI world looks sleek, but it is cold and removed. 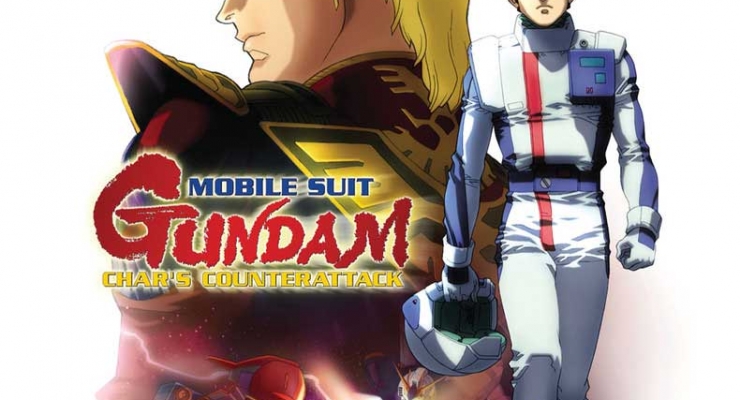 While the aspect ratio for Char’s Counterattack is listed as “16:9” on the packaging the image is windowboxed, so if you are viewing on a display with no overscan, you will be seeing black bars on all four sides of the image. Apart from that minor annoyance, this AVC 1080p transfer looks pretty good. The original film production looks like it has been cleaned up nicely, although there are some spots where a little damage and coarser grain can be spotted. Colors are vivid and the film grain looks natural. Some softness shows here and there, but it never looks too smooth.

It has been several years, probably not since the early days of the Blu-ray format, that I recall getting a new release that came with all of its multichannel and stereo audio in LPCM. That said, Mobile Suit Gundam: Char’s Counterattack includes the original Japanese-language in LPCM 5.1 and LPCM 2.0 stereo as well as an English dub also in LPCM 5.1 and 2.0 stereo. The 5.1 does not quite sound as discrete as a truly modern mix, being that this film hails from 1988. It is a little excessively reverberant and low-end heavy, but there are some good moments of sounds moving around, like a voice coming over a loudspeaker from your rear left with lots of reverberation. During the some of the quieter sequences is when the mix asserts itself more, ironically. The English dialogue sounds a little clearer, even if the cast doesn’t quite reach the same level as the Japanese cast.

We get only about 15 ½ minutes of promotional materials for the film in the form of Japanese trailers and a promotional video.

Mobile Suit Gundam: Char’s Counterattack was meant to be the end of the long saga between Earth Federation and Zeon (there would eventually be more conflict in the franchise, surprise, surprise). As a closing chapter, it is epic even if, like many anime stories, it tends to meander a bit. One doesn’t necessarily need to know the backstory to enjoy this spectacle, but it wouldn’t hurt.