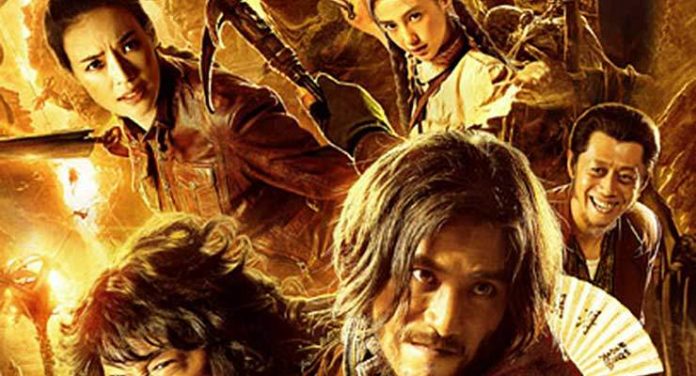 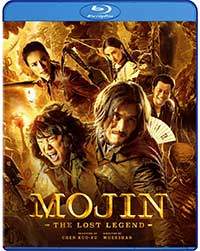 Mojin: The Lost Legend is a Chinese comedy/fantasy/action/adventure film from director Wuershan (Painted Skin: The Resurrection) based on the series of novels Ghost Blows Out the Light. Featuring a star-studded cast that includes Shu Qi, Chen Kun, Huang Bo, and Angelababy, the story revolves around a legendary trio of tom raiders (Qi, Kun, and Bo) Hu Bayi (Kun), Wang Kaixuan (Bo) and Hu’s girlfriend Shirley Yang (Qi) who, after retiring to New York in the 1980s, are drawn back into the grave robbing game when a mysterious rich Englishman backed by a strange cult leader hire them to track down a powerful artifact known as the Equinox Flower, which supposedly has power over life and death. More than for the money, Hu Bayi and Wang Kaixuan are drawn to the job when they discover its connection to their first love – Ding Sitian (Angelababy) – a girl from their youths whose affection they both vied for, but who died when they couldn’t save her when tragic events involving their comrades in an ancient tomb unfolded.

Mojin: The Lost Legend is superbly shot with eye-popping special effects that rise to the level of Saturday morning cartoons at some points. It is a little overdone, to say the least. While the drama and thrills keep one on the edge of the seat, the comedy always balances things out. Unfortunately, the film rambles…and rambles…and rambles. At two hours and seven minutes, Mojin could have used another pass in the editing room. It seems to have three very distinct acts. The first where not much occurs. There’s a fairly unnecessary prologue, a setup, then a stint in New York, then we get into the meat of the film when our main characters get down to the tomb raiding. This is the best part of the film, but even here, we are sidetracked mainly by the archetypical characters that are written into the film. It’s not the fault of the actors, they all do a wonderful job with their two-dimensional roles. It’s the fault of the director and the writers for giving us comic book level depth to the point where it’s almost campy by accident. Lastly, we get a third act, after all the action has occurred and everything has already resolved, as if Wuershan didn’t want it to end. Here, it’s an unnecessary epilogue that drags the film on for another twenty minutes and lets us know, again, that our main characters have come out okay.

Now, it isn’t all bad – there’s a lot of good to be taken away from Mojin: The Lost Legend. As stated before, the action is fantastic and, despite being over-the-top and at times cartoonish, the visual effects are quite spectacular. The actors keep us involved in what’s at stake, despite the lack of depth in their characters, in other words, they really work their material. Shu Qi gets the worst of it here, however. She, despite being a really good actress (I know, I’ve seen her really shine when given the opportunity), is really just portrayed here as a stereotypical, nagging, whiny, crying, self-involved woman who sort of hangs on her man, with only the slightest bit of lip service being paid to female empowerment. Despite that, she manages to be good and steal some scenes.

Mojin looks superb in this AVC 1080p encodement framed at 1.78:1 from Well Go. While much of the time, especially when we move to the extended tomb raiding portion of the film, Mojin takes part in shadows, it offers excellent contrast and lots of opportunity for pop, with brightly colored visual effects and lavish set design. The image looks very filmic and cinematic with no issues concerning compression noise, edge enhancement, posterization or color banding.

Mojin: The Lost Legend comes with a Mandarin DTS-HD Master Audio 5.1 mix on Blu-ray from Well Go USA and compared to the DTS:X mix for Ip Man 3 from Well Go that I had the opportunity to review recently, this one is actually a much more exciting and enjoyable soundtrack, proving it’s not about the channels or logo, but how well it’s done. The mix here is full and lush with a cohesive 360-degree soundfield that really wraps around and bathes you in atmospherics, lots of solid discrete effects, and big, deep low-end. The dialogue is clear and never dips below sound effects and well-balanced score. This mix will really give your sound system a workout. As a side note, the English subtitles that accompany the Mandarin soundtrack are one of the most disappointing I have seen on a Well Go USA release. By that I mean they are riddled with grammatical errors and typos. If you are like me and do not understand but a few words in Mandarin, then it is distracting. One other thing, do we really need to have the English subtitles for English-speaking people speaking English also, Well Go?

With some tweaking, Mojin: The Lost Legend could have been so much more than it is, even rivaling the likes of Tomb Raider. Instead, we get a decent popcorn flick that offers some stunning visual effects, great action and laughs, but runs on too long and has razor-thin characters. Still, the Blu-ray release is absolutely stunning offering up superb picture and sound.