As a filmmaker Darren Aronofsky (Black Swan) likes to blur the lines between reality dark fantasy, which is exactly what he does in his latest psychological thriller Mother! starring Jennifer Lawrence and Javier Bardem. Some may find the 21-year age difference between the leads Lawrence and Bardem horrifying enough especially in this post-Weinstein, #MeToo moment Hollywood and the rest of society is going through, but let’s table that for now.

The story deals with a married couple, simply referred to as mother (Lawrence) and him (Bardem) who go to a secluded, fixer-upper Mansion house for the purposes of working on their marriage and kick starting his writing (he’s a poet who has apparently been dealing with writer’s block for a while). Things begin to go sideways when unexpected guests arrive in the form of a dying doctor (Ed Harris) and his busybody wife (Michelle Pfeiffer). As the poet’s young wife continues to try to spend her time devoted to their marriage and fixing up the house, he becomes increasingly obsessed with bringing more and more people in to their home to fixate on him and praise his talents, first with the doctor and wife, eventually further crowds as things begin to turn cultish and even violent – or do they?

Mother! veers off into strange, unexpected directions that could not be predicted from the way the film begins. What seems like it will be a typical thriller revolving around a marriage on the rocks, like Fatal Attraction – forget it. There’s something uneasy about Mother! from the opening scene as Jennifer Lawrence seems to be searching anxiously through the house for her husband in the morning and is worried that he was “outside.” Is this younger wife overly possessive and insecure? Far from it as we will come to find out. Bardem’s character devolves into a total narcissist and the “mother” of the title, Lawrence, births the fixation of his cult of followers leading to a pretty gory scene in which Aronofsky dares to cross one of the few lines that filmmakers usually don’t cross. The open-ended ending leaves the film open to wildly different interpretations. Perhaps the horror that preceded was a nightmare, or maybe it was truly supernatural? What is for sure is you will likely not see a film as inventive, weird, or unsettling in all of 2017. 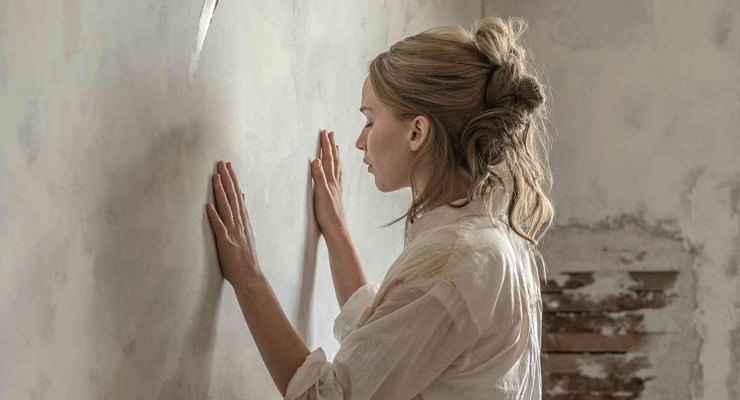 Mother! was shot on 16mm and 35mm with visual effects done on the Red Epic Dragon at 6K. A 2K DI (Digital Intermediate) was used in post processing and the film was mastered in Dolby Vision HDR (High Dynamic Range), which is also compatible with the HDR10 HDR format. The image is crisp and filmic and the colors are rich and vibrant thanks to the wide color gamut offered by the Dolby Vision mastering, which isn’t quite as apparent as in some other action blockbusters, until one sees the included Blu-ray and notices how much more muted the colors are in comparison. The highlights aren’t as bright as they often are in films mastered with HDR, until later with some scenes with fire and flashlights where show some real dazzle and bright white flashes and cut scenes that blaze.

Mother! arrives on 4K Ultra HD with an immersive Dolby Atmos mix that starts out mostly atmospheric with some panning of discrete sound effects into the surrounds and good use of the height channels, and as the film progresses and becomes more action-oriented, so to does the mix become much more aggressive.

Mother! is a shocking, sometimes vexing, but wholly original psychological thriller that goes to dangerous and unexpected places. You will either love or hate this film, but you will definitely love the quality of this satisfying 4K Ultra HD Blu-ray release with Dolby Atmos and Dolby Vision.