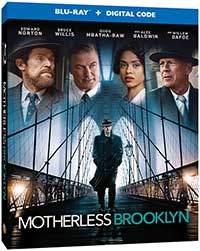 Motherless Brooklyn is a passion project of actor Edward Norton – who acts, directs, and wrote the screenplay – that has been in development since the early 2000s. Based on the novel of the same name from the late 1990s by Jonathan Lethem, Norton’s screenplay moves Lethem’s story from a contemporary setting and places it in 1957.

Norton plays Lionel Essrog, a detective works at a detective agency alongside Gilbert Coney (Ethan Suplee), Danny Fantl (Dallas Roberts), and Tony Vermonte (Bobby Cannavale). Their boss and mentor, Frank Minna (Bruce Willis), rescued all of them from an abusive orphanage when they were children. Lionel’s Tourette Syndrome causes him to act out with strange behavior and has kept him isolated from people his whole life, but his photographic memory makes him an ideal detective. The latter will come in handy when Frank is killed trying to broker a deal with some shady characters that the rest of the detectives at the agency knew little about. Wanting to honor the memory of the man who raised him, Lionel decides to pursue the investigation into what got Frank killed.

His investigation leads him to a popular black-owned jazz club in Harlem and a beautiful black woman, Laura Rose (Gugu Mbatha-Raw), who is working alongside a prominent community activist, Gabby Horowitz (Cherry Jones), who is fighting against the city’s urban renewal; poor and minority neighborhoods are being bought up and demolished, ostensibly due to them being ‘slums’. Lionel also connects Laura to the ‘colored woman’ he heard the men mentioning when he was listening in as planned as Frank was meeting with the strange, unknown men that eventually killed him. 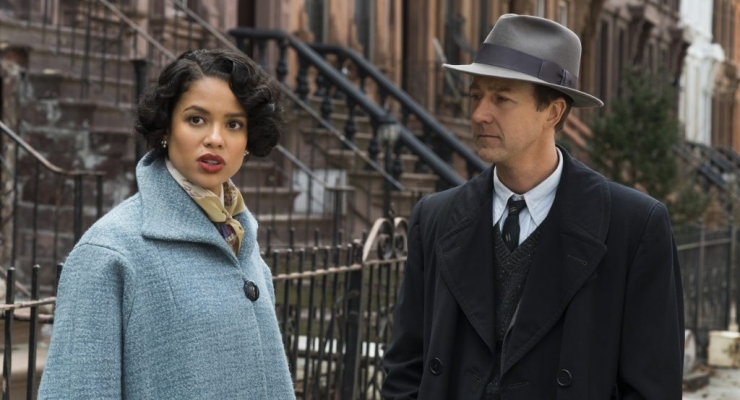 The investigation eventually leads all the way to the upper echelons of New York City power and a man named Moses Randolph (Alec Baldwin) –an obvious reference to the real-life Robert Moses who was often referred to as “the great builder,” but also left a legacy ion New York City of many broken neighborhoods — an unelected government official wielding even more power than the Mayor of New York City, and a possible corrupt scheme involving self-payments, and extortion.

Norton’s film on its surface is not a bad film. If it had been edited down for length it may even have been more palatable, because there is a point where there’s not much left to be said or done in Motherless Brooklyn and it feels like it is just spinning its wheels, especially after the big reveal at the end of what is at the root of everything that has been going on. He even has a grasp on the genre he is playing in – this neo-noir looks and feels as it should without feeling kitschy. Norton even puts on a strong performance as the Tourette Syndrome-afflicted detective and there’s excellent chemistry between him and Gugu Mbatha-Raw, who plays an unusual femme fatale brilliantly.

Motherless Brooklyn, however, cannot overcome its weaknesses to be a great film. Its biggest weakness is that, while it may not seem like a mere imitation or gaudy attempt at neo-noir, it does in fact come across as an uncredited remake of Chinatown with its plot transplanted to New York City. All of the earmarks are there – powerful elites enriching themselves at the expense of the public with a public works project, a maligned and somehow broken detective who can’t seem to avoid getting beat up, and of course the beautiful femme fatale who may or may not be tied directly to everything that’s going on. Couple all of that with a film that’s too long and this one is not likely to become a classic anytime soon.

Motherless Brooklyn was shot on Arri Alexa Mini with Cooke Speed Panchro and S4 lenses and Arri Alexa XT with Cooke Speed Panchro and S4 lenses and Panchro/i Classic lenses at 3.4K and used a 2K DI. The image is purposely desaturated with a preference toward bluish and greyish hues. This being a neo-noir, we also see a lot of shadows and blown out contrast. Overall there is strong detail and the image looks surprisingly filmic, but there are some issues with mild banding on the Blu-ray. The film is also available in 4K Ultra HD with Dolby Vision digitally where the colors and highlights ‘pop’ a little more, but even on my Gigabit internet via an Ethernet connection I was seeing some banding that I assumed was due to the streaming compression, but it may just be in the source.

The English DTS-HD Master Audio 5.1 mix is superbly balanced and punchy, with a natural dynamic range and good utilization of the surround channels to mix instrumentation of the jazz score around the listener as well as some of the foley effects.

There’s a very barebones collection of bonus features included here. We get some deleted scenes that add to what is already a film that’s a little too long a short making-of feature that tells of the long journey it took to get this film to the screen and an audio commentary from Edward Norton which is the best extra included here.

Despite its excellent score, great visuals and strong lead performances, Motherless Brooklyn is just an overly long Chinatown imitation. It does look and sound solid on Blu-ray – and 4K digital if you go that route.

Motherless Brooklyn is out on Blu-ray January 28, 2020 from Warner Bros.

3.3 / 5 TheaterByte Rating
{{ reviewsOverall }} / 5 User Rating (0 votes)
R (for language throughout including some sexual references, brief drug use, and violence)Rating Certificate
Class 5 Films | MWM Studios | Warner Bros. Pictures | Warner Bros. Home EntertainmentStudios & Distributors
Edward NortonDirector
Jonathan Lethem (based on the novel by) | Edward Norton (screenplay)Writer
144 Mins.Run Time
$35.99MSRP
28 January 2020Release Date
1.85:1Aspect Ratio
AVC 1080pVideo
English DTS-HD MA 5.1Audio
English SDH | French | SpanishSubtitles
English Audio Description | French | SpanishSecondary Audio
The Creative Content
The Video
The Audio
The Supplements
Summary
In this neo-noir passion project written and directed by actor Edward Norton who also stars, a Brooklyn detective who suffers from Tourette syndrome investigates the murder of his boss (Bruce Willis), who was also the man who rescued him and his co-workers at the detective agency from the abusive orphanage they were in as children. His investigation leads him to the upper echelons of the New York City government and a beautiful woman (Gugu Mbatha-Raw) who may be involved somehow. While Norton's film is a lush noir visually and he and Mbatha-Raw are excellent on screen together, the film is too long and the story about a broken detective and corrupt elites in his way feels like a weak remake of the classic Chinatown transplanted from the West Coast to the East Coast. Warner Bros.' Blu-ray release is a solid but rather barebones release.
What people say... Login to rate
Order by: