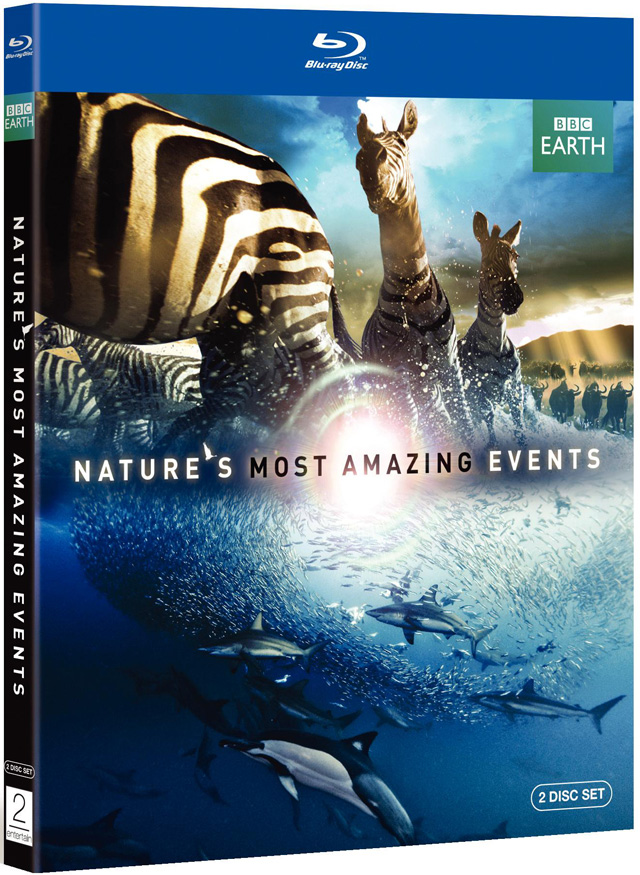 No one does documentaries like the BBC. Entering the high definition era with what is still seen by many as the standard for nature documentaries on the Blu-ray format, the BBC gave the world the sprawling Planet Earth series, which remains a top-seller to this day. In addition, they have produced such intriguing documentaries as Wild China, Galapagos, and Earth: The Biography, which have all been released to Blu-ray.

Following in that tradition, the BBC Natural History Unit has produced this nature documentary — Nature’s Most Amazing Events.  With six thematically linked episodes, the series covers the major climactic planetary events and their effects on wildlife’s struggle for survival across different regions. 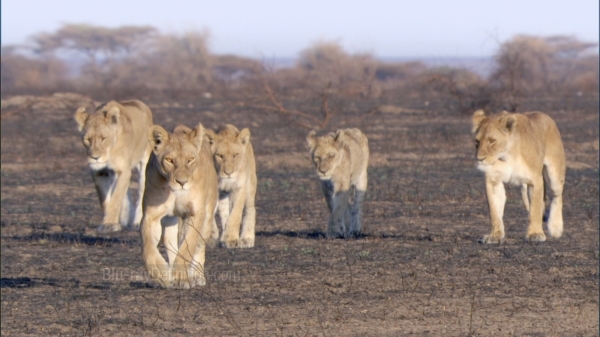 Episode 1: The Great Melt covers the Arctic, as the sun finally rises heralding the end of the long winter and creatures — large and small — struggle to survive as the ice melts away. Polar bears that rely on the ice sheet to traverse the Arctic and find their food come into jeopardy of starvation whilst arctic foxes and birds find for themselves a bountiful feast in the Arctic summer.

Episode 2: The Great Salmon Run is one of the series’ most humorous episodes. Shifting its focus to the temperate rainforests of British Columbia, “The Great Salmon Run” chronicles the grizzly bears long, arduous wait for the annual event that ensures their survival — the salmon returning to spawn. Watching the great bears fumbling around in the deep rivers trying to catch the fish is an amusing site, even if its serious business for the grizzlies.

Episode 3: The Great Migration moves to the famous Serengeti short-grass plains in East Africa and focuses on a pride of lions as the try to avoid starvation and dehydration during the dry season when the lion’s main food supply, the wildebeests, migrate away from their territory to follow the rains.

Episode 4: The Great Tide is truly a spectacle to behold. As winter approaches on the eastern coast of South Africa and the inshore waters cool, billions of sardines are drawn northward to feed on plankton — that’s when the party begins, so to speak. Whales, mega pods of dolphins, sharks and gannets all gather and work together to round up the sardines so all the predators can feed upon them.

Episode 5: The Great Flood keeps the series in Africa but shifts to the northern Kalahari. Focusing on herds of elephants, lions, and hippos all struggling to survive on the last drops of remaining water before the dramatic shift when the annual flooding of Botswana’s Okavango Delta. Turning 6000 square miles of desert into lagoons, swamp lands, and tiny islands, the annual flood is a crucial element of survival for the creatures in this region.

Finally, the series wraps things up with Episode 6: The Great Feast and springtime in Alaska’s coastal waters where humpback whales and their calves migrate all the way from Hawaii for the summer to enjoy the bountiful summer Alaskan waters. They must, however, clash with killer whales that attack their young.

Nature’s Most Amazing Events is a thoroughly enjoyable series about the cruel realities of the struggle for survival in the natural world. Each episode in the series is narrated by the always-brilliant Sir David Attenborough who has been at this sort of thing for so long, it’s amazing he still sounds so exited about his work. 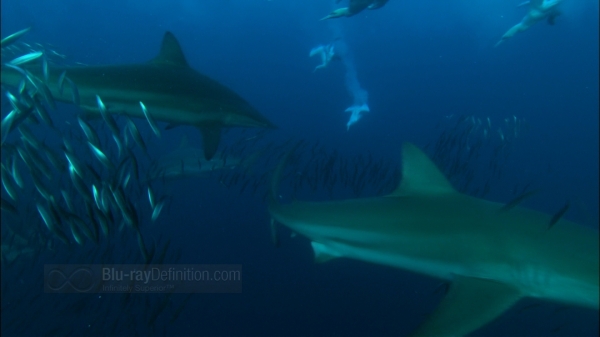 Coming to Blu-ray Disc in a 1.78:1 1080i/30 high definition VC-1 encoding spread across two BD50 discs, Nature’s Most Amazing Events is a bit of a mixed bag as far as video quality. At times looking absolutely stunning, sharp, and full of detail and other times looking soft, like a “smoothie” suffering from too much DNR (Digital Noise Reduction).

Close up shots look the best with strong detail that brings out the strengths of the famous BBC macrophotography. Distance shots, however, suffer from softness and show some very slight haloing around objects.  There are also instances in many underwater segments that show some artifacting like brief color banding.

These things are all amplified by the moments captured that look absolutely breathtaking, almost making one want to give this release a perfect score. As soon as things start to look brilliant, unfortunately, along comes another moment that is a letdown.  Nature’s Most Amazing Events is not one of the stronger HD outings for the BBC on Blu-ray Disc, but it is stilled filled with enough stronger moments to keep it from being a complete disappointment. 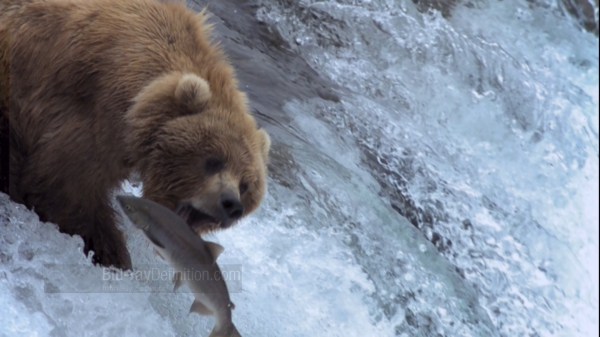 Nature’s Most Amazing Events is supplied with a disappointing English Dolby 2.0 audio mix as its sole option.  Constrained to simply two channels and a lossy encoding, the mix sounded a little on the claustrophobic side. Some effects could have used the breathing room of a 5.1 surround mix, but still the dialogue from David Attenborough was clear with good balance in the mix. Separation was not always distinct and some sound effects were a bit gritty sounding, but the mix was still able to convey a modicum of believability. 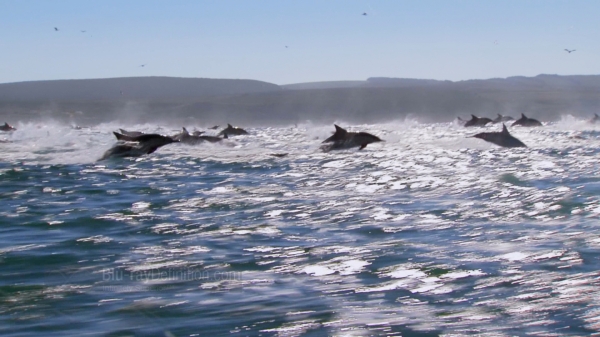 The “supplements” for Nature’s Most Amazing Events come in the form of “diaries” that act as addendums to every episode. Each behind-the-scenes diary gives a detailed account of how that episode’s documentarian went about capturing the stunning and often dangerous-to-acquire footage. They feel less tacked on than like a satisfying extension to each episode and should be viewed by all watching this series in order to gain an even better perspective on the subjects explored.

There is also a HD setup tool for calibrating your display. 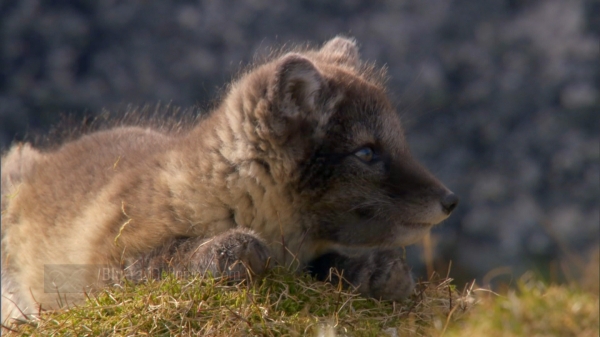 Nature’s Most Amazing Events is an intriguing documentary series with exhilarating footage from the BBC cameramen and engaging narration by Sir David Attenborough. Regrettably, that is all hampered slightly by an inconsistent video transfer and underwhelming audio track. Still, this is a nature documentary that fans of this genre will surely appreciate, despite its faults and it is recommended as a strong, if not perfect, addition to any collection.