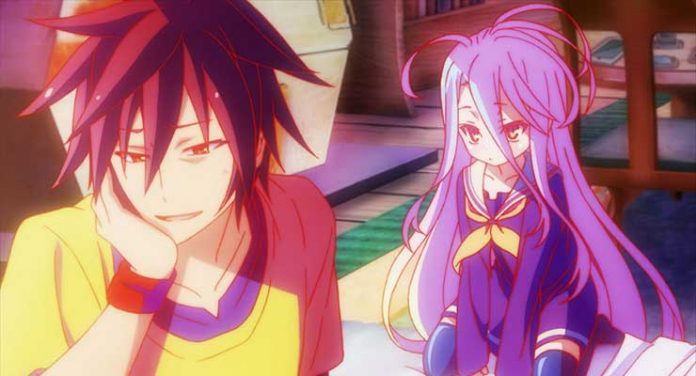 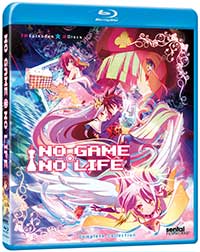 No Game, No Life is based on a light novel series by Kamiya Yū. The series follows genius gamers and NEETS eighteen-year-old male Sora (空) and his 11-year-old sister Shiro (白) who together are known as the unbeatable gaming team BLANK. The two are rarely separated; in fact when they are apart they suffer some serious anxiety attacks. When they manage to win a strange online chess match against a mysterious opponent named Tet, Sora and Shiro are sucked into an actual gaming world where the laws demand that all conflicts be determined by games. This is right up the ally of the wizard gaming team BLANK who, once inside this near fantasy world of games, are determined to not only beat the larger game, but to

beat the god of the world, Tet himself. Along the way Sora and Shiro find out that the world is decided amongst different Peoples who have different powers, with “Imanity” being the weakest of them all. After the two siblings become the new joint King of Imanity, they start their plan to conquer the other worlds, but Sora may have crossed a line in his first official act, betting the ultimate prize – Imanity’s game piece, meaning the very existence of the population would be in jeopardy.

The series is funny and action-filled and populated with a lot of colorful characters that are very fitting for this genre. What I mean by that is, with this series being all about gaming, it is almost like each character, mostly female with the exception of Sora, is like a character plucked out of an RPG. There is Jibril a flügel, a sort of witch-like character known for her species’ ruthless behavior, Stephanie Dola, the granddaughter of the previous king of Imanity who was infamous for losing games, there are the Warbeasts, who are half-beast creatures said to be very powerful and able to wipe peoples memories, and, of course as the somewhat pervy Sora fixates on, have girls with fury ears and tails. As these sorts of women/girls surround Sora, including his own little moe sister, the series folds in a lot of the harem and fan service elements that anime doesn’t seem to be able to avoid, but given that it does it in such an over the top and unique way, it goes almost unnoticed in this thoroughly delectable series.

And No Game, No Life is not just delectable because of the writing, but because of its candy-colored and highly stylized animation style that is just gorgeous to take in. It is colorful and fitting for a series focused on the gaming world, but also easily switches between multiple styles. It’s modern, its moe, its kawaii, its realistic or very artsy, or sometimes very digital in an “old skool” Nintendo sort of way. This is a fun and cutting edge anime style.

The digital animation looks outstanding for No Game, No Life. It is colorful and really bright. There are really no issues with this transfer outside of the slightest hint of softness that is more a product of some artistic choices than of the compression.

2.0 stereo tracks that sound fantastic, even without the extra channels. Dynamic range is superb, clarity is excellent and stereo imaging is really wide. The Japanese voice cast are really good at the voicing the characters. I’m not so sure about the English cast, but then I usually prefer the Japanese cast for anime. The

The six shorts, promo materials, and Japanese commentaries are a welcome change from the usual barebones extras on most Sentai Filmworks releases.

No Game, No Life is a funny, sexy, and outright silly series that shakes up genres to please any self-respecting otaku. The animation style is pure eye candy and the writing is quite witty. The animation looks fantastic on Blu-ray so recommending this one is a no brainer.