This 2001 anime gem is a work that spans the creative minds of five different individuals. It starts with writings of Thea von Harbou whose work was turned into the 1927 silent film Metropolis by her then husband, the director Fritz Lang. Tezuka Osamu then based his 1949 Japanese manga on Lang’s film, which was in turn developed into the anime film by director Rintaro (Astro Boy) and screenwriter Otomo Katsuhiro (Akira). Though this anime film shares very little plot in common with the original 1949 film or even the 1949 manga, the through line is quite clear.

Each of the works is a staggering, visual achievement set in a gorgeous, multi-level Metropolis. Tezuka’s film is set in this sparkling city where robots are the primary source of labor, but there is a growing distrust amongst humans over these machines and with unemployment on the rise, the humans blame the robots for their woes. The film opens up with a violent scene of a robot worker from the bowels of the city being shot down as it comes above ground where it is banned from being. As one of the powerful leaders of Metropolis, Duke Red, is working secretly on an advanced robot called Tima, he aims to use to control all of Metropolis and then the world, his violent adopted son Rock discovers his plan. The avidly anti-robot Rock determines to destroy the incredibly life-like Tima at all costs. Meanwhile a Japanese detective investigating the scientist working on Tima has brought along his nephew Kenichi and Kenichi and Tima begin to develop a strong friendship. Kenichi and Tima find themselves stalked through the various levels of Metropolis by the violent Rock who won’t hesitate to kill them both while fate of the city and the whole world hangs in the balance.

At its core Tezuka’s Metropolis, not unlike Lang’s Metropolis, is a parable about humanity’s unbridled desire to control its surroundings and the juggernaut of technology surpassing its own abilities. Like the Tower of Babel in the Bible, these constructions often come falling down over our heads just as Duke Red begins to lose control of Tima, his own son Rock, and the vision he had for using the advanced robotics in order to rule the entire world.

Bringing all of this together is a gorgeously animated cyberpunk world that owes much of its inspiration to Lang and the visual lexicon of such films as Blade Runner and The Fifth Element. Towering Art Deco sculptures and a sort of steampunk aesthetic as well in both the glistening above ground and gritty underbelly with a Dixieland jazz soundtrack transplant you completely into this visual and aurally stunning world. The character designs are more rounded than what we have come to expect from contemporary anime. They have sort of bulbous heads and belled feet. This is actually more in keeping with the look of Astro Boy, which is unsurprising given director Rintaro.

Metropolis is a film that will stay with you long after the credits role and a true classic of the genre, anime/animation or otherwise. Although the story is not a wholly original one, the characters connect with you on a human level from the beginning and visually it is undeniably a masterpiece that moved the genre forward in the same way a film like Ghost in the Shell did. 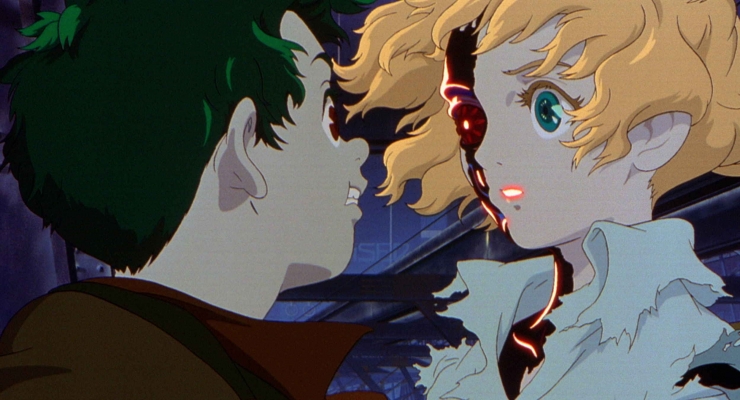 Metropolis arrives on Blu-ray in its original 1.85:1 aspect ratio encoded in AVC at 1080p resolution. The 2001 anime film, which was done on 35mm, looks gorgeous here. There are a few frames where some minor source damage can be seen, mostly in the darker fills, and a bit of film softness is present, but for the most part the image looks clean and organic with good colors and detail hasn’t been smoothed over.

There are a few options included here and they each offer wonderfully pleasing results. The original Japanese-language is included in DTS-HD Master Audio 5.1 and LPCM 2.0 stereo with both original translation and U.S. theatrical release subtitles. There is also an English dub in the same DTS-HD Master Audio 5.1 and LPCM 2.0 stereo options. Additionally an English dubbed audio version of the English subtitles is included. Getting down to the sound, this is a fantastic mix that makes the most of those six channels spreading sounds around, extending the low-end, and utilizing a lot of atmospherics to let us know we are traveling beneath the sparkling Metropolis above. Dialogue is clear and full. The Japanese voice cast is the more solid choice to go with here, but the English cast do a surprisingly good job as well and dub fans won’t be disappointed.

The extras included with this release aren’t exactly a windfall and they aren’t even new, but they are still interesting. The Animation Comparisons show how the beautiful cityscapes of Metropolis came together and the albeit brief interview offer just a little insight as does the half-hour-long making of.

A film that has to be seen to be understood what an achievement it was, Metropolis is one of those marker points in the genre of anime that one can point to say “this is when such and such changed”. This Eureka Entertainment dual format release looks gorgeous and sounds great. It’s a must-own release. This Dual Format SteelBook release hits the UK 16 January 2017 to be followed by a standard Dual Format release 13 March 2017.