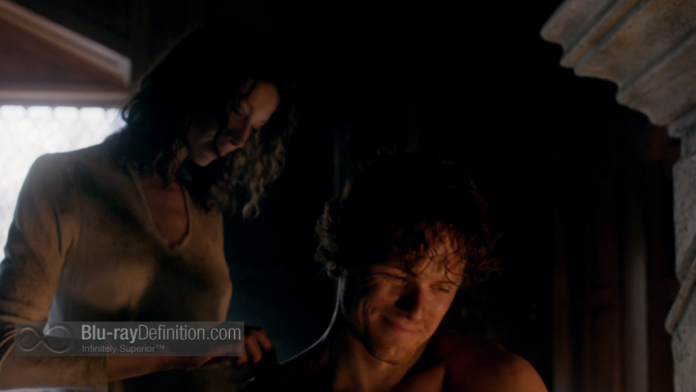 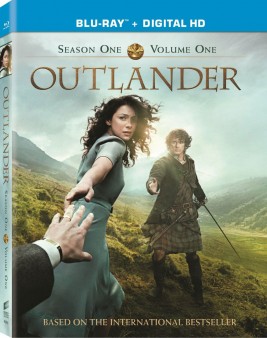 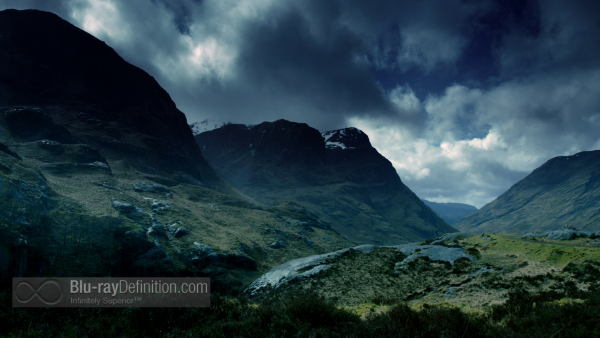 It seems the Starz network has a breakout hit with the adaptation of Diana Gabaldon’s best-selling series of fantasy/sci-fi romance Outlander series of novels. The story follows Claire Randall (Caitriona Balfe), a British combat nurse in 1945 at the end of World War II who is seeking to reconnect with her husband after five-years apart due to the war. On a getaway to Scotland with her husband, Claire wanders away to explore an ancient pagan stone monument and mysteriously ends up transported to the 18th century. There she becomes embroiled in a 1743 civil war between England and the Scottish Highlanders, finds romance with a dashing young Highlander named Jamie Fraser (Sam Heughan), but also raises the ire of notorious British Captain Black Jack Randall (Tobias Menzies who also doubles as Claire’s husband), an ancestor of her husband.

Outlander is clearly aimed at a certain demographic, mainly female, and the overwrought romance can become a bit silly at times. That said, there is more than enough adventure, fighting, and, oh yes, sex (this is premium cable after all) to make up for that. The battle sequences don’t reach the level of bloodiness and gore as, say, Game of Thrones, and neither do the sex scenes get as raunchy, but what you will find as you watch, is that the bells and whistles, so to speak, are mere window dressing to what becomes a quite enthralling story. Claire Randall (brilliantly portrayed by the strikingly gorgeous Balfe), is the center of the plot at all turns. The titular “outlander” of the series, if she’s not being accused as a spy or in danger of being raped by some rogue, she’s being coveted as a healer (her knowledge of modern 20th century medicine comes in very handy in the 1700s).

The surroundings are all gorgeous thanks to beautiful cinematography and also the elaborate historical costumes by Terry Dresbach and Glenne Campbell. They’ve done well to place us in both the 18th and mid 20th century, seamlessly leaping through time.

Still, it is the epic love story that keeps us coming back for more, even if it can become just a tad saccharine. Claire’s struggle to stay true to her present-day (1945) husband yet adapt to survive and thrive in the past, and, that of course, means falling in love with her “protector” Jamie is what will keep the ladies swooning, and it is masterfully played, touching, and, at times amusing the way Claire schools her brutish men about how women can handle their business, even her eventual lover, Jamie.

Part 1 of the series ends with Claire in peril, a not unusual circumstance, and Jamie having to rush to her rescue. We’ll see how it all works out with the second part returning in April. 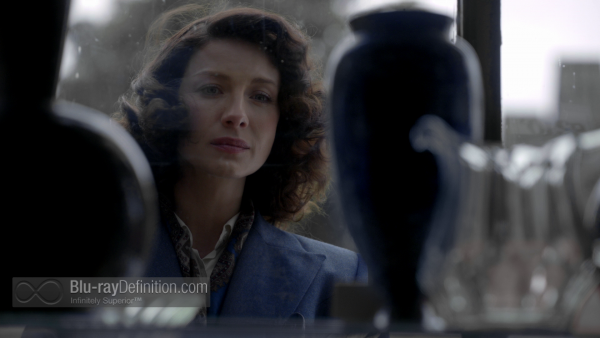 The HD production for Outlander is stunning in this AVC 1080p transfer to Blu-ray from Sony. Detail is sharp, contrast is wide, and blacks are inky deep without crushing. Colors are vivid without being overly saturated, such as the reds of the English “red coats” military uniforms. No issues emerge with post-processing and only the slightest hint of video noise can be seen, although it adds an organic feel to the picture. Certain scenes, mostly those that flash back to the war in the twentieth century have heightened noise or added digital grain, which is an artistic choice and nothing to do with the transfer or compression issues. It looks gritty, but does not take away from the enjoyment of the image at all. 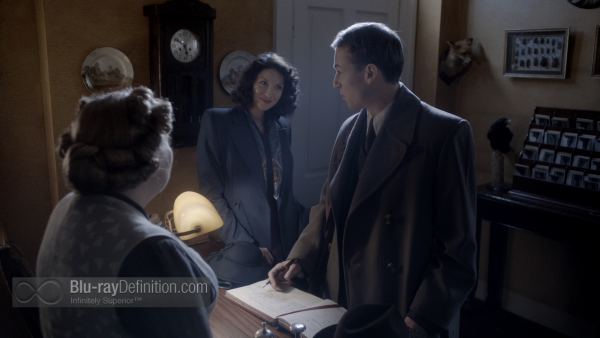 An English DTS-HD Master Audio 5.1 (48kHz/16-bit) is the sole audio option, but it is an excellent option. Matching the picture in quality, this wonderfully balanced, clear and atmospheric audio mix provides full and natural sounding dialogue and picks up everything from the slightest crackle of a hearth in the surrounds to the thunderous gallop of horses moving through the soundstage with a beefy low end. The clank of swords is accented by light and airy high frequencies that do not become fatiguing. 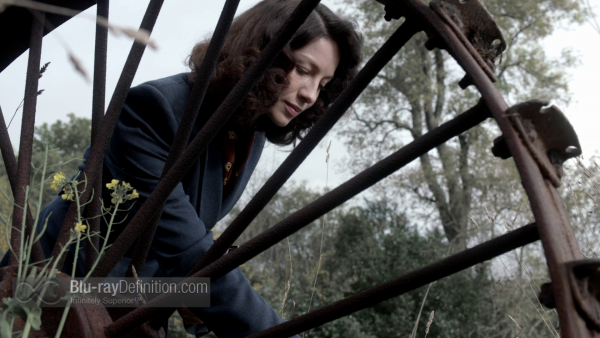 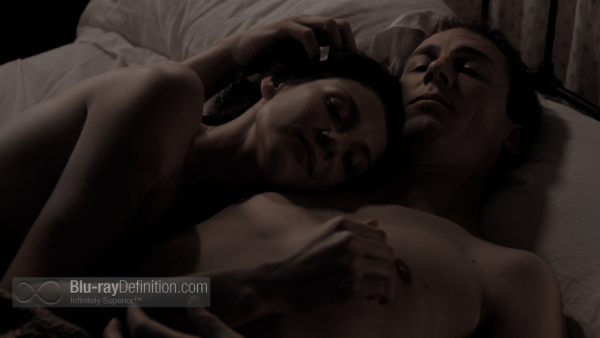 Romance, historical fiction, sci-fi, and fantasy come together in this epic novel adaptation Outlander. A beautiful looking and engaging story, if at times overly romantic, this series will surprise many and helps to grow Starz’s increasingly expanding and strong original programing slate. 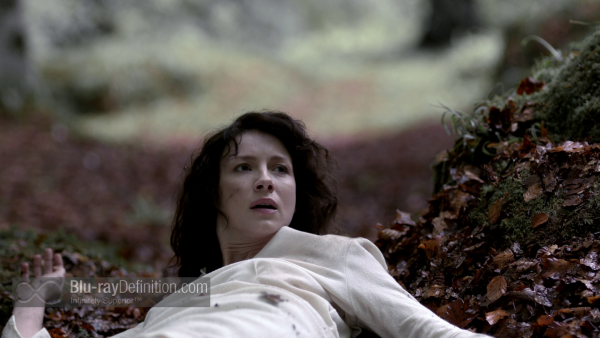 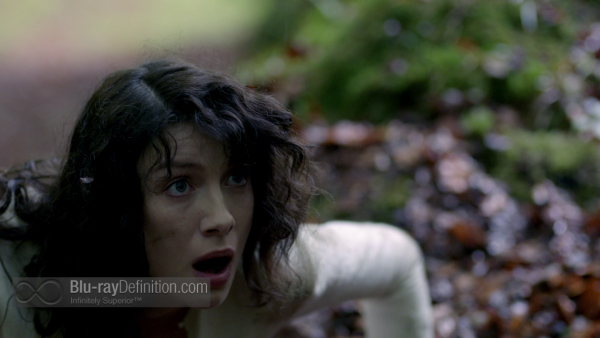 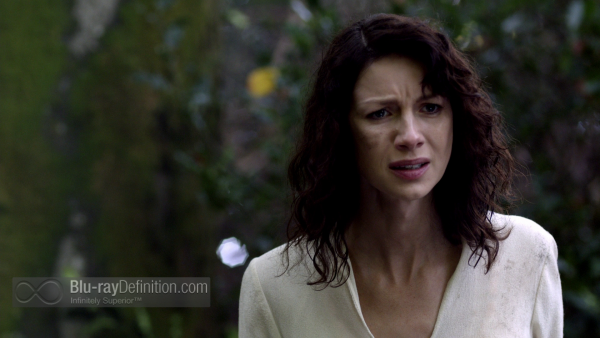 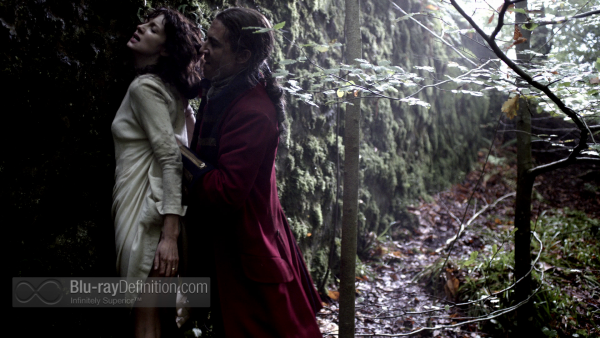 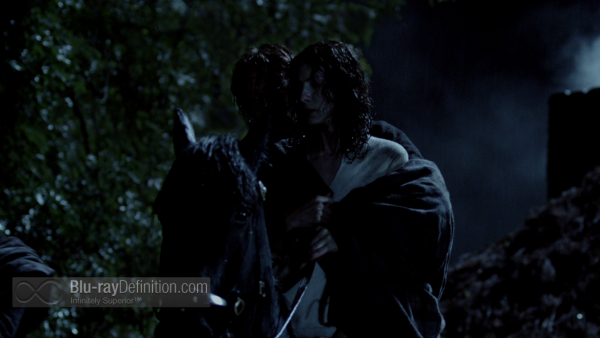 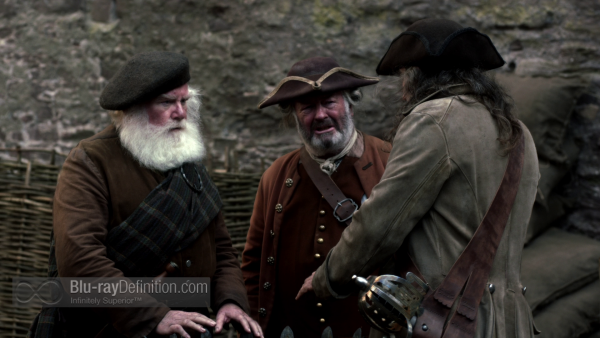 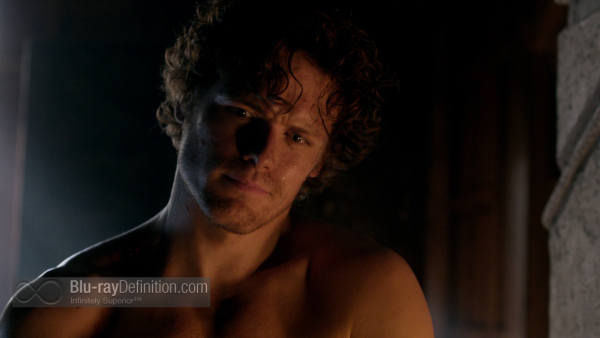 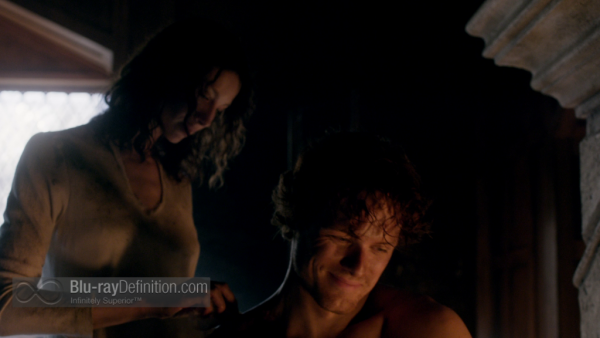 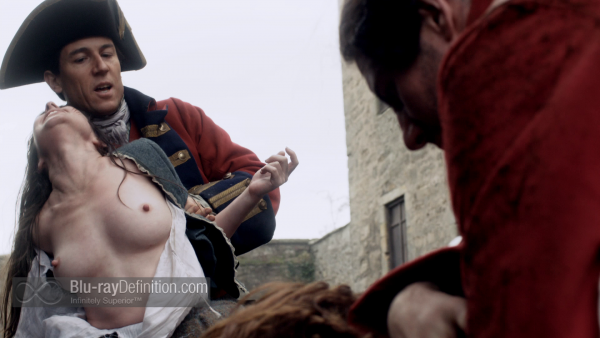 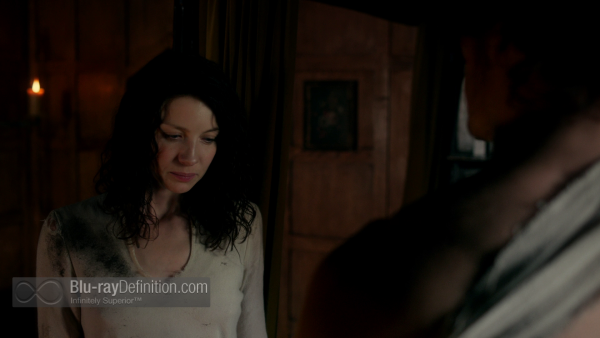 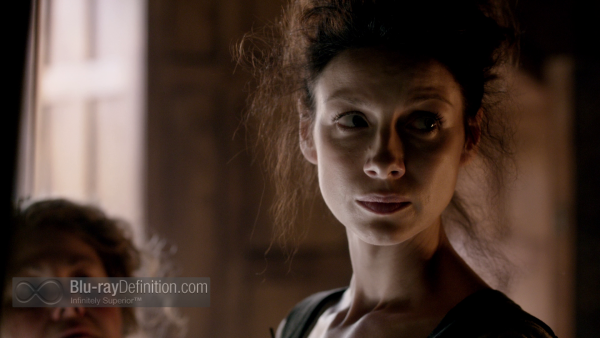 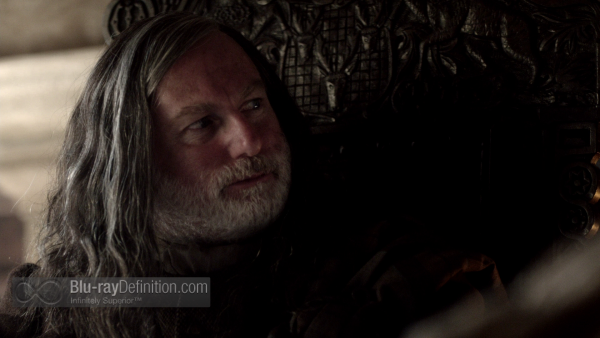 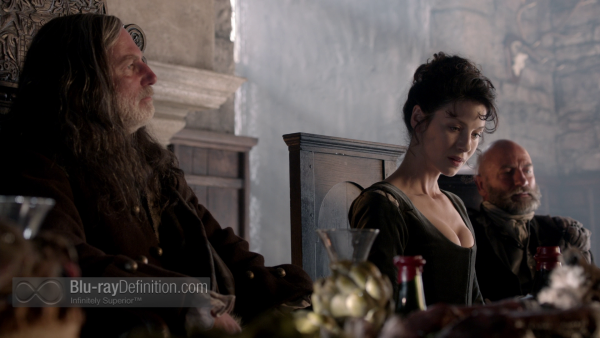 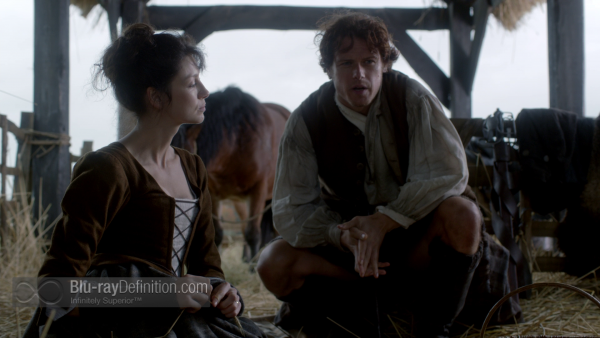 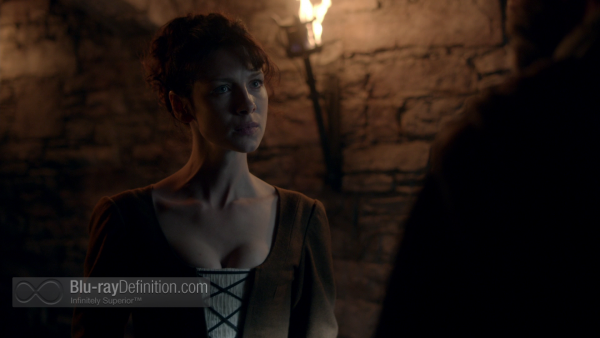 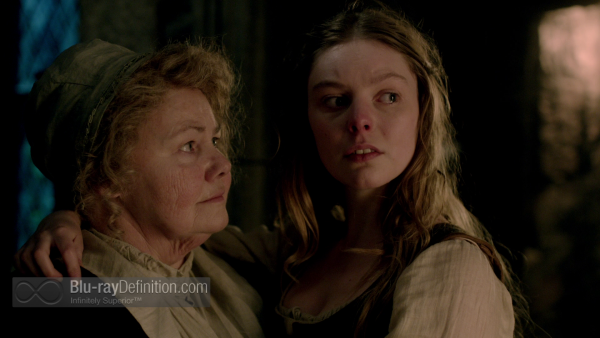 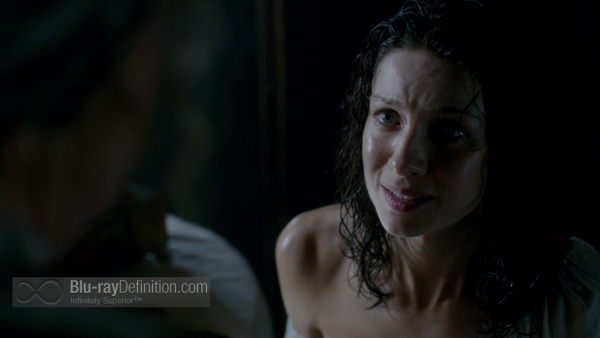 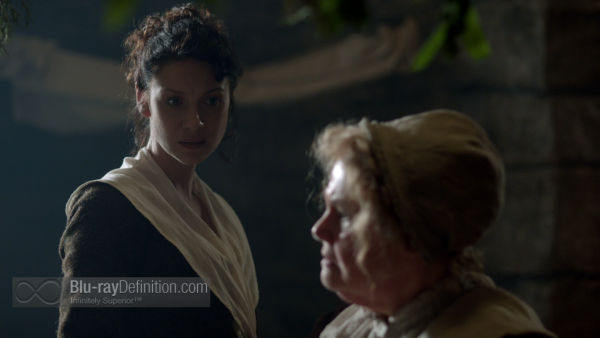 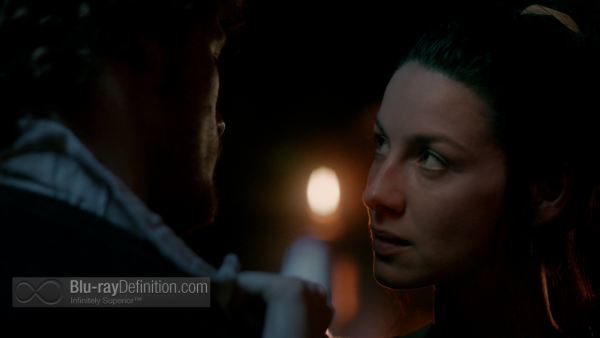 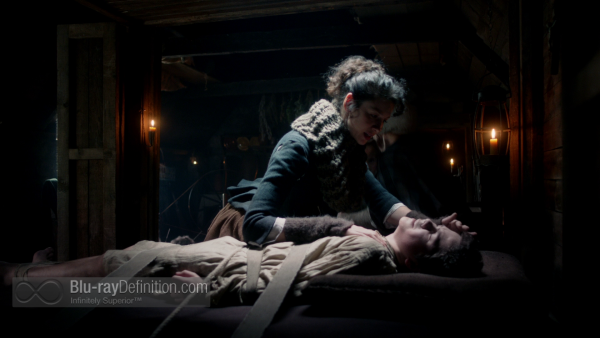 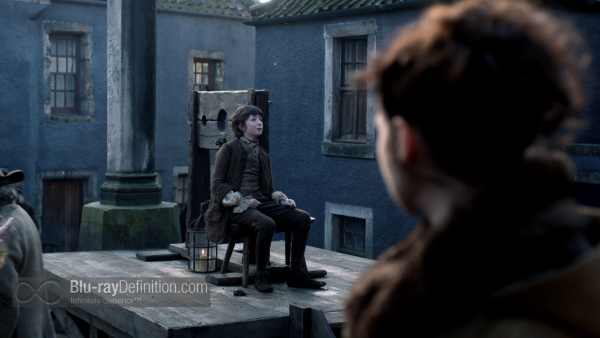 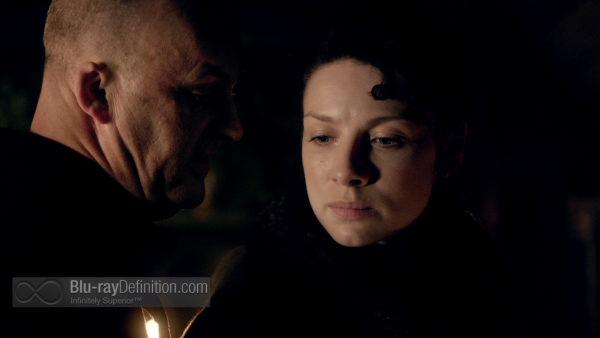 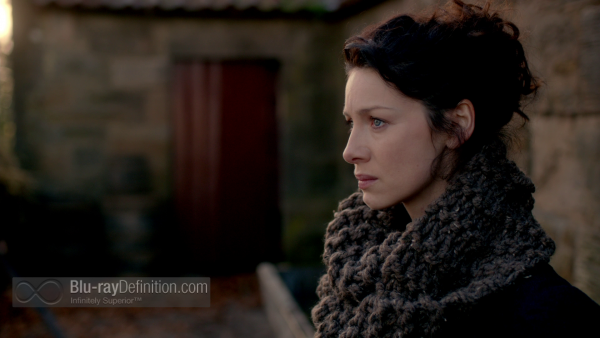