Overlord, directed by Julius Avery (and completed unrelated to the anime series of the same name) breathes new life into the well-worn war movie genre. This story tracks a small band of American soldiers sent behind enemy lines just before D-Day on a mission to bring down a signal tower. What they find, however, has far broader implications.

The soldiers, led by Ford (Wyatt Russell) and the wide-eyed Boyce (Jovan Adepo), find themselves trapped in a small French village, holed up in young resistance fighter Chloe (Mathilde Ollivier) home, where they eventually cross paths with Nazi commander Wafner (Pilou Asbæk), who is helping to run a covert lab where the Nazi’s are running strange, supernatural experiments. In order to save Chloe’s younger brother and stop the German’s, the soldiers must sidetrack from their original mission, infiltrate the lab, and bring it down.

Overlord is a tense genre mash-up of traditional war movie and B-Movie horror that only grows more raucous, action-filled, and pulse-pounding. Director Avery is adept at keeping the pacing at edge-of-the-seat level, while it never slips into uncontrollably quick and impossible to follow. Even as the story escalates through increasingly unexpected plot twists, they never nuke the refrigerator. It stays visceral, bleak, and shocking with easy to fathom heroes and villains. This is certainly an instant classic genre-bending wild ride. 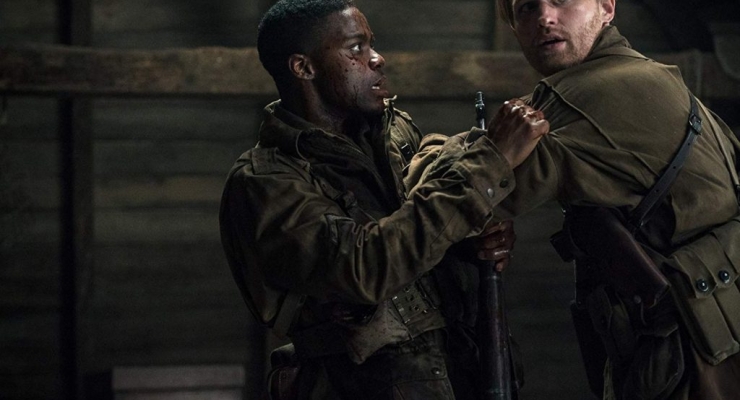 Overlord was shot on Arri Alexa Mini, Arri Alexa SXT, and Panavision cameras at 2.8K and 3.4K resolution in the anamorphic format. It comes to 4K Ultra HD framed at 2.39:1 in an HEVC 2160p (4K) encodement with Dolby Vision HDR. It’s a purposely gritty and at times desaturated image, but the digital production looks awesome in this 4K release. The Dolby Vision imparts excellent ‘pop’ in the highlights, extended nuance in the shadows and overall there a lot of finer detail.

You haven’t heard awesome until you’ve heard this rollicking Dolby Atmos mix for Overlord that utilizes all the channels to their full extent. The overheads, surround backs, surrounds and definitely the subwoofers get a major workout, even as the dialogue remains full and clear. High end never gets fatiguing and there’s wide dynamic range.

There aren’t a lot of features included with Overlord, but there is a 51-minute-long special feature on the included Blu-ray broken down into separate parts exploring the film’s production that’s well worth watching. Digital copy is also included.

Overlord on 4K Ultra HD Combo Pack is a must have reference release that will provide a rollicking amount of home theater entertainment. Bring this one out to showcase your system and as an enjoyable, well-made popcorn flick.

Overlord is out on 4K Ultra HD Combo Pack February 19, 2019 from Paramount