For 2006’s Pan’s Labyrinth, Guillermo del Toro returned to the sort of dark-fantasy drama that he began to hone with films like Cronos, Mimic, and The Devil’s Backbone. By this time, however, he had perfected the formula and delivered a masterful and haunting film set in the wake of The Spanish Civil War.

Young Ofelia (Ivana Baquero) arrives in the Spanish countryside with her pregnant mother Carmen (Ariadna Gil) who has recently remarried to the sadistic military captain Vidal (Sergi López). Since Ofelia’s mother is suffering a difficult pregnancy, she spends most of her time bedridden, and the shy young Ofelia, who likes to disappear into the world of her books tries to seek out the comfort of the maid Mercedes (Maribel Verdú) and avoid the cruelty of her stepfather Vidal, whose cruelty keeps reaching new depths as he tries to hunt down a remaining group of rebels hiding out in the surrounding forests.

Ofelia has always had a vivid imagination, but when she arrives at this new home, she meets a mythical faun, Pan (Doug Jones) who informs her she may be the princess of a mythical underground world. The more she believes, the more Ofelia begins to see and to crossover into this magical world of fauns, fairies, and giant toads. Is it real, or is it just a coping mechanism of an adolescent? The truth will have serious consequences when Ofelia is put in a position to decide what to do about the life of someone very important to her.

Del Tor’s film is visually stunning, a brilliant mix of practical effects and CGI that catapults us into an allegory about a young girl’s coming of age, a dysfunctional and abusive family situation, and how our myths influence our lives.

The clever part of Pan’s Labyrinth is the viewer is never really certain if it is a full-on fantasy where the fantastical elements are meant to be taken literally or just as the runaway imagination of a little girl using them as an escape. Depending on how the film is interpreted, it is either a tragedy or one of hope. 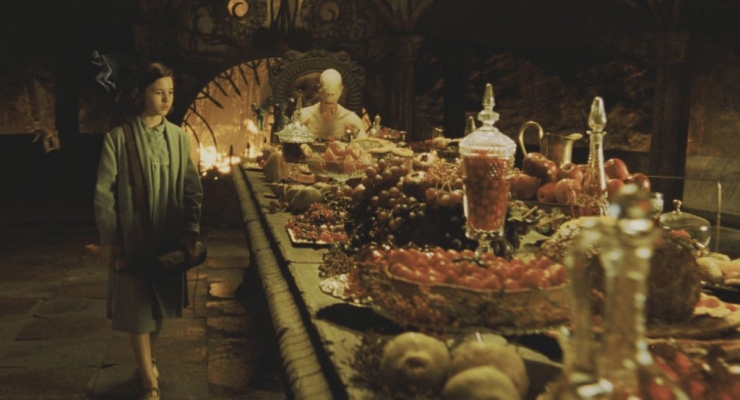 Pan’s Labyrinth was shot on 35mm Kodak Vision2 200T 5217, Vision2 500T 5218, and Vision 250D 5246 film stock using an Arriflex 435 ES camera with Zeiss Ultra Prime and Variable Prime lenses and a Moviecam Compact camera with Zeiss Ultra Prime and Variable Prime lenses and mastered with a 2K digital intermediate. The film has always had beautiful visual effects but has never exactly looked spectacular as far as visual quality, kind of similar to Lord of the Rings. Much of the color palette, especially in the “real world” portion of the film is dark, cold, greens, greys, and blues with a desaturated look. The fantasy world portion of the film brings the most splashes of color and warmth, with more earth tones, reds, oranges, and brighter lighting, but there has always been a sort of soft patina, a layer of soft graininess and soft lighting that kept this films from looking really crisp, and this is all an artistic choice. This 4K Ultra HD release, coming in a 1.85:1 HEVC 2160p (4K) encodement with HDR10 doesn’t really change any of that, but the film does look a little more colorful in the sense that there is more nuance in the palette of colors. The dynamic range, however, is limited still, so there isn’t too much ‘pop’ in the highlights. Candlelight, for instance, doesn’t really blaze very brightly, but the color of the fires has more variation than on the Blu-ray.

Pan’s Labyrinth on 4K Ultra HD comes with its original-language Spanish (Castilian) DTS-HD Master Audio 5.1 mix as the sole audio option. The 7.1 mix that appears on the accompanying Blu-ray is not present. That said, this is a very pleasant and well-balanced mix that places us in a lush fantasy world. It has superb dynamics, going from quiet whispers to booming explosions and gunfire while supplying clean full dialogue.

There is an abundance of interviews with Del Toro on this Pan’s Labyrinth release as well as other members of the crew included here, but they are all old bonus features in standard definition. The audio commentary is still a great listen.

A moving, classic modern fairy tale that has the feeling of a story that has been around for centuries, with Pan’s Labyrinth Guillermo del Toro proved his mettle as a unique voice in filmmaking. This 4K release gives the movie a good update, but not perhaps as stunning an upgrade as some other films that have been remastered to 4K.

Pan’s Labyrinth is out on 4K Ultra HD Combo October 1, 2019 from Warner Bros.