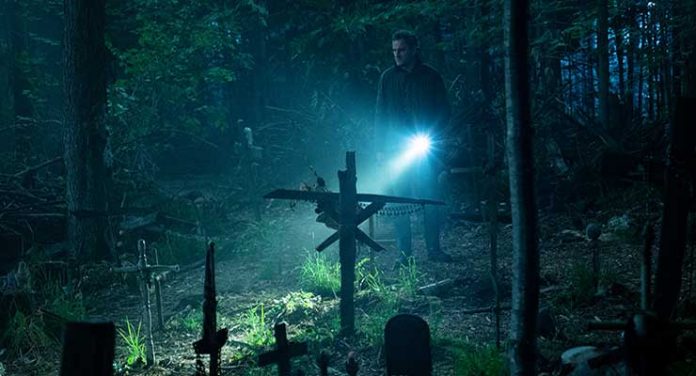 Pet Sematary is the 2019 remake of the 1989 adaptation of the Stephen King novel and film of the same name. This new edition stays pretty close to the original film and to the traditional horror tropes, veering away from what has become a tired gore porn genre of today. While this story of a family moving into a new town, their children coming across strange occurrences while the parents in their more cynical adulthood are quick to dismiss what should be danger signs should be a welcome return to a truly scary and traditional classic genre of horror, the fact that it is a retread of such a classic film gives it a tough job selling itself.

Dr. Louis Creed (Jason Clarke) and his wife, Rachel (Amy Seimetz), relocate from Boston to rural Maine with their two young children. They immediately notice the local children in what appears to be ritualistic garb heading towards a local burial ground. Their young daughter Ellie (Jeté Laurence) goes out exploring and find the burial ground to be a local pet cemetery, misspelled as “pet sematary.” When her cat dies, local Jud (John Lithgow) convinces Louis to go out at night and bury the cat the in the eerie cemetery, which the two of them do. That’s when things turn strange – the cat returns from dead, now feral, yet Ellie never knows her cat had died. And things only get weirder from there when tragedy a tragedy strikes again and the temptation to use the burial ground’s powers is too much to resist.

Pet Sematary is heavy on the atmosphere and directors Kevin Kölsch and Dennis Widmyer keep an amazing sense of terror, suspense, and gloom throughout. The visuals also play a big part in the horror – the creepiness of the burial ground drenched in blue-tinted moonlight and inky shadows, decrepit wooden crosses reaching up like skeletons out of the ground silhouetted by an indigo sky.

Unfortunately, mood can only go so far towards holding one’s attention, and this film’s predictability and familiarity are its downfall. Its plot twists are telegraphed from the opening scenes and anyone familiar with the original will already know the basics, which spoils the surprise and lack of surprise softens the scares for any horror film. 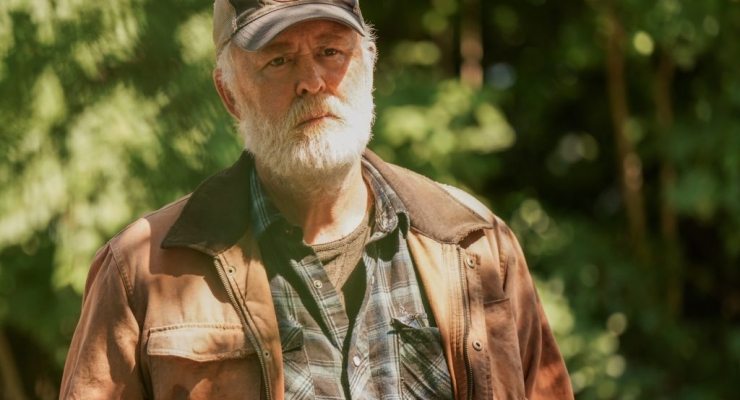 Pet Sematary is an original anamorphic digital production shot in ARRIRAW 2.8K and 3.4K resolutions on the Arri Alexa Mini and Arri Alexa SXT Plus cameras with Hawk V-Lite anamorphic lenses. The film was mastered in Dolby Vision HDR with a digital intermediate and arrives on 4K Ultra HD Blu-ray in a 2160p (4K) encodement framed at 2.39:1 with Dolby Vision. The high amount of detail is immediately noticeable and the extended shadow nuance and color gamut from the Dolby Vision does wonders, particularly in the graveyard scenes where the highlights such as flashlights and the moonlight ‘pop’ brilliantly against the multiple blue-hued shadows.

Pet Sematary comes with an immersive, object-oriented English Dolby Atmos mix on both the 4K Ultra HD disc and the Blu-ray Disc. This is fantastic mix perfectly suited to a horror film, with oodles of atmosphere mixed through the surround channels and overhead/height channels. Jump scares really scare, falling down on your head and creeping up from behind.

There have been a lot of great horror films coming out in the past few years that that have both gone back to traditions and flipped the genre, films like Get Out, The Limehouse Golem, The Babysitter, or The Witch, this remake, while it invokes some of the classic horror of its original source, just feels all too contrived and uninspired. That said, the 4K Ultra HD Blu-ray release is brilliant, particularly the Dolby Atmos audio mix which is enough to have you jumping out of your seat.