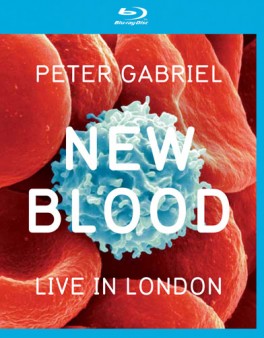 Full disclosure: put me down in the Peter Gabriel fan camp and mark me down as one of the people who thinks Genesis started a slow decline when Gabriel left, regardless of how many top 40 hits they may have had or not. Also mark me down as definitely thinking Gabriel’s solo work is far superior to Phil Collins’. With all of that being said, when I heard Gabriel had recorded an album with all of his songs performed with an orchestra, I was more than skeptical. “Oh, no,” were my exact words. “Not another old rock star going soft and putting out some elevator music!”

Peter Gabriel: New Blood – Live in London finally arrived in my mailbox and I opened it up to review with much trepidation, but by three tracks in, I was convinced. Perhaps it has something to do with my own love of classical music to begin with, but I immediately recognized that not only was much of Gabriel’s music actually very well suited to orchestration, but that the arrangers working with him, John Metcalfe and Nick Ingram, and the 46-musician strong New Blood Orchestra were uniquely suited to bringing Gabriel’s music into this format.

Certain songs from his nearly forty-year solo career immediately jump out as being perfectly suited to classical orchestration, such as the blatantly obvious “Solsbury Hill,” or “Mercy Street.” Listening to Gabriel’s music orchestrated, one realizes that even his more electronic music has always been rooted in an organic, primal

source, such as “San Jacinto” or “Biko,” which here becomes a sort of Bolero-esque funeral march. “The Rhythm of the Heat” is a real showcase for the orchestra and Gabriel’s darker, gloomier bent of composition, sounding everything like a post-modern classical piece.

In all, Gabriel performed 22 songs from his immense catalogue in March of this year (2011) at London’s Hammersmith Apollo Theatre, a blend of early solo career tracks, his big radio hits, and numbers from his Scratch album, including a cover of Paul Simon’s “The Boy in the Bubble.” It’s not your typical Gabriel show, but definitely worth checking out for any Gabriel fan and true music lovers.

The screen captures in this review are all taken from the 1080p 2D program.

While both high definition productions are among the best I have seen up to this point for a live concert performance, apart from some unavoidable low-light photography video noise that is apparent, I would have to say that the 1080p 2D program looks a bit sharper and slightly more detailed, but it does suffer from some more apparent motion judder.

Now, on to the 3D. This show was originally captured in 3D, there’s no conversion here, but there aren’t too many moments of gimmickry tacking place. It’s meant to give a “you are there” sort of perspective, and for the most part is rather successful. Ghosting is minimal and the sense of depth is rather strong. There are, however, a few special effects that are used sparingly to give just a a little bit of “pop out” especially during the performance of “Signal to Noise,” and they work quite well, but if this were done straight through the show, I’d see how it could become very distracting.

Eagle Rock has provided the audio in their usual lineup of lossless DTS-HD Master Audio 5.1, LPCM 2.0 Stereo (48kHz/16-bit) and Dolby Digital 5.1 mixes. As far as pop concert discs go, this is one of the best 5.1audio mixes I’ve yet heard, referring to the lossless encodement; it is clean and dynamic with a great sense of space and ambience. Yet, I do have to take exception with the overall sound of the orchestra here. Being a great lover of

classic music and classical recordings, I’d have to say that the orchestra sounds very cluttered, the strings too unnatural and metallic, and too close-miked. Of course, It’s probably to be expected given it is ultimately a “pop” concert and crowd noise and things must be compensated for. The mix remains from an audience perspective until “Digging in the Dirt” when the opening finds the sound of a metronome panned around the room, but that is the only time it becomes more discrete.

Stereo lovers will find the LPCM 2.0 mix is also quite respectable, with a wide stereo pan, very good dynamics and decent separation of sounds.

This package is heavy on discs, but light on extra on-disc materials, supplying only a brief, under twenty-minute behind-the-scenes featurette with Gabriel, members of the New Blood Orchestra and the 3D production crew discussing this project.


Gabriel’s New Blood London show may not be for any and everyone, but I fail to see how anyone who doesn’t really love music couldn’t enjoy this show. It shows the strength of Gabriel as a songwriter that his songs translate so well to this orchestral mode. Not every track here works as well as the next, but mostly, this is a high quality reinterpretation of his classics. Recommended.