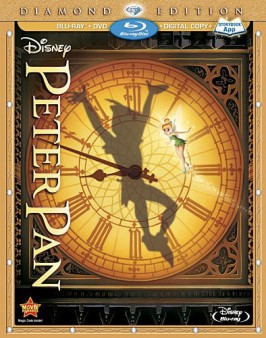 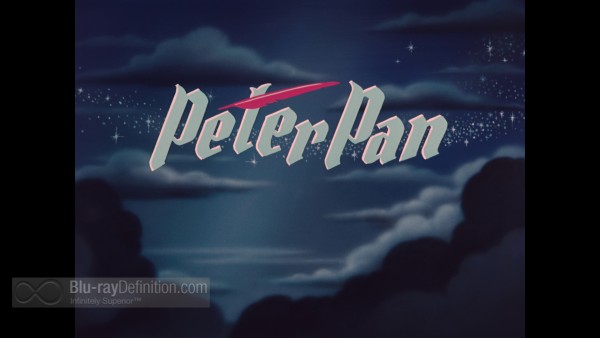 When I was a kid, Peter Pan was the big star of Never Land, but somewhere along the way Disney in their infinite wisdom found themselves a way to eek out more money from the princess-loving little girls in the world by launching their Fairy line and revamping Tinker Bell into a friendly, golden-haired cash machine. With that out of the way, it’s fantastic to see this original Disney classic finally make its way to Blu-ray with everything in its right place again. Tinker Bell is a mischievous fairy prone to jealousy, Peter is boy who refuses to grow up, and Never Land is a topsy turvy place filled with adventure and excitement.

Walt Disney’s adaptation of Scottish novelist and playwright J. M. Barrie’s Peter Pan first appeared in 1953, the fourteenth such feature by Disney & co. It focuses mainly on the adventures of Peter Pan (voiced by Bobby Driscoll), a boy who never ages, and Wendy Darling (voiced by Kathryn Beaumont), a girl taken by the adventures of the boy pirate Peter Pan. When Peter whisks Wendy and her two brothers away to Never Land where his troupe of adventure-seeking “Lost Boys” are, they meet with trouble as Wendy and her brothers are caught in an ongoing battle between Peter and the nefarious Captain Hook (voiced by Hans Conried). Finally, Hook uses the jealousy of Peter’s tiny fairy companion Tinker Bell over the relationship between Peter and Wendy to try and get at Peter once and for all.

As a film, Peter Pan is  an action-fantasy-musical that wastes no time getting right into the mix of things. From the opening scene we are thrust into the world of Peter Pan as he comes to the children’s nursery in search of his shadow. From there the film quickly whisks us into the magical world of Never Land for one fantastical adventure after the next, from indians to pirates. Being that this is the final film from Disney to be directed by the original lineup of the “Nine Old Men,” as Walt referred to them, it seems rather fitting that there would be no punches pulled with the storyline or the animation. Pan never drags, it never falters, and it hooks you with numerous catchy tunes, like “Following the Leader,” “You Can Fly!,” and “A Pirate’s Life.” 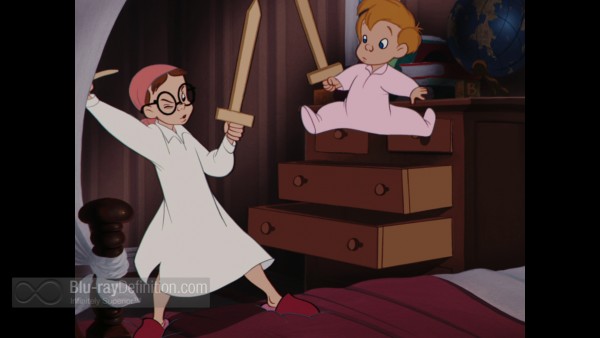 Peter Pan comes to Blu-ray in what is marked by Disney on the packaging as a “1.33:1” AVC/MPEG-4 1080p/24 encodement. Colors look vivid and, as seems to be the trend at Disney with their animated classics, the image is pristine – almost to a fault here. One can’t help but look at Peter Pan and think that it has been sapped of its texture and possibly some finer details along the way (see my updated review of Cinderella: Diamond Edition). Having lost access to my older VHS and DVD copies of these classics a while back when I passed them down, I can only go by memory now, but looking at the image, it looks like it will very much appeal to a broad base, but hardcore enthusiasts mught surely find something to nitpick in the lack of perceived textural dimensionality. 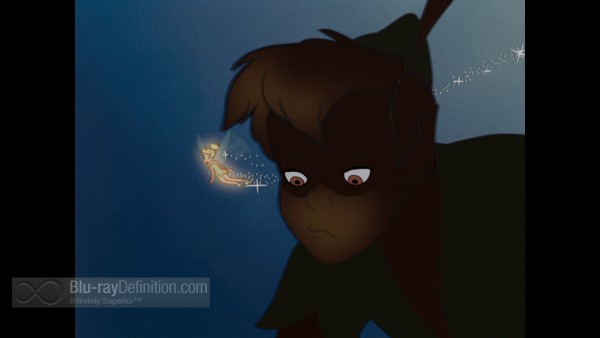 A brand new 7.1 mix in DTS-HD Master Audio (48kHz/24-bit) accompanies the original theatrical mix in Dolby Digital 1.0 on the Blu-ray as well as French and Spanish Dolby Digital 5.1 mixes. The 7.1 is quite spacious, bumping up the ambience and spreading sounds around the front and sides rather well. It’s nicely balanced, even if the dialogue is somewhat lower and the overall tonality a bit duller in comparison to the monaural mix. 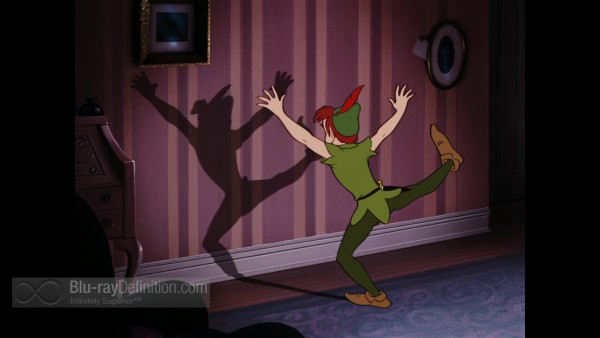 Extras are extensive and they include a port-over of the original DVD supplements plus a few new additions. Freshly added are Disney’s now familiar DisneyView sidebar artwork, Disney Intermission feature, and the Storybook App (available in the iTunes App Store) that offers an interactive viewing experience during playback. 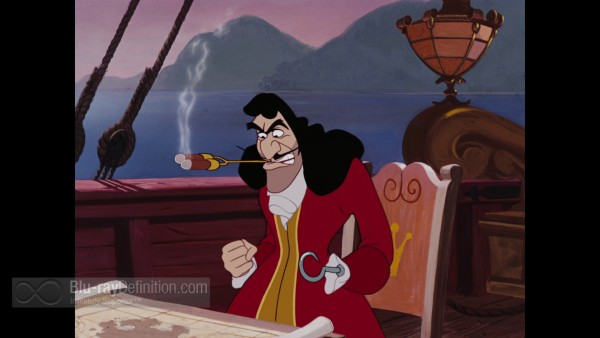 This is one of the enduring classics from the Walt Disney canon of animated classics. A true adventure that families can treasure and enjoy. There are a couple of caveats of note, however. One must go into this remembering that this is a film from 1953 and as such the social mores were different. Captain Hook’s sidekick Mr. Smee, for instance, spends the entire film intoxicated on spirits. Most offensive by today’s standards will definitely be the film’s stereotypical portrayal of the Native American “indians.” With that being said, the other, less objectionable elements of Peter Pan (by today’s standards) are universally timeless, beautiful to watch, and the film flits by. 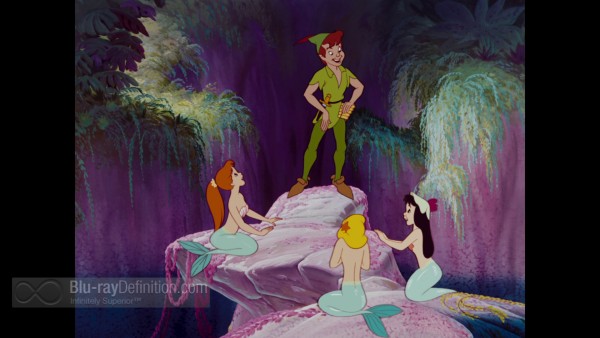 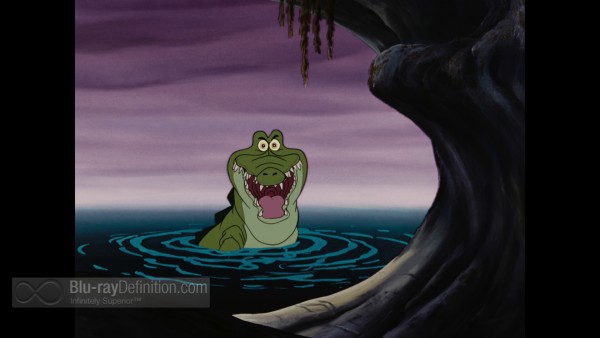 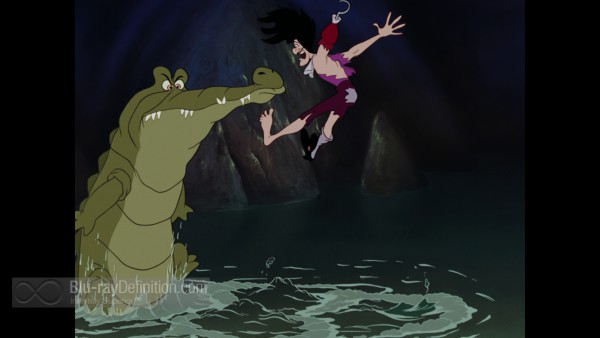 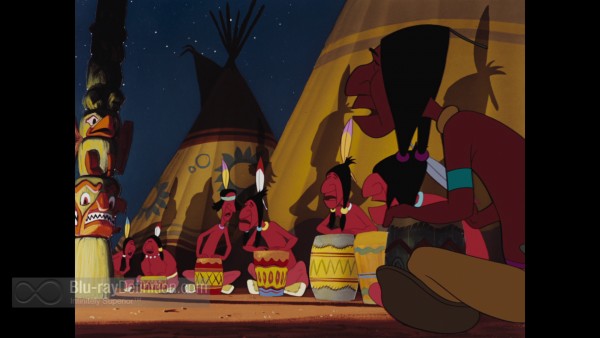 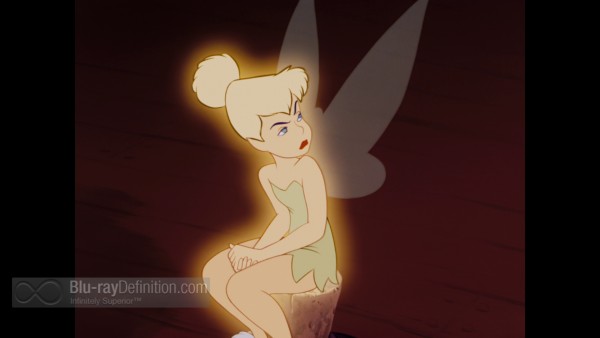 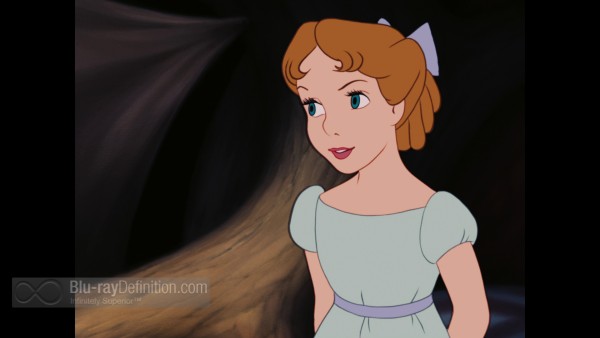