Tapping indie director David Lowery (Ain’t Them Bodies Saints), Disney once again returns to one of its old properties to do a modernized, live-action, CGI-laden update. This time it’s of the somewhat lesser quality Pete’s Dragon, which hails from Disney’s tumultuous late-‘70s era. Pete’s Dragon was a hybrid live-action/animated musical in the vein of Mary Poppins that featured an animated dragon, but it didn’t reach the quality of its counterparts despite being somewhat successful at the time.

Lowery’s Pete’s Dragon does temper the original film’s hammy acting and cheese factor, and retells the story of the five-year-old orphan boy Pete (Oakes Fegley) who now, rather than running away from an orphanage, loses his parents in a tragic car accident from which he is the sole survivor. Pete wanders off from the accident into the woods where he meets the lonely dragon he names Elliot and the two become best friends. Six years later, Pete is discovered when his curiosity over a girl, Natalie (Oona Laurence), gets the best of him and she spots him in the trees. Natalie’s mom, park ranger Grace Meacham (Bryce Dallas Howard) brings Pete back to civilization and no one believes Pete that his friend Elliot, who helped him survive for so long in the woods is the dragon of local legend, until Natalie’s soon-to-be brother-in-law captures the friendly Elliot, kicking off a series of hair-raising escapades that put Elliot’s and the townsfolk’s lives in jeopardy.

Lowery’s film sort saps the fun out of Pete’s Dragon, completely. Unlike the live-action version of The Jungle Book, which maintained a sense of wonderment, this Pete’s Dragon feels so downbeat from the opening tragedy to the impending sense dread over something bad happening to Pete and his friendly dragon. Despite the best efforts to make the film warm and literally fuzzy with Elliot’s green coat of fur, it doesn’t feel like a happy film. That said, there is at least a strong message about creating family where you can, even in unexpected places. Pete loses his family, but finds a new one with Grace, her fiancée, and his daughter Natalie.

Certainly the visual effects in the film are fantastic. There are no comparisons to be made between this 2016 Elliot and the animated version from 1977, which was quaint, but hardly as realistic and as well-integrated into the live-action as this one. That’s to be expected, however, given how much time has passed and how far the technologies have advanced. 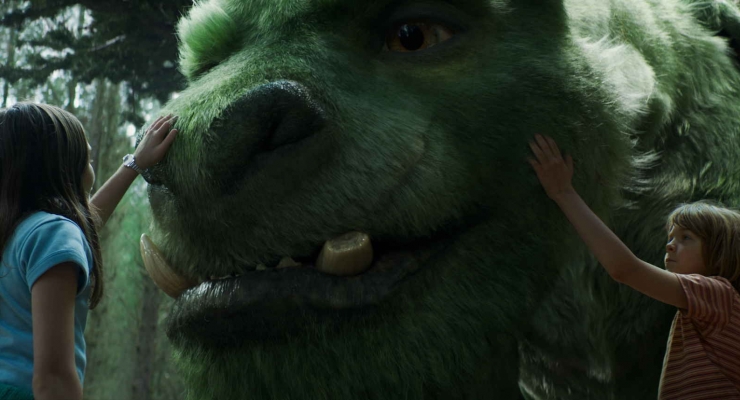 Pete’s Dragon was shot at 3.4K resolution on the Arri Alexa XT Studio and utilized a 2K digital intermediate. It arrives on Blu-ray in a 2.39:1 framed AVC 1080p encodement that is as clean and crisp as one would expect a contemporary digital production to look. While I notice a slight hint of softness, most likely from the shooting techniques and lenses, the overall image is free from any compression noise, posterization or harmful video noise. The colors look strong, such as when the dragon shifts shades to a bright, almost neon green; it really pops nicely. The nuance in darker scenes is good, and this can be seen in the shadowy forest where one can make out the leaves on trees in the shaded backgrounds quite well.

An excellently balanced DTS-HD Master Audio 7.1 audio mix is included on the Blu-ray Disc of Pete’s Dragon. It has an abundance of atmospheric effects that surround you in the woods where Pete and Elliot the Dragon live, plus the low end really kicks in to support the solid footsteps of the dragon, his roar, and other louder effects like crashes and trees falling over. Dialogue is clear and full, and sounds are placed around the room nicely.

Pete’s Dragon is a mildly entertaining family film that is no more a classic than the original, in all honesty. At least the 1977 version has nostalgia and the musical factor going for it. This one seems a bit boring at times and too serious. Some younger kids will probably lose interest and adults who remember the original will likely want to stick with that one.