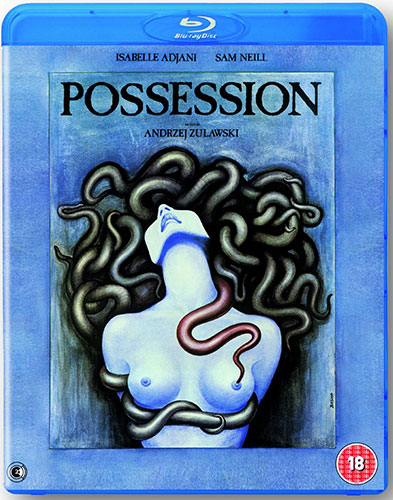 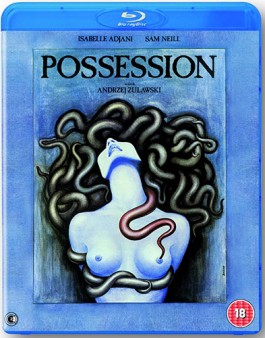 Expatriate Polish filmmaker Andrzej Korzynski had to leave his native country after one too many conflicts with its cultural ministry in order to create Possession, his most successful international film to date. A bleak, surrealist look at the horrors of a relationship gone bad and the ill-feelings that can literally manifest themselves with an infamous final act containing what the Japanese might call “hokushu goukan” or tentacle rape scene, the film is dour, shocking, and post-modernist in every sense. Filmed in the stark, rundown landscape of West Berlin, Korzynski casts Isabelle Adjani as a woman who leaves her husband (Sam Neil) for a strange, mystery lover. At first, her husband, Mark, is obsessed with keeping his wife, Anna, with him, and believes her to simply be having some sort of psychotic break. During one of her visits to their flat to see the couple’s young son,the situation escalates into violence. Mark is also drawn to his son’s schoolteacher, a doppelgänger for Anna (played by Adjani as well), with lighter-colored hair, but this is not enough to quell his obsession with his wife. Having Anna followed by a private investigator, he will finally learn the stunning truth. His wife is luring men to her new flat, flaying them, and feeding them to some strange, tentacled creature that she is having sexual relations with.

Possession was banned in the UK for decades and an edit that gutted 45-minutes from the film was released to US audiences. This US edit is an atrocity that turned Korzynski’s post-modernist surrealist drama into a creature-feature that could barely be followed.

Finally restored to its original length here, Possession is horrific, but is hardly a horror film in its truest sense. Between the cold and dilapidated West German architecture, the evocative poly-stylist, electronic score of composer Andrzej Korzynski, and the fantastically unhinged performance given by Adjani, Possession exposes, for most of its length, some the scariest things of all, human emotions.

Possession comes to Blu-ray in its original 1.66:1 aspect ratio with a fine 1080p AVC encodement. The palette of the film tends toward the cooler side of the spectrum and is a bit desaturated so nothing really pops here, but it looks film-like and is relatively clean. Some instances lean toward the edge of noisiness due more to the production and film stock more than this transfer. Crisp textures, strong detail and good contrast abound however, in this Blu-ray that is ultimately pleasing to the eye.

The monaural soundtrack, offered in LPCM 1.0 (48kHz/24-bit), is a little bit thin, but it is clean very little hiss or crackle, offers clear dialogue, a natural sense of ambience, and strongly presents the modernist score from composer Andrzej Korzynski.

We get a really strong collection of extras here with lots of interviews and documentaries.

Horror, drama, whatever you want to call it, Possession is a marvelous, shocking, and brilliantly acted film. Kudos to Second Sight for bringing the original “director’s cut” to Blu-ray in a wonderfully transferred HD presentation.