With its beautiful and signature animation style, a riveting blend of action, adventure, fantasy, and young romance, Princess Mononoke has broad appeal and is one of the most beloved films from the powerhouse Japanese animation studio Studio Ghibli. 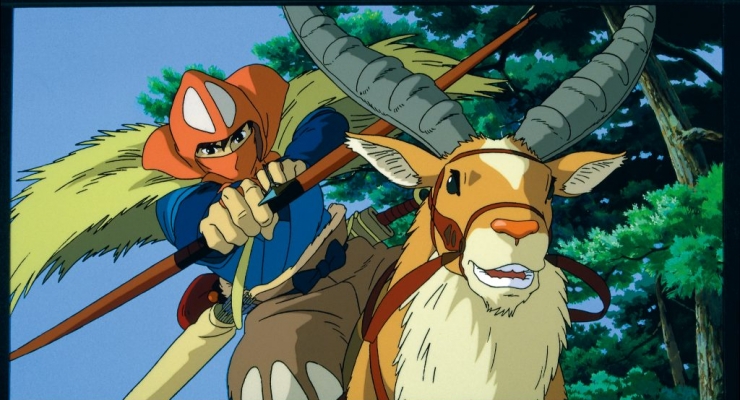 Princess Mononoke arrives in this Blu-ray release in an AVC 1080p encodement framed at 1.85:1. This is the same transfer from the previous Shout! Factory/GKIDS release which looks magnificent. The color and detail in this presentation is beautiful, with a natural, organic layer of film grain still present, while the picture is clean and free from source damage.

Princess Mononoke has always sounded excellent on Blu-ray and that continues with this Collector’s Edition from Shout! Factory/GKIDS. The original Japanese-language track and the star-studded English dub translated by Neil Gaiman are both included in DTS-HD Master Audio 5.1. They are both lush with atmospherics, have good amounts of solid sound effects mixed through the surround channels, the low-end, while it does not blow up the china cabinet, is meaty and full, and dialogue is clean.

This Collector’s Edition of Princess Mononoke is packed with cool on-disc special features and collector’s items, like a 40-page book and CD soundtrack. It’s all housed in a gorgeous hard slipcover.

Princess Mononoke is a beautiful film to watch and skips by in a blink of an eye given its quick pace and captivating characters. It is dense with intricate artwork, complex characters, and a colorful visual palette. This new release isn’t a new restoration over the previous issue from Shout! Factory/GKIDS, but it is a wonderful edition for collectors and looks and sounds amazeballs!

Princess Mononoke Collector’s Edition is out May 14, 2019 from Shout! Factory/GKIDS

4.5 / 5 TheaterByte Rating
{{ reviewsOverall }} / 5 User Rating (0 votes)
Studio GhibliAnimation Studio
Shout! Factory | GKIDSDistributor
Miyazaki HayaoDirector
Miyazaki Hayao | Neil Gaiman (adapted by: English version) 3Writer
130 Mins.Run Time
14 May 2019Release Date
$49.97MSRP
1.85:1Aspect Ratio
AVC 1080pVideo
Japanese DTS-HD MA 5.1Audio
English DTS-HD MA 5.1Secondary Audio
English SDH | English for Original Language Version | FrenchSubtitles
PG-13 (for images of violence and gore)Rating Certificate
The Story
The Animation
The Video
The Audio
The Dub
The Supplements
Summary
While on a journey to find a cure for a curse from a demon, Ashitaka becomes embroiled in a battle between forest gods and Lady Eboshi, the ruler of a powerful mining colony, who wants to kill them all and control the forests for herself. Miyazaki Hayao's 1997 classic anime feature film is lush with detailed artwork, complex characters, and masterful sound design. The collector's edition is housed in a beautiful hardcover slipcase, comes with a 40-page book with essays and artwork, and a CD of the soundtrack.
What people say... Login to rate
Order by: