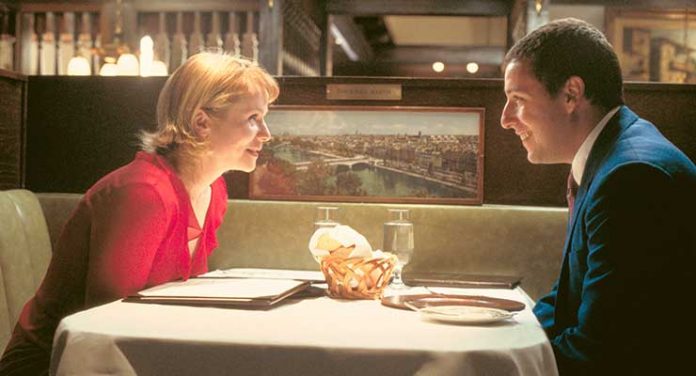 Coming after his commercial and critical breakthrough Boogie Nights and the commercial failure but critical success of Magnolia, Paul Thomas Anderson threw viewers a curve ball with the strange romantic comedy Punch-Drunk Love.

The highly peculiar film starred comedian Adam Sandler in an eccentric dramatic role as sad and lonely, hotel supply business owner Barry Egan whose seven sisters have worn him down so much with their teasing that he has a lot of repressed anger and rage that occasionally manifests itself as violent outburst. Early on Punch-Drunk Love, Barry dials in to a phone sex line, which results in his credit card information being stolen and a slime ball named Dean Trumball (Anderson regular, the late Philip Seymour Hoffman) extorting him for money and sending a group of thugs after him. This all happens just as Barry begins dating and falling in love with Lena Leonard (Emily Watson), a co-worker of one of Barry’s seven sisters.

Anderson’s film is a tightly woven fiction that balances his good ear for music (Jon Brion scores the film with his equally eccentric percussive, and sweeping orchestral sounds) and keen eye for visuals. Where his previous three films all dealt with people struggling to build familial relationships, this one focused on the desperation of, once again, the lonely struggling to find romantic relationships and cling to them as tightly as possible. Sandler gives a surprisingly reserved performance, his usual comedic quirks here coming across as sad, layered, and sympathetic, no doubt thanks to Anderson’s direction and the softening of Emily Watson’s co-lead. Watson plays off of Sandler perfectly and is a true charmer as his romantic redemption in this topsy-turvy world Anderson sculpts, interspersed with surreal digital art from Jeremy Blake and an almost eerie sounding Shelly Duvall crooning “He Needs Me” from Anderson mentor Robert Altman’s 1980 live-action Popeye. 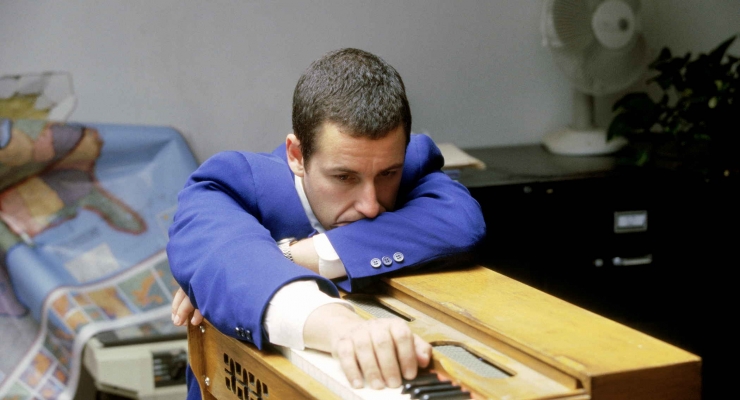 Punch-Drunk Love is a new digital transfer from a 35mm interpositive supervised by director Paul Thomas Anderson. It looks exceptionally crisp with a superb layer of grain and excellent color saturation. The blue of Sandler’s suit really radiates, as does Emily Watson’s red sweater top. The scenes set outdoors in Hawaii have nice warmth to them, setting them apart from the rest of the film’s cool palette. Criterion Collection provides the transfer in an AVC 1080p encodement in its original 2.39:1 framing.

The original 5.1 soundtrack was remastered from a 35mm magnetic track. It’s supplied in a DTS-HD Master Audio track that is clean and full. Jon Brion’s score has punchy low- and mid-range. The surround channels, though used sparingly, do bring good balance into the mix and there is one scene where sound effects are spun around the room in a dizzying fashion, but it fits in with the storytelling and visuals.

We get a signature array of extras from the Criterion Collection offered up on this release. It combines both old and new supplemental materials. I found the most interesting piece to be the featurette with composer Jon Brion.

Punch-Drunk Love has a decidedly European feel in its flow and free use of art and music to help tell its story. It almost reminds me in a way of Amelie in some respects, only less lighthearted. Anderson won the 2002 Best Director prize at the Cannes Film Festival for Punch-Drunk Love.