Director Sheng Ding’s (Police Story: Lockdown) Railroad Tigers has been heralded by many as its star Jackie Chan’s return to his Hong Kong action comedy glory days. While the film is certainly chockfull of action and comedy, its grittiness and sometimes-confused storyline keep it from ever competing with Chan’s past efforts.

The story revolves around a group of railroad workers led by Ma Yuan (Chan) in Japanese-occupied China during World War II who spend much of their time high jacking wealthy Japanese patrons riding on railroad cars. When Wa Yuan and his partners have to rescue an injured Chinese soldier and hide him away from the Japanese, they inadvertently get drawn into a plan to blow up a bridge that the occupying force needs to get their supplies. Ma Yuan decides to take over from the injured soldier, stop a crucial, heavily stocked supply train coming in, and then blow up the bridge. Ma Yuan and his partners – among them his daughter – find themselves fighting the Japanese military in a high stakes battle for freedom that just may cost them their lives.

Railroad Tigers is a fast-paced film with some glorious action set pieces, each one grander than the next. While it does become increasingly difficult to accept that the aged Chan can pull off some of these feats, such has running atop a speeding train or hanging from beneath one, it doesn’t diminish how breathtaking the sequences are. And they are all pulled off with a lot of humor and heart. The humor is often undermined by some visceral violence and unbelievable plot twists that not only make the script a little difficult to follow, but also make Railroad Tigers drag on far longer than it needs to. Nowhere is this more evident than in the film’s grand finale with the train on the bridge and the very unlikely showdown between opposing forces. 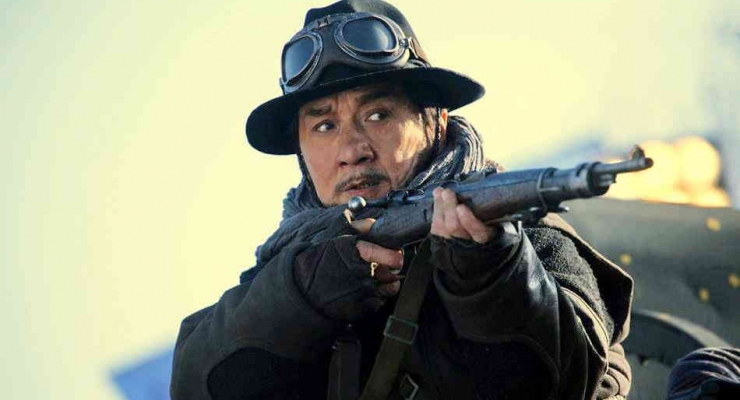 Railroad Tigers was shot in Dolby Vision for the cinema, but although Well Go USA has embraced the latest immersive audio formats on some of their releases for the home (see below) with DTS:X, they have yet to jump into Ultra HD, so we don’t get to see this film in all of its Dolby Vision high dynamic range glory. We get only this still quite solid Blu-ray transfer encoded in AVC 1080p. The image is crisp and mostly clean with only a few hints of some banding creeping in, in some of the shots of the skies and other flat-colored backgrounds here and there. Apart from that, colors are natural, shadows look great without any crush and there is a strong depth of field.

The strongest part of this release’s technical aspects is the Mandarin DTS:X mix that announces its presence immediately with the energetic techno score that fills all the channels. Throughout the film we get sounds through the room and up in the “X” channels, the rumble of a railroad train passing overhead with deep extension in the low-end to underpin it, gunshots, explosions, and lots of wide movement of dialogue. The score continues to balance in providing a lot of energy and dialogue is clear and full above all the effects.

This collection of special features is ho-hum. They are mostly very promotional-feeling, brief featurettes. The 21-minute Making Of is the strongest feature. All of featurettes include interview snippets with the cast and crew and some behind-the-scenes footage.

Railroad Tigers is a flawed action film; so if you’re expecting Jackie Chan of old, forget it. Still, if you want a good popcorn film with exhilarating action sequences and a sense of humor and don’t mind some violence that can sometimes be a little overt the top, then this one’s for you.