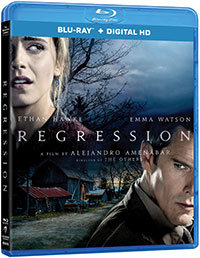 Set in 1990, Regression follows small town Minnesota detective Bruce Kenner (Ethan Hawke) who is tasked with investigating the terrifying claims of young woman Angela Gray (Emma Watson) who says she was sexually assaulted by a satanic cult that has infiltrated the town, among them her own father and grandmother. Her story is a horrifying one, but things begin to get muddled when Kenner starts to worry that Angela’s memories of the events may have been implanted by psychoanalyst Kenneth Raines’ (David Thewlis) regression therapy.

Supposedly inspired by true events, Regression is a hodgepodge of styles and

genres set at the height of 1980s satanic and evangelical hysteria all culminating in the modern-day witch hunts based around the now vastly discredited area of hypnotherapy known as regression therapy. While Amenábar sets a terrific mood with all of this material, his vision is not very clear. We are never certain if this array of stylistic choices is meant to be taken literally as one detective’s decent into the darkness from getting too close to a horrific case, or if he means the film to tilt into the supernatural, not unlike The Others (a film Amenábar completely stole uncredited from another film, The Innocents).

There’s a little bit of an issue with style trumping substance in Regression, particularly when it comes to the far too hurried third act of the film. That said, the style is superb here. Shadowy houses, creaking floorboards, surreal nightmares of black masses. And anchoring that all are two fine performances from the leads. Ethan Hawke is excellent as the detective who goes all in on his victim’s story and starts seeing devil worshipers everywhere he looks, while Emma Watson really comes into her own as an adult actress, both sympathetic, seductive, and unexpectedly manipulative; she steals the film with her performance.

Regression was shot in HD in the anamorphic, 2.39:1 format on the Arri Alexa XT and brought to Blu-ray in a beautiful AVC 1080p encodement from Anchor Bay. The film itself has a desaturated, almost monochromatic palette that stays in the cool blue and grey range, so it doesn’t leap from the screen. That said, it certainly sets the gloomy atmospheric mood that Amenábar was going for and it looks clean and very detailed on this release, with excellent contrast and strong depth of field.

Regression ran in theaters with an Atmos mix (assuming your local theater was equipped for it), but on this

release it only gets an English DTS-HD Master Audio 5.1 mix. I say “only,” but the reality is that this 5.1 mix is excellent and the additional Atmos channels are hardly missed. The balance of sounds, the atmospherics, and the dialogue are all superlative. This is A+ mixing and sound engineering.

The extras are disappointing, to say the least. Everything here is simply promotional in nature, some brief EPK-style features with the cast and crew waxing poetic on how wonderful the film is, basically.

Regression is an imperfect thriller from director Alejandro Amenábar that is dripping in atmosphere and has outstanding performances from actors Ethan Hawke and Emma Watson. The Blu-ray from Anchor Bay is also reference quality, but lacks any compelling bonus materials.