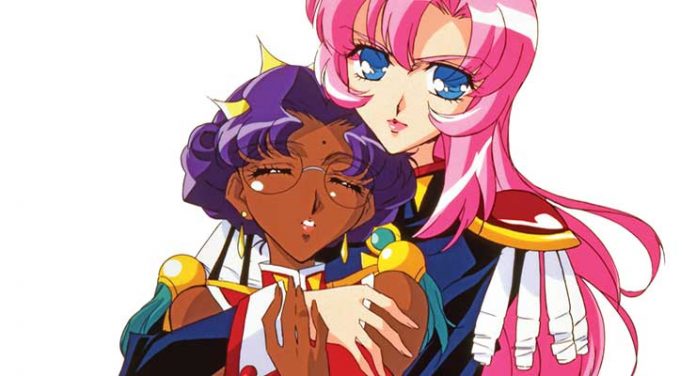 The classic shojo series Revolutionary Girl Utena has a strange premise from the start. The story revolves around titular character Utena Tenjou, a sort of tomboyish teenage girl who, as a younger girl, was so impressed with a prince that she decided to become one herself. When she goes to attend Ohtori Academy, she meets fellow student Anthy Himemiya, who is in an abusive relationship. Utena then fights to free Anthy from this abusive relationship and is then drawn into a series of duel with the members of the student council of Ohtori Academy, the winner of each duel being awarded Anthy as their prize. Anthy, who is referred to as the “Rose Bride,” is said to have special powers that will help the person who possesses her revolutionize the world.

A mixture of high school romance, comedy, yuri, with harem elements and a bit of fantasy thrown into the mix, this series is deceptively simple and familiar at first, but in fact it is far more complex than it seems. Beyond the typical shojo series or even maho shojo, which this one hints at, Revolutionary Girl Utena seems to play with the archetypes of fairytales and the stereotypes of gender roles in a subtle, almost subversive way. The “Prince Charming” becomes a the teenage girl, the “Evil Queen, becomes the male prince. And all of this is as the main character’s journey of self-discovery, self-identity, and discovery of the greater mystery into the “revolution” unfolds.

The animation style is quite gorgeous for its era as well, given it was done on film. There is an organic feel that has been lost over the years as anime – and animation at large, really – has shifted further into the digital realm. In this series, the artwork, as beautiful and artistic as it is, it still feels connected to those drawing it, like real pieces of art. 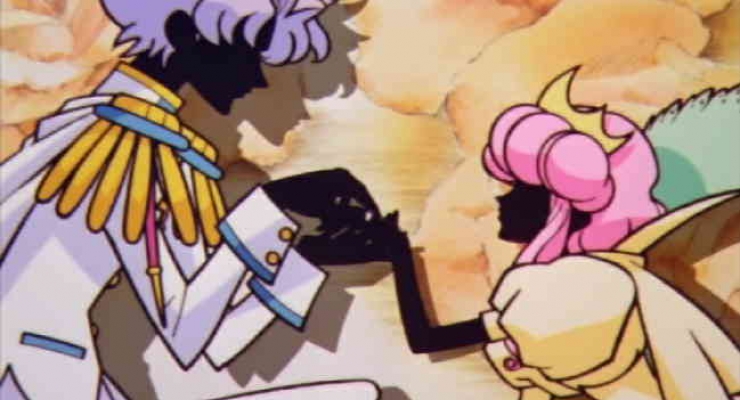 Revolutionary Girl Utena was done originally on 16mm film and comes to Blu-ray in an AVC 1080p encodement from Nozomi Entertainment. Given its age and original source, this is a fine transfer that is relatively crisp and free of major source damage. The 16mm source retains a remarkable amount of detail and color vibrancy. I see some very slight aliasing around the line art, but it doesn’t take away from the overall strength of the transfer.

Revolutionary Girl Utena comes with the original Japanese audio track in LPCM 2.0 stereo and a LPCM 5.1 remix as well as an English dub in LPCM 2.0 stereo. The LPCM 5.1 mix is competent if underwhelming. We get mostly some atmospherics in the surround channels with the odd discrete sound effects, but a good stereo field and clean dialogue. The LPCM 2.0 Japanese track is fine as well. The really stinker here is the English dub, which from a mix standpoint has dialogue that sounds oddly sanitized and out-of-place, as well as containing performances that may as well be a middle school drama club doing a read through of the scripts given how much lack of charisma there is in these performances. On top of that, there are spots with whole chunks of dialogue missing from the English dub that appear in the Japanese version. For instance, in episode 9, “The Castle Said to Hold Eternity,” at the beginning of the dual, one the Japanese track you can hear things like “Take him down in one strike, Touga!” or “Saoinji, you’re the best!” being shouted, because in the English dub there’s just a long stretch of odd silence.

Nozomi Entertainment only includes typical special features such as TV spots here, and not even any for this new set. It’s all older TV spots for the old DVD and CD release. One cool inclusion is the music video, but, again, it is obviously an older, ‘archival’ extra.

This first set of Revolutionary Girl Utena, The Student Council Saga covers episodes 1-12 and gets the series off to a magnificent start with an engaging story, beautiful animation, and excellent transfer of the video.

Revolutionary Girl Utena: The Student Council Saga is out now on Blu-ray from Nozomi Entertainment

3.3 / 5 TheaterByte Rating
{{ reviewsOverall }} / 5 User Rating (0 votes)
TV-14TV Rating
J.C.StaffAnimation Studio
RightStuf Inc. | Nozomi EntertainmentDistributor
Ikuhara KunihikoDirector
Enokido YōjiWriter
300 MIns.Run Time
3 Oct. 2017Release Date
$49.99MSRP
1.33:1Aspect Ratio
AVC 1080pVideo
Japanese LPCM 5.1Audio
Japanese LPCM 2.0 Stereo | English LPCM 2.0 StereoSecondary Audio
EnglishSubtitles
The Story
The Animation
The Video
The Audio
The Dub
The Supplements
Summary
A teenage girl who wants to be a prince must fight a series of duels against her student council to win a fellow student known as the "Rose Bride" who will grant the person who posses her the power to revolutionize the world in this complex, multilayered anime series from the 1990s, out in a newly remastered Blu-ray edition from Nozomi Entertainment.
What people say... Login to rate
Order by: