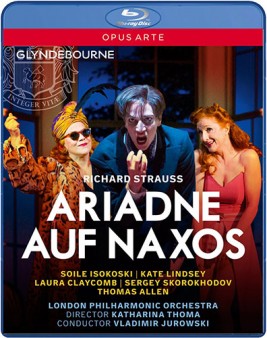 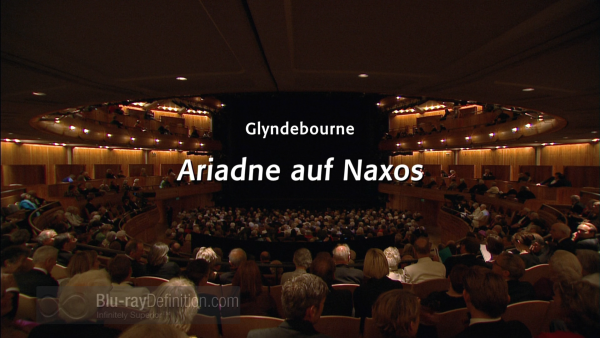 Maestro Vladimir Jurowski closed out his career as Music Director of the Glyndebourne Festival with this June 2013 production of Richard Strauss’s Ariadne auf Naxos. Strauss has used the operatic stage to comment on the relationship of art to life as in Capriccio and in the case of the present work, the relationship of life to art. 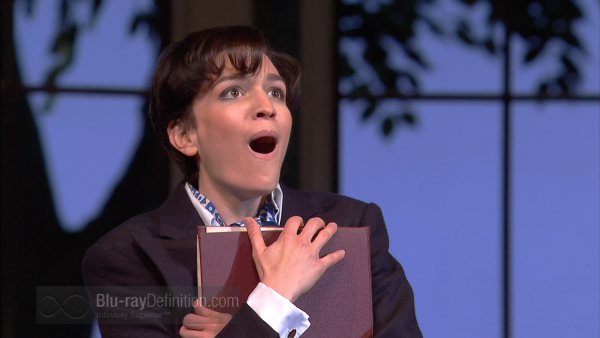 During the prologue, we find that the opera “Ariadne auf Naxos” is to be performed in the country home of a wealthy arts patron who has also commissioned a comedy and fireworks show to follow. The Composer (Kate Lindsey) is beside himself with this development and is even more frustrated by the inability to rehearse his opera.  The various principals for the opera and the comedy begin to arrive: the Music Master (Thomas Allen), Zerbinetta (Laura Claycomb), the Prima Donna/Ariadne (Soile Isokoski), the Tenor/Bacchus (Sergey Skhokhodov), and the four Comedians (Torben Jurgens, Andrew Stenson, Dmitri Vargin, and James Kryshak). The Major-Domo (William Relton) informs all concerned that, in the interest of time both the opera and comedy will go on stage together. 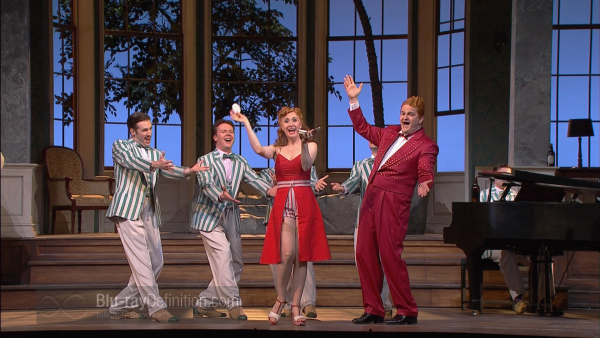 The opera/comedy begins with Ariadne abandoned on the island of Naxos and consoled by the nymphs Naiad (Ana Maria Rabin), Dryad (Adriana di Paolo) and Echo (Gabriela Istoc). The comedy troupe arrives only to taunt poor Ariadne. But, in true deus ex machine style, the god Bacchus appears and wins over Ariadne in the finale. 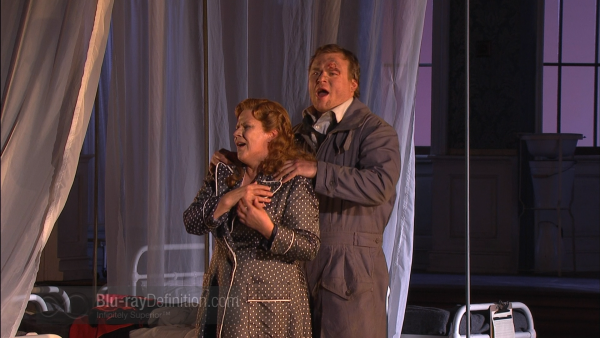 This production, conceived by director Katharina Thoma, is updated to WWII England, complete with droopy potted palms. However, Thoma’s conception goes a bit too far with the fireworks becoming a Luftwaffe bombing raid and Ariadne’s island turned into a hospital ward with Bacchus morphing into an injured RAF pilot while the nymphs are now nurses.  The point of having the Composer loiter around in the opera’s second half with absolutely no lines to be sung was also lost on me. 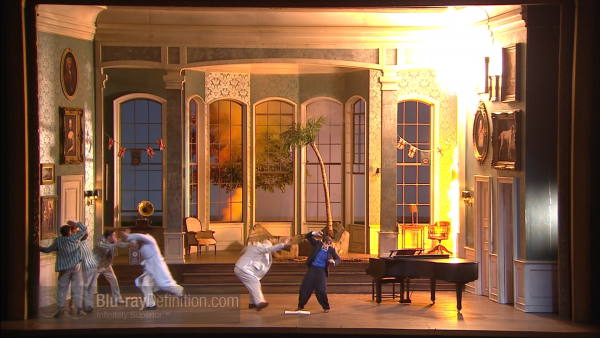 Vocally, this performance has some considerable strengths in Lindsey’s manic portrayal of the Composer, Claycomb’s spectacular delivery of Zerbinetta’s showstopper aria (while being strapped into a straightjacket), and good contributions from the supporting cast of comedians and nymphs. Sir Thomas Allen, pushing 70 at the time of this performance, is most respectable Music Master and Skhokhodov’s Bacchus is bright and heroic. The major disappointment is the Isokoski’s impersonation of the opera’s diva (an off-night perchance?) Conductor Jurowski has a great feel for Strauss’s score and extracts all of its glory from his London Philharmonic Orchestra players. 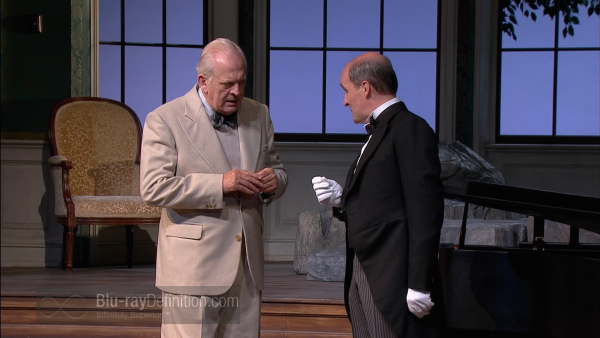 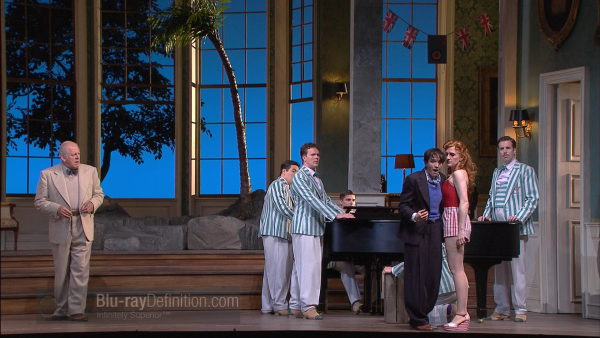 The Glyndebourne venue is smallish with great acoustics so everything on stage and in the pit comes across quite clearly. The chamber music nature of the score is well realized with nice balance between the voices and the thirty-seven players. The novelty here is having the piano on the stage rather than in the pit.  The DTS-HD Master Audio 5.1 soundtrack is airy with modest surround channel effects. The stereo version is also quite good if not as atmospheric. 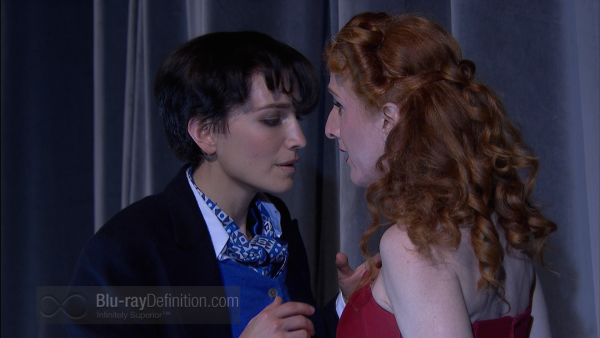 We get three nice featurettes:

A program booklet contains cast listings and credits as well as a transcript of a conversation between Glyndebourne dramaturg Cori Ellison and director Katharina Thoma. A cast gallery is also included. 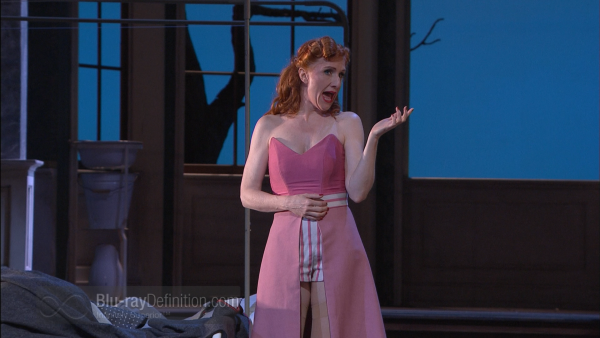 In contrast with the Baden-Baden Festival Blu-ray starring Renee Fleming and reviewed last year, that one was a bright and colorful production, while this one, particularly in the opera/comedy section, is almost drab. The dramaturgical concepts yield a lot of extraneous stage business that frankly did not work for me. While the production has a number of strong points as previously noted, it does not displace its predecessor on my Ariadne Blu-ray rank list. 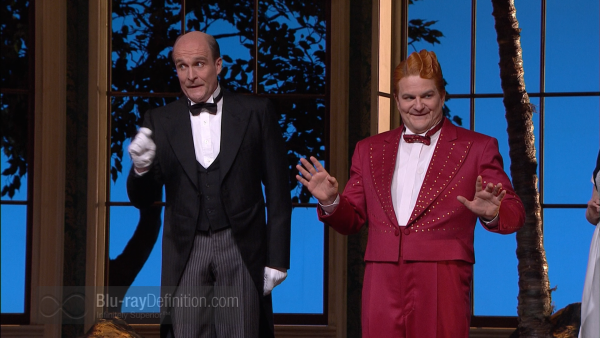 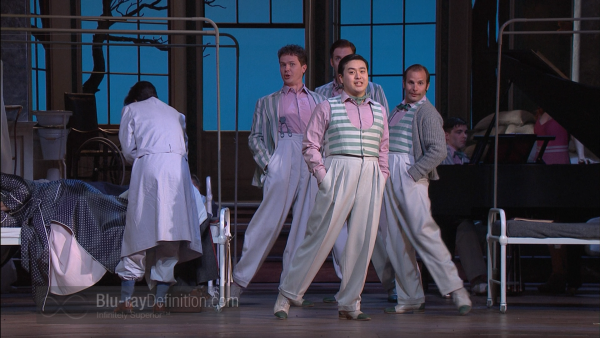 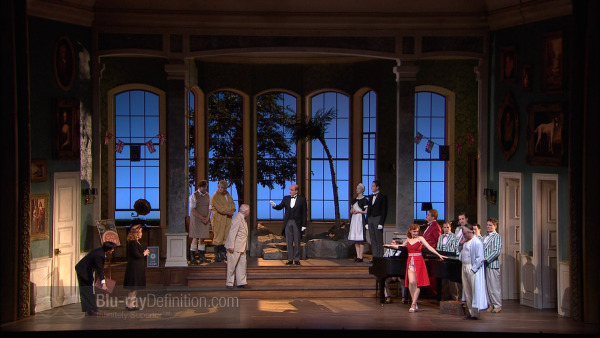 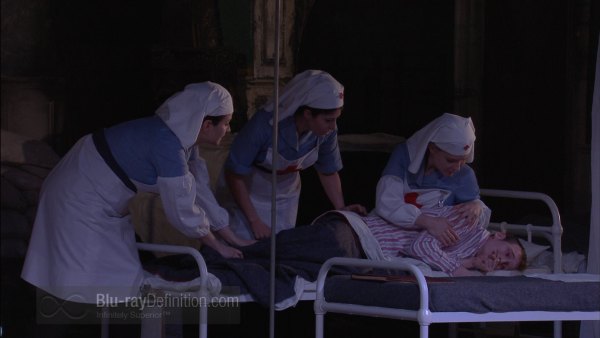 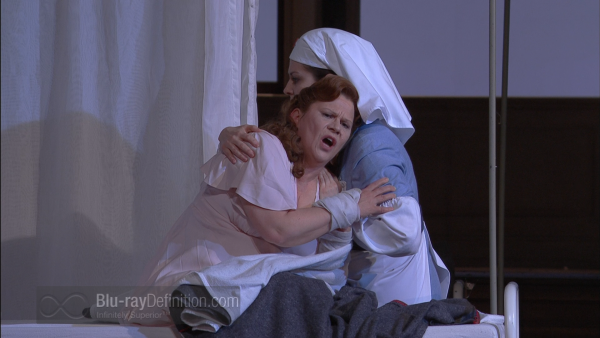 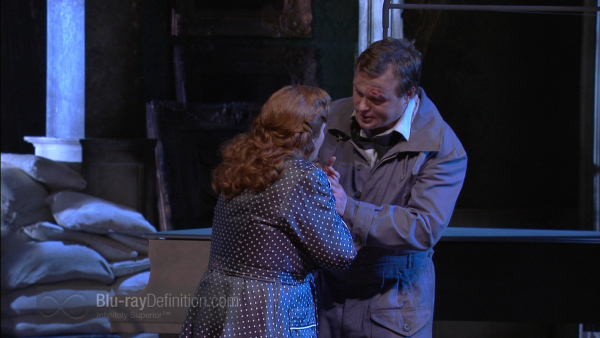