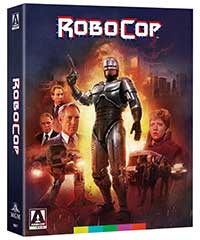 Paul Verhoeven’s (Flesh + Blood) Hollywood debut was this now enduring sci-fi visual effects classic, RoboCop, from 1987 that has a place right next to other genre films of the era such as The Terminator and Aliens. Given this is a Verhoeven film, there is a bit more camp mixed into the action, but that only serves to make the film a little more entertaining as at no time does the dystopic vision of the near future ever feel overwhelming or like it takes itself too seriously.

The film takes place in Detroit in the near future. Heroic cop Alex Murphy (Peter Weller, The Adventures of Buckaroo Banzai) is gunned down in the line of duty and is rescued and resurrected as part of a top-secret new program that turns him into a cyborg crime-fighting machine. RoboCop is so effective that he practically wipes out crime from the streets of Detroit within weeks, but soon his human memories begin to return and he finds himself tortured by his past and wanting revenge on the criminals who killed him.

The film is a glorified B-movie that is good despite that and the cheesy trappings that could have derailed it at any moment thanks to Verhoeven’s uncanny ability to wrangle a ridiculous film into something much better than it ought to be. He would do it again with films such as Total Recall and Basic Instinct. 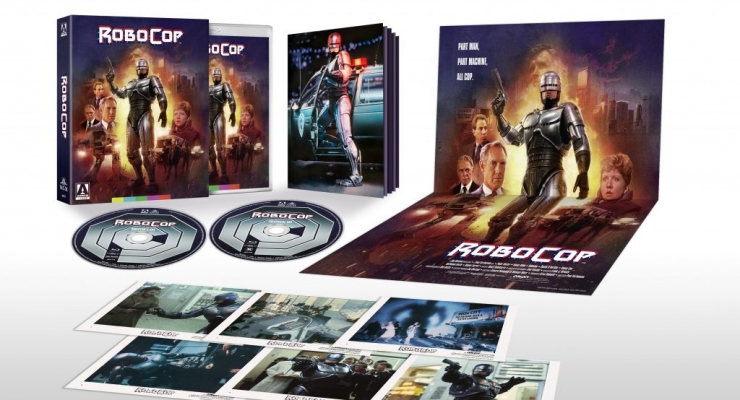 This Arrow Video release of RoboCop is taken from the 4K restoration of the film from the original camera negative by MGM, transferred in 2013 and approved by director Paul Verhoeven. It is provided in an AVC 1080p encodement framed at its original 1.85:1 theatrical aspect ratio.  The 4K restoration on Blu-ray looks great for a 1987 vintage visual effects-driven film. The grain structure is maintained, and it looks organic. The shadows are reasonably nuanced, with just the slightest hint of some washout in the blacks in some frames, but otherwise, they look solid and deep.

RoboCop comes with the original lossless stereo and four-channel mixes plus a DTS-HD Master Audio 5.1 option on both cuts of the film. You really can’t go wrong with either mix here. The original stereo mix is wide, dynamic, and clean. The 4.0 expands the soundstage and the 5.1 is rather aggressive and a surprisingly effective remix of an older action film that also extends the low end quite nicely.

The bonus features are where this reissue from Arrow really kicks things up to a thousand, offering up three audio commentaries, a slew of new featurettes, three cuts of the film, and a lot more. Fans need this release – full stop.

A classic 1980s flick that has all the Paul Verhoeven trademarks is reissued here in a fantastic, feature-rich limited-edition collection from Arrow Video. A steelbook edition is also available. Either way, this is a release to add to your collection or give as a gift.

RoboCop Limited & Steelbook Editions are out November 26, 2019 from Arrow Video