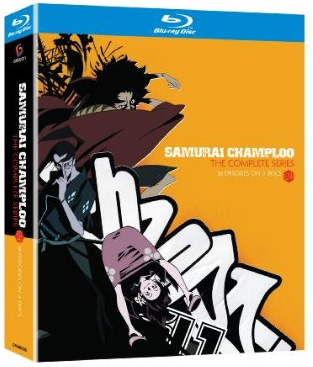 Samurai Champloo is a 26-part anime series created and directed by Shinichirō Watanabe, known for his previous creation, Cowboy Bebop, and also his two short films in the Animatrix collection, Kid’s Story and Detective’s Story. Although Samurai Champloo bears a resemblance to those previous works from Watanabe in his highly stylized animation style and even Cowboy Bepop’s use of three protagonists, the similarities do not extend much further than that. 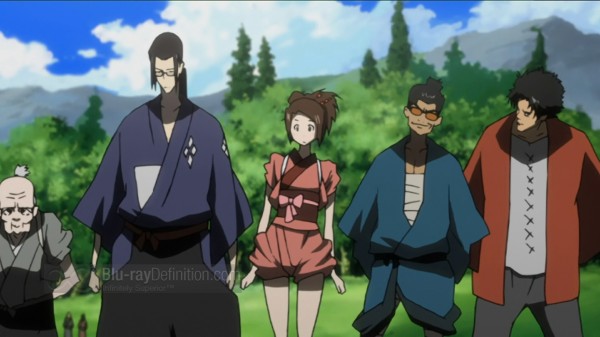 In Samurai Champloo, Watanabe blends an anachronistic style of animation, history, and music set in Japan’s Edo period. A hip-hop soundtrack melds with samurai action and comedic elements in an engaging story of three unlikely companions on a journey together across Japan. Fuu, a young woman working in a teahouse, saves the lives of Mugen, a roguish swordsman, and Jin, a ronin (a Samurai without a master). In exchange she asks them for their help to find a samurai who smells of sunflowers. The three journey across Japan, taking on different jobs to help pay for their expenses on their journey and they meet up with many shady and dubious characters along the way. But there is a tension underlying their journey together — Mugen and Jin have a battle against each other to finish, and each has promised that they will be the only one to kill the other.

Samurai Champloo is filled with drama, suspense, action, and comedy. The anachronisms, such as martial arts styles based on break dancing, beat-boxing bodyguards, and footwear that looks like Addidas, quickly fade into the background and become simply a part of the Champloo world. The series laid the groundwork for other hip-hop inspired, cross-genre, anime works like Afro Samurai, which took the theme — and the violence — even further. Samurai, Champloo, however, will always be the original and it proves Watanabe’s skill as an animator beyond his work in Cowboy Bebop. 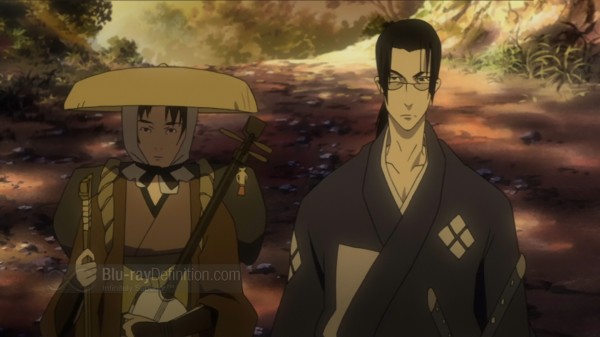 Samurai Champloo arrives on Blu-ray in an AVC/MPEG-4 1080p/24 encoding of its original 1.78:1 aspect ratio. Although the source for Samurai Champloo looks clean and line art is clearly distinguishable, there is a general haze over the picture, perhaps due to artistic intent that softens the image. Background details in particular tend to lose a bit of their distinction. Otherwise, there are no detrimental artifacts and the series color palette, which is made up of mostly drab earth tones with only occasional splashes of vibrant primaries, is quite stable. 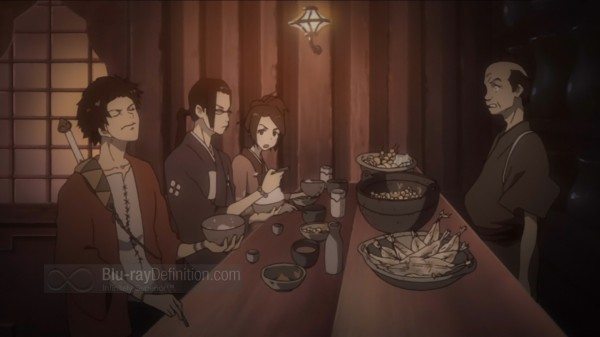 The sound for Samurai Champloo is very well done. The hip-hop infused soundtrack resonates with deeply extended low frequencies while the high frequencies are smooth and mellow. The latter is very important as the series is filled with the sound effects of swordplay. The sounds of metal clashing against metal never becomes fatiguing. The surround channels are put to good use, but not over used. There is occasionally some dialogue panned into the rear, and the surrounds are filled with subtle, but audible, ambient sounds that make for a lively presentation that draws the listener into the action. Dialogue is clean and the dynamic range is wide, but never overwhelming. 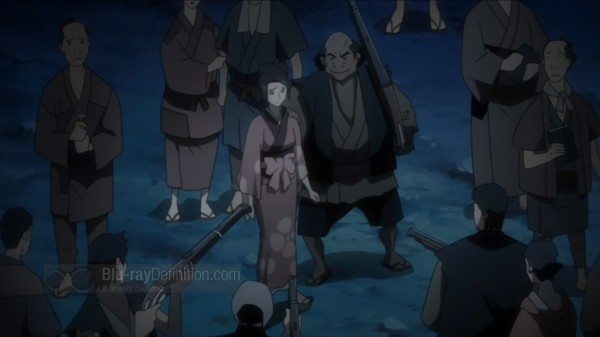 The supplements on this release are disappointing, to say the least. Outside of a concept art gallery, there is nothing new of interest here. Everything is basically just recycled from the series itself, such as promo videos or the opening and closing themes without the credits. 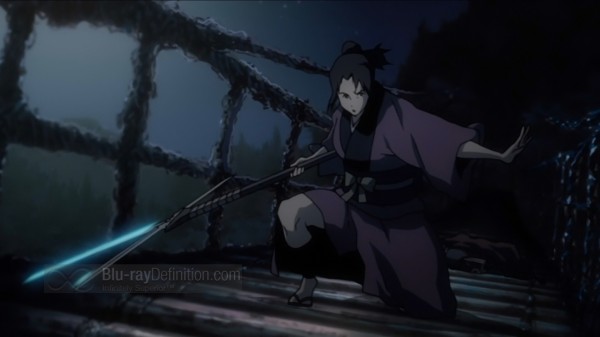 With its well-developed characters, modern soundtrack with some of Japan’s top hip-hop artists, and a beautiful animation style, Samurai Champloo: The Complete Series sets a high standard of creativity in the world of anime. Add to all of that a very solid Blu-ray release from Funimation and this set is difficult to pass up, despite its weak offering of supplemental materials. Highly recommended.