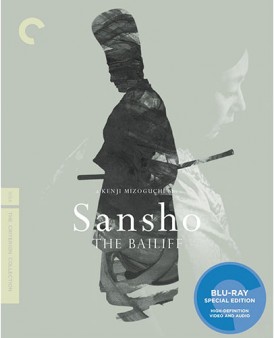 Sanshō Dayū (山椒大夫, Sansho the Steward or Sansho the Baliff) from Mizoguchi Kenji, based on an ancient story as told by author Mori Ōgai in his work, by the same name, from 1915, Sanshō Dayū. As it film has all the earmarks of the Mizoguchi style – a keen eye for period detail, powerful imagery, and a reliance on long takes that build the intensity and drama of the situations.

A tragedy of love, loss, and family, the story follows three aristocratic family members during the Heian era of Japan, Tamaki (Tanaka Kinuyo) and her two children Zushiō (Hanayagi Yoshiaki) and Anju (Kagawa Kyōko). Forced to flee from their husband and father when he is branded a traitor for being too kind to peasants, the three are eventually separated, Tamaki forcefully sold into prostitution and Zushiō and Anju sold into slavery for the steward Sanshō. Their lives will eventually all take different, tragic turns.

Gorgeously filmed with powerful performances all around and a slow-burning build up to its denouement, this well-loved classic is a must-have film for lovers of Japanese cinema.

(Editor’s Note: Parts of this review not pertaining to this specific release were previously published as our Sanshō Dayū/Gion Bayashi [Masters of Cinema] [UK] Blu-ray Review. All screen captures were taken from their respective releases.)

Coming to Blu-ray in an AVC/MPEG-4 1080p encodement from Criterion Collection, Sanshō Dayū here still looks somewhat uneven and just a tad soft with some visible source damage coming in the form of scratches and tramlines. With that being said, Criterion has worked some sort of voodoo on this and improved the imagery as compared to the previous release from the Masters of Cinema series in the UK. Mainly, the image looks just a bit sharper, grain structure is a little bit finer, albeit slightly more pronounced in darker areas, and the image overall is darker. The latter leads to deeper blacks and shadows and a stronger sense of contrast, whereas the Masters of Cinema disc seemed to have just a higher overall gamma level, and looked a bit faded and rough in comparison.

The original monaural Japanese soundtrack is offered in LPCM 1.0 (48kHz/24-bit) and while there is some audible hiss, it presents a reasonable amount of range and intelligible dialogue given the limitations of the format and the age of the source.

If we’re comparing the Masters of Cinema release to this release from Criterion Collection, then in the supplements department, it’s a wash, assuming you don’t count the double-feature from Eureka’s release and the bonus standard definition DVD as supplements. Where the Masters of Cinema disc contained a Tony Rayns commentary/introduction as the sole video extra, its booklet also contained a reprint of the 1915 story on which this film was based. Criterion, on the other hand, ports over an audio commentary and three video supplements from 2007 and includes a booklet with essay and reprints of two versions of the Sanshō Dayū tale, the 1915 story and an earlier version.

My second time through Sanshō Dayū in high definition, and I am still floored by the magnificence of this film. It is an inspiring look at the resilience of the human spirit even in the face of the worst of all possible situations. Mizoguchi’s direction is intensely beautiful as is the acting he draws from his leads. It is good to see this film come to Blu-ray from any of the fine, “videophile” studios.