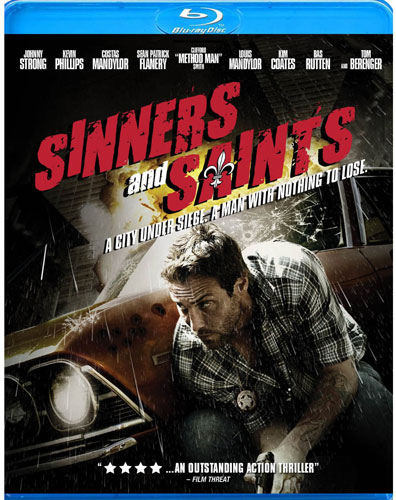 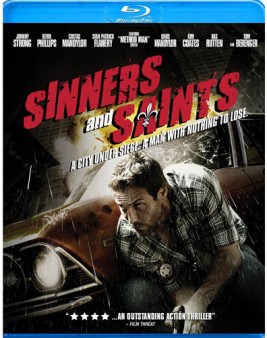 In Sinners and Saints, set in post-Katrina New Orleans, Detective Sean Riley (Johnny Strong) is haunted by the death of his young son and the failure of his marriage. Seemingly going of the rails, Riley is a bit of a loose cannon on the job as part of the street crimes division. When a raid of a drug den goes south and his partner is killed, Riley ends up in hot water with his commanding officer, Captain Trahan (Tom Berenger). He’s bumped to homicide division and teamed up with a young homicide detective, Will Ganz (Kevin Phillips), to help solve a series of mysterious murders involving victims that have been burned to death by being set on fire and then extinguished multiple times. They must rush to find the killers before retaliation occurs, one of the victims being the treasured, straight-laced brother of a notorious New Orleans drug king pin. The investigation soon leads Riley and Ganz to Colin (Sean Patrick Flanery), Riley’s longtime buddy and a security contractor. It’s not long before the two detectives realize they have been dropped in the middle of something much bigger than they ever thought.

Gritty and compelling with absolutely mesmerizing gunplay, Sinners and Saints is a satisfying crime drama that succeeds without much of the Hollywood gloss, but still goes toe-to-toe with most of its better funded counterparts. The film isn’t without its faults, however. The plot is a bit vague, to say the least, and gets especially convoluted by the third act. In the end, however, Sinners and Saints is more about the journey and gritty action than anything else and it succeeds on those levels.

Coming on a BD-25 with a mid-level bitrate AVC/MPEG-4 encoding from Anchor Bay Entertainment, Sinners and Saints is a grainy, gritty film, which isn’t necessarily a bad thing. It looks quite textured, three-dimensional and detailed with strong contrast and nice colors. However, it does often suffer from black crush and in some scenes that graininess is pushed a bit too much, making the finer points of the image, especially things like overhead power lines and so forth get a bit lost.

Audio is a Dolby TrueHD 5.1 (48kHz/24-bit) soundtrack that is supported by a hefty amount of low frequencies. The musical soundtrack’s rhythms pulsate through your bones and the incessant gunshots are big and boomy without becoming fatiguing, meaning the high frequencies sound natural. Dialogue is clean and clear as well.

A brief behind the scenes featurette that offers some production footage and 7-minutes of deleted scenes make for a weak selection of extras on this release from Anchor Bay.

A fine throwback to the old school crime dramas that effectively captures the journey of the troubled cop, Sinners and Saints comes to Blu-ray in an equally gritty – but not bad – high definition transfer from Anchor Bay Entertainment that’s worth picking up for fans of the genre.