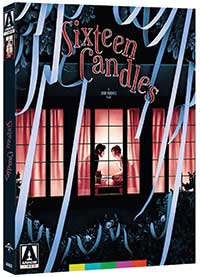 John Hughes first film as writer/director, Sixteen Candles, was actually meant to follow another of his era-defining classics, The Breakfast Club, but Hughes wrote the former in just one weekend after being inspired by a headshot of actress Molly Ringwald when casting her for The Breakfast Club, and the rest, as they say, is history.

This teen, coming of age story tracks outsider Samantha (Ringwald) who, on her sixteenth birthday is forgotten in the bustle of the planning for her older sister’s wedding. Meanwhile, back at high school, the unconventionally beautiful Samantha with her red hair, freckles, a penchant for new wave music and her “dipshit wedding dress” has a crush on the school hunk Jake Ryan (Michael Schoeffling), who is dating the school “it” girl, a blonde beauty who is conventionally gorgeous and popular much the same way Sam’s older sister is. The situation becomes embarrassing for Samantha when Jake discovers a sex quiz she filled out in which she reveals she’s “saving herself” for him.

With an outer veneer of the familiar teen sex comedies of the era, but more of an overall, family-friendly vibe with some albeit troublesome spots – many of the male characters are still let loose here to ogle, get handsy, and be basically crude without consequence, then there’s the awful Long Duk Dong (Gedde Watanabe) character that has definitely not aged well – Sixteen Candles immediately set up Hughes as the voice for a generation of teenagers coming of age in the 1980s and catapulted actress Molly Ringwald – who was playing her actual age — into superstardom.

Anthony Michael Hall also made a name for himself here playing the hormone-driven virgin who consistently turns his very much unwanted attention toward Samantha. Despite, again, the troublesome teenage misogyny that is allowed to play for laughs, Hall’s innate comedic character was already on full display here and it would come into full play in another John Hughes film, Weird Science. 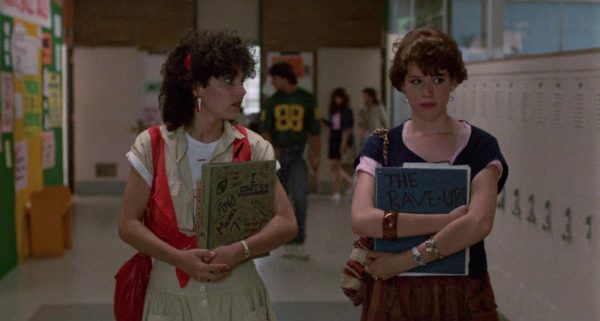 Sixteen Candles arrives in a new restoration by Arrow Films from a 4K scan of the original negative with a newly remastered HD presentation of the Theatrical Version of the film (92 mins), plus the Blu-ray premiere of the Extended Version (94 mins), featuring the additional “cafeteria” scene. The film is framed in 1.78:1 and offers up an image rich in crisp detail and lots of organic film grain. The colors and contrasts are all solid here and in comparison to the previous DVD and Blu-ray release there is a lot more high-frequency information.

There are a lot of new interviews and other bonus materials included in this collection. The interviews with the cast and crew are all worth watching as is the excellent 20-minute-long video essay from Soraya Roberts.

A classic of the teen genre from the 1980s that set up John Hughes as the go-to for teen comedies of the 1980s, this Sixteen Candles restoration from Arrow Video is superbly done and presented on Blu-ray with gorgeous transfer and bursting at the seams with brand-new bonus materials.