1972’s Snoopy, Come Home was the second full-length feature for Charles M. Schulz’s Peanuts gang. Continuing in the tradition of the creator’s comic strip and director Bill Melendez’s previously set out vision in the TV specials and the feature-length A Boy Named Charlie Brown, Snoopy, Come Home keeps things relatively light while sticking to comedic slapstick, brief vignettes, and the occasional interjection of social commentary relevant to its era. This story concentrates on kids’ favorite character Snoopy and his adventures with loyal avian companion Woodstock. After Snoopy receives a letter in the mail from his first owner Lila telling him she’s sick and asking if he will come visit her in the hospital, the frisky beagle decides to go. After an eventful journey with Woodstock, which includes a musical “o dogs allowed” interlude that is the standout sequence of the film, Snoopy decides to stay with Lila, he must return to Charlie Brown to tell the perpetually down-on-his-luck Charlie the bad news. While the second Peanuts feature is definitely more squarely aimed at children than the previous film, there’s still enough intelligent wise cracking here and clean family fun to hold the attention of adults over its 80-minute run. 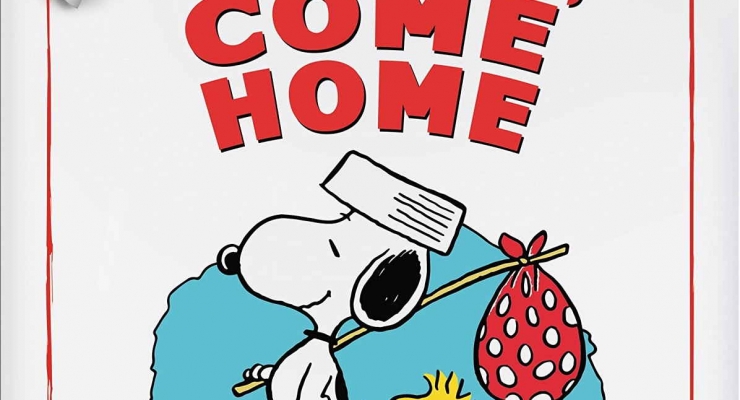 The AVC 1080p encodement for Snoopy, Come Home on Blu-ray Disc in its original 1.33:1 aspect ratio looks fantastic. The image is colorful, clean, but still has a fine layer of organic grain giving the picture texture.

There is a lossless 5.1 mix of the soundtrack in DTS-HD Master Audio and a “stereo” Dolby Digital 2.0 track that really sounds like monaural to my ears. In fact, the 5.1 track basically sounds like a monaural mix with stereo reverberation mixed through the channels. There is very little stereo imaging across the front and you’d be hard pressed to pick out any solid discrete sound effects in the surround channels. That said, it is clean and there is good dynamic range with just a bit of a boost in the low-end.

Snoopy, Come Home comes with nothing beyond the feature film on Blu-ray Disc.

Peanuts has gone on to become a mega-franchise that is particularly big around the holiday season, with its classic holiday TV specials a big part of the celebrations. The other specials and feature-length films are often overlooked, however, and they are equally as good or in some cases, even better than the holiday specials. Snoopy, Come Home is good fun and worth watching for the entire family. Too bad no one could see fit to include at least a digital copy or DVD with this barebones albeit beautifully restored edition.