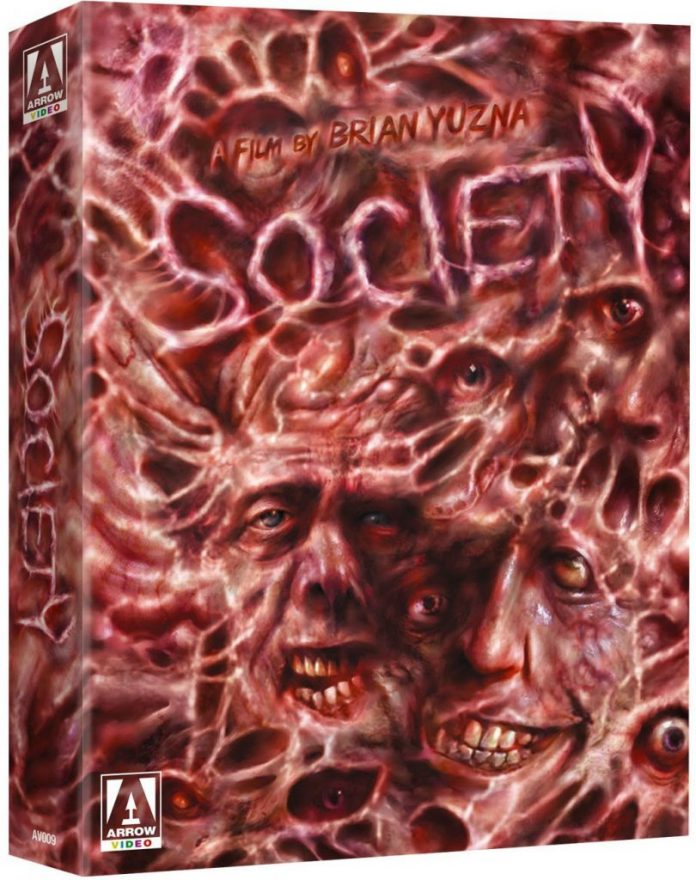 Bill Whitney (Billy Warlock) is your typical upper crust teenager. He’s got a bit of status at his school, a beautiful girlfriend, a rich and loving family but there’s a certain haze to his life that he cannot explain. Lately he’s been getting surreal visions that do not involve anything nice. It’s almost a forewarning of things to come. He’ll be biting into an apple and before you know it there are maggots and worms all over it. It’s as if Bill lives in a sort of netherworld where nothing is, as it seems.

Society subtly (or not) implies that it’s all about “high society.” The rich live, eat, drink, party, and run the world while oppressing everyone else that do not fit their standard, whether by breeding or class. In the film it’s both. Those that do not fit in with this “society” are prepped for a “shunting,” which is basically their version of being eaten or absorbed. This happens several times during the film and it is an impressive feat.

The acting is cheesy in spots but Billy Warlock does his best as the adopted son of a rich family who have ulterior motives. One day he discovers a recording of his parents and sister and the incestuous plan for the evening and he goes nuts try to uncover the truth. To say that this film turns Oedipus on its head would be understatement. One can almost call Society the perverted cousin to Cronenberg’s Videodrome or eXistenZ. The difference here is that Society plays on high society and how they keep everyone else down and use them for food.

Brian Yuzna, making his directorial debut, was certainly no stranger to gore and horror, having written and produced Re-Animator and From Beyond. Armed with a low budget, a script, great special effects work he set out to make this very unconventional and allegorical tale depicting the upper crust portion of society as flesh absorbing monsters. Screaming Mad George lent his skills as surreal effects artist to bring about some really cool and nasty creations.

Does the film work on an overall level? Sure. Some would even say that high society still rules with an iron fist to this day, so the more things change the more they stay the same. Society originally premiered at Cannes in 1989 and other festivals, but it didn’t get a stateside release until 1992. I reckon the studio(s) didn’t know how to market the film or how to edit it to get a standard R rating back in ’89. Arrow Video presents the full unrated 99-minute version on Blu-ray. If you’re a Brian Yuzna fan then this is a no-brainer. Keep reading to see how this fully loaded special edition holds up in terms of technical specifications and special features.

Society has been remastered from a 2K scan using the very best 35mm elements available. Grain levels are top notch, colors are vivid but they seem to have been pumped up just a tad bit. It may have something to do with it still being the late 1980s and everyone rocking obscenely tacky fashion and hairstyles. Banding and pixilation was never an issue. Contrast and sharpness levels were nice and balanced and I did not detect any crush during the nighttime or darkly lit interior shots. Arrow Video has done a great job with this video presentation.

Society is given a 2.0 LPCM stereo track to play with and it does sound very good. So good, in fact, I had to turn the volume down a bit. Once the “action” starts it doesn’t stop rocking. It’s a very aggressive 2.0 audio track – dialogue is front and center but has clear separation between the left and right speakers. Ambience and directional effects are given some depth. The film’s soundtrack never feels restricted to just two channels ever. There are many parties thrown and the music livens up the horrid actives quite nicely.

Arrow Video went all out on the special features. We have lively extras that include an audio commentary by Brian Yuzna, brand new interviews for this release featuring the primary cast talking about what it was like to work on the film. Everyone enjoyed being part of the film and it shows. Devin DeVasquez is still quite stunning. I still get Billy Warlock and Damian Chapa confused, too. Aside from two of the special features showcased (Society World Premiere and Screaming Mad George music vide0) everything is presented in high definition.

Society — at least the undercurrent of the film —  is still very much relevant today. The film showcases a class war and struggle mixed in with some unpleasant body and bodily fluid melding. The acting and some of the ADR does come off rather goofy in some parts but the overall film is actually quite well made and the special make-up effects are very disturbing. Arrow Video has crafted a pretty insane package for the Blu-ray. Society is recommended.