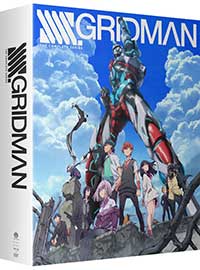 SSSS.Gridman is a Japanese anime television adaptation of the 1993–1994 tokusatsu kaiju series Denkou Choujin Gridman. The series is co-produced by Tsuburaya Productions, the production company behind Gridman and the Ultra Series, and Trigger.

The mecha/kaiju series follows Hibiki Yūta a first-year high school student living in the fictional Japanese city of Tsutsujida. He discovers he has the ability to see things that others cannot, like giant sleeping kaiju in the streets of his city, and a talking mecha named Gridman in the reflection of his friend Takarada Rikka’s old computer.

Yūta gets pulled into the computer and drawn into Gridman as his operator, where he must battle kaiju in destructive battles in defense of his city. But there’s something strange that happens. After the battles, the city seems to reset, and no one remembers what happened. People who disappear or are killed by the kaiju are simply erased from existence. The only ones in Yūta’s life who remember or know what’s going on are his friends from school that become part of the so-called ‘Gridman Alliance’: Utsumi Shō, a fan of the Ultra series and tech wizard; Takarada Rikka, the sole female member of the alliance and a girl Yūta develops a crush on; and the members of the NGJHS, short for Neon Genesis Junior High Students, a group of four ‘Hyper Agents’ dressed in black who pose as youths. They are fragments of Gridman and can recombine with the Hyper Agent to unlock his true form.

Yūta and his alliance of friends find themselves locked in a battle with the god of their world, who, as it turns out, is also one of Yūta’s classmates, a popular, gaming obsessed girl named Shinjō Akane, who is a fan of kaiju as well. The revelation that she is the one controlling the kaiju is a stunning twist, but the biggest surprise of all about how Akane is connected to their world is the one that has the most consequences and will explain a lot of the strange things happening, like people’s bouts of amnesia or why the damage to the city seemingly vanishes after major battles.

I have never had the opportunity to see the original live-action series that this anime series is based upon, and that may be a good thing in this case, because I had no reference point outside of the general mecha and kaiju subgenres. This series hits the mark on both counts, avoiding some of the more faux spiritual elements that some mecha lean towards and also mixing genres brilliantly, even with the kaiju, that seem more mechanized than fully robotic.

SSSS.Gridman also has an enjoyable, motley crew of characters that are well fleshed out and often provide much-needed comic relief. From the NGJHS in their outfits straight out of Tarantino’s Reservoir Dogs to the attractive and insecure Takarada Rikka, everyone fits neatly into their role, melds well with the group, and grows as the series progresses.

And I haven’t even mentioned the excellent designs, artwork, and animation that leaves viewers dazzled with eye-popping colors, action sequences, and titanic kaiju. 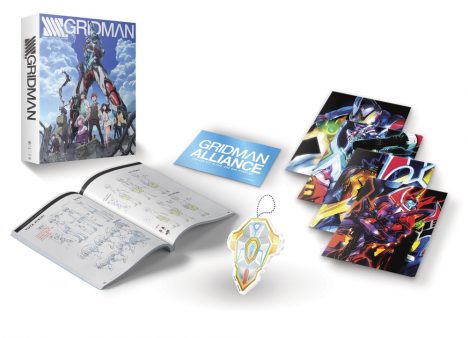 SSSS.Gridman arrives on Blu-ray with an excellent transfer of the digital animation in a 1.78:1 AVC 1080p encodement that has strong color reproduction, clean and crisp line art, and no compression artifacts.

SSSS: Gridman comes to Blu-ray with the original Japanese-language mix in Dolby TrueHD 2.0 stereo and the English dub in Dolby TrueHD 5.1. The stereo mix sounds constrained to my ears, mastered rather low forcing me to turn the volume up way higher than I normally would. Apart from the levels, it does have clean dialogue and good stereo imaging and the cast does an excellent job with the vocal performances. The 5.1 mix is the vastly superior version here, with excellent dynamics and low end, good use of the surrounds, and a solid voice cast. 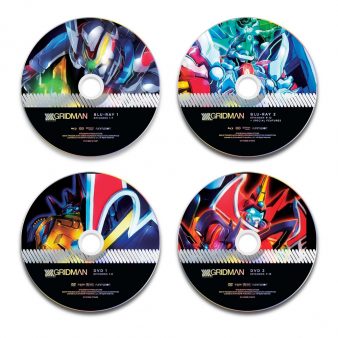 There aren’t much in the way of on-disc bonus materials, but the collectible swag is great with this set.

Is SSSS.Gridman an anime series that will grow into a multiple season franchise? It feels like it could be, given its allusions to classic anime and kaiju franchises, an easy blend of action, comedy, and thrills, and gorgeous animation. This Limited Edition collection if you can get it is also a collector’s dream. Go get one!

SSSS.Gridman (Limited Edition) Blu-ray/DVD is out now from Funimation