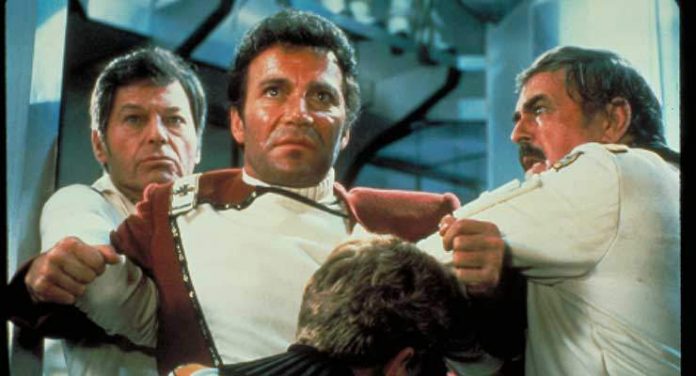 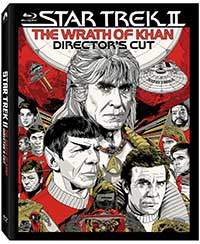 There’s a long story behind how Star Trek II: The Wrath of Khan managed to save the Star Trek franchise as a viable film and television property. After the disappointing showing for the first Star Trek movie, which did not recoup its massive budget, mostly spent on visual effects, the second movie had a lot riding on it. Paramount handed the responsibility over to the television division to make a good film at a low price. This is the source of a long-running myth that it was intended originally as a TV movie, but that is false. The Wrath of Khan was always meant for the big screen, but Paramount wanted it cheap. It didn’t look good from the beginning, though, because after a few rewrites, the script wasn’t working until director Nicholas Meyer took over and did a page one rewrite of the screenplay. The result was a film often regarded as one of the truest in feel to the original ’60s series.

Khan has learned about Starfleet’s top secret project Genesis, designed to seed dead planets with life and he intends to steal the Genesis device and use it for his own nefarious purpose, but not until he hunts down Kirk for a little a dish of revenge served up cold.

While the film misses the multiple layers of meaning often infused into the works of Gene Roddenberry, who was from his duties at the helm of the franchise, it strikes an even keel of action, drama, and swashbuckling, with just a hint of Shakespearean pathos in Khan’s futile attempts at avenging himself upon Kirk. The film fulfilled its duties well in resurrecting and ultimately reviving what was to become an unstoppable leviathan of a sci-fi franchise.

Star Trek II: The Wrath of Khan was restored in 4K for this new Blu-ray release from paramount and it has never looked better. Brought to Blu-ray in an AVC 1080p encodement, the image has obviously been cleaned up, but the detail and textures are still there and the grain structure from the original 35mm source is now much finer than it has ever looked. Colors are also quite vibrant and natural as is contrast. When the Enterprise is entering the Mutara Nebula, the purplish hue explodes from the screen. The black of space is deep and inky while the stars sparkle with shimmering whites. Flesh tones are spot on. Depth of field is quite strong as well, with only the slightest hint of softness as objects move to the background.

The English Dolby TrueHD 7.1 soundtrack is good, although some of the louder sound effects do have some audible clipping, most likely in the source that cannot be removed without damaging the quality, and dialogue is a little boxy. Apart from these things, the sound has been spruced up nicely and there’s good low-end extension and atmospherics with some discrete effects in surrounds, particular the booming sound of the Enterprise whipping overhead and phasers being blasted.

All supplements were previously released on DVD and Blu-ray except the new, nearly half-hour-long documentary, The Genesis Effect: Engineering The Wrath of Khan, which tells the long and often convoluted story of the film’s production through interviews, production footage and stills.

Star Trek II: The Wrath of Khan Director’s Cut comes with both the Director’s Cut and Theatrical Edition, which runs 3-minutes shorter. The 4K restoration is the best this film has ever looked, making it the go-to version for fans of the franchise.