In recognition of the 50th anniversary of its initial release, the widely acclaimed Italian-Algerian film, The Battle of Algiers, receives a 4K makeover in this reissue by Cult Films. Writer/director Gillo Pontecorvo delivers an unvarnished look at the 1954-57 fight for Algerian freedom from French colonialism. Native Algerians banded together in the Kasbah to form the National Liberation Front (FLN) and launch a guerilla-tactic insurgency against the French forces that lasted for three years. Shot on location in Algiers less than ten years after the last battle ended, this controversial film was banned in France for five years after its international release.

The insurgents led by Djafar (Yacef Saadi) go on a shooting spree leaving a trail of dead and wounded police officers in the streets. In response, the local French prefecture has declared martial law; the Kasbah is cordoned off and a curfew put into effect. A clandestine police operation plants explosives that destroy an entire block of the Kasbah, killing and wounding innocent people. Djafar sends out three women who will pass for French and they place deadly bombs at various popular locations around the city.

As the terrorism escalates, France sends its top paratrooper company led by Colonel Philippe Mathieu (Jean Martin) to find those responsible for the bombings as the FLN declares an 8-day strike. Mathieu rounds up and brutally interrogates Algerian men to get the identities of the FLN leaders and begins to circulate photos including those of Djafar and his lieutenant Ali La Pointe (Brahim Hadjadj) leading to the arrest of the former and death of the latter. The list of atrocities committed by both sides lengthens and are shown in the graphic details of gruesome torture sessions and wholesale machine-gunning of civilians on the street. In the face of what preceded it, the subsequent 1960 street fight between the Algerians and the soldiers is anticlimactic, as Algeria gains its freedom two years later.

Shot in a cinema verite style, Marcello Gatti’s cameras act as silent eye witnesses to the film’s titular struggle. Composer Ennio Morricone provides a score that enhances the visual impact to the on-screen violence. Seen in retrospect, the genius that went into the making of The Battle of Algiers is as evident today as it was during its award-winning premiere in 1966. With only one professional film actor (Martin) and former FLN leader (Yacef) playing an in-character part, the remaining cast members make this a realistic recreation of events that changed the history of a nation and accelerated the end of French colonialism. 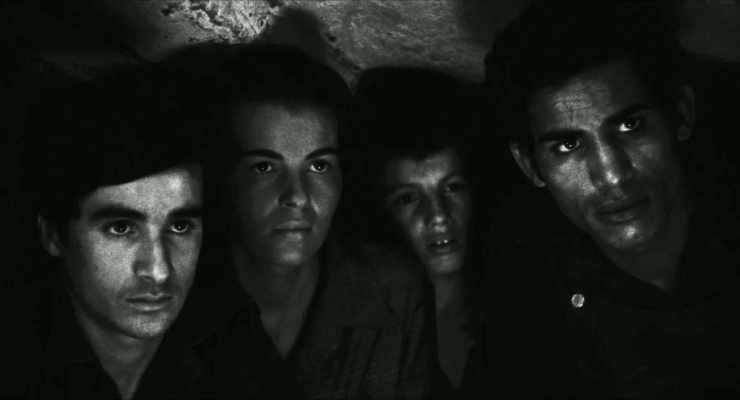 The black-and-white documentary approach has the requisite graininess that would have typified on-location films of that era. All things considered, it makes The Battle of Algiers look even more like a true account of the events of the times. The restoration wizards have done a brilliant job in taking the best source negatives and recreating the in-theater experience when the film first screened.

This release contains the following:

The Battle of Algiers was groundbreaking for its realistic depiction of guerrilla warfare. The combination of top-of-the-tree direction, cinematography, and action makes this a must-see film that, given the current world conditions is just as relevant today as it was half a century ago. Highly recommended