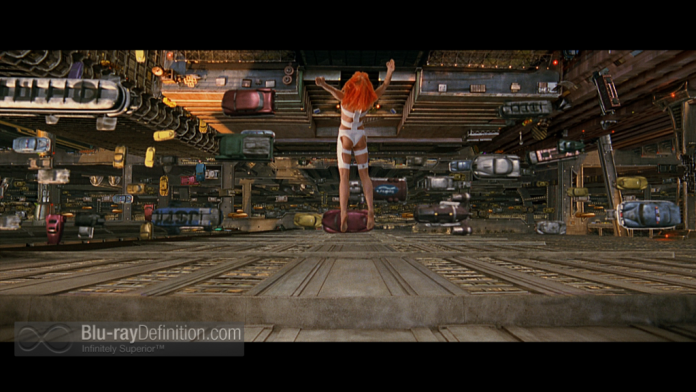 French filmmaker Luc Besson (Léon; La Femme Nikita) has always been known to make films heavier on style than substance and perhaps none of his films is more deserving of that description than Besson’s 1997 sci-fi action film The Fifth Element. With its colorful world of frenzied characters, hyperkinetic action sequences and Jean-Paul Gaultier, Element is more about looks, action, and special effects than it is about story, but it is still a wildly enjoyable ride.

It’s the 23rd Century and the Earth is in peril by a form of pure evil that comes around every 5,000 years to engulf it. The only thing that can save the world is a weapon formed by four stones representing the four classic elements, earth, wind, fire, and water, and a fifth element embodied in the form of a human (Milla Jovovich) that is in the care of an alien species known as the Mondoshawan.

A powerful businessman, Jean-Baptiste Emanuelle Zorg working with the evil to recover the hidden stones (Gary Oldman) hires a band of intergalactic outcasts and mercenaries to attack the Mondoshawan ship as they are bringing the Fifth Element to Earth’s forces. They are destroyed and only a small part of the Element’s body is recovered. She is then genetically re-engineered, but she escapes from the military facility where she is being held.

That is when former Special Forces major turned cab driver Korben Dallas (Bruce Willis) becomes entangled in the situation after The Fifth Element literally falls into his cab. With the police and the military chasing her, Korben decides to help her get to the priest, Father Vito Cornelius (Ian Holm) who holds the secret of the stones and is sworn to protect it and the Fifth Element.

Together, they must make their way to a floating vacation city known as Fhloston Paradise where they will meet the one who has been protecting the stones so they can assemble the weapon to kill the evil bearing down on the Earth. The problem is, Zorg is after the stones and out to stop the Fifth Element.

Element is a frenzied romp of a film the hardly gives time for the story to sink in. It’s certainly fun, but it is marred by a particularly annoying performance by Chris Tucker who plays an interstellar radio show host who is supposedly a sex symbol. He’s meant to be funny, but he comes across as an annoying imitation of Prince on really bad day.

The special effects, though pale by today’s standards, still hold up well under scrutiny and Willis’ performance is perfectly smug, grizzled, and humorous.Milla Jovovich, sexy as always, plays a wonderful innocent yet somehow deadly and fragile “supreme being.” This is perfect cult-classic sci-fi material. 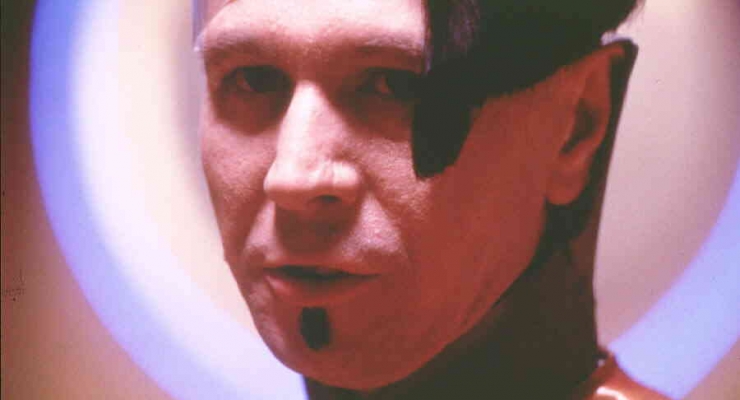 The Fifth Element returns to Blu-ray for a third time around in a new 4K restoration from Sony. While the difference between this release and the previous The Fifth Element (remastered) Blu-ray release from 2007 is not as stark as the difference between that release and its very poorly done initial 2006 release, this one is still very good and one can see the improvement in not only the brilliant color reproduction, but also depth of field, and the much finer grain structure. I would venture to say, however, that the biggest difference in this new restoration will not be seen until a native 4K Blu-ray release is available.

Like most of the titles in the Supreme Cinema Series (Sony sent us the standard release), this new reissue of The Fifth Element comes with an English Dolby Atmos soundtrack. On my non-Atmos system, this played back in a terrific Dolby TrueHD 7.1 (48kHz/24-bit) mix that, while it most likely is not as engulfing as the Atmos version, the 7.1 is very enjoyable, even more so than the original 5.1 mix thanks to the surround back channels and healthy doses of solid sound effects mixed through the room. The mastering seems to have been improved over the Remastered disc, which I found a little harsh and tweaked in the high end. Now, it is much easier on the ears, although it still favors being on the lud end of things.

The Fifth Element finally has lots of extras on Blu-ray, but they are all port-overs in standard definition of standard EPK-type material with some looks at how the visual effects, casting, costume design, and so forth all came together.

This is a fine reissue of this home theatre enthusiast favorite on Blu-ray. The 4K restoration looks stunning, although I am sure this will no doubt be issued again on the forthcoming 4K Blu-ray format to truly take advantage of all those 4K TVs. The Atmos mix is no doubt a good step up for those with Atmos systems.