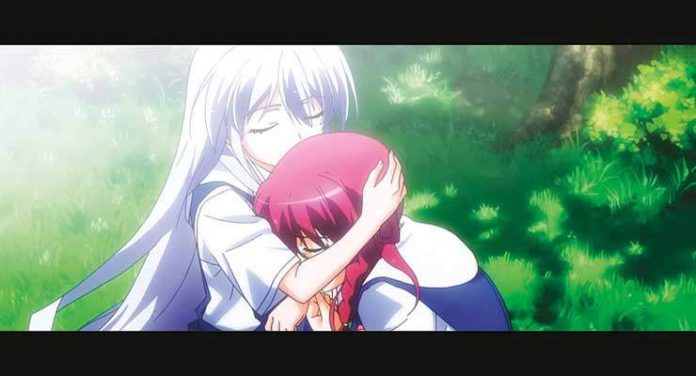 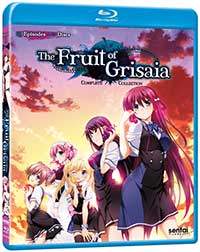 The Fruit of Grisaia is based on the adult visual novel, originally released for Windows, and subsequently PlayStation Portable and PlayStation Vita platforms. In this 13-episode series, we follow the male high school student Kazami Yūji, who transfers to the strangely desolate Mihama Academy hoping to attend high school like a normal kid. We find out that Yūji is a hitman who does black ops assignments for an off book government agency and Mihama Academy is far from a normal school. It is attended only by a few students and they are all girls who seem to be connected to influential families. As the story unfolds, we slowly begin to find out the real reason Yūji was placed at this academy and it has something to do with each of his new schoolmates. Each two or three episodes deals with the back story of one of the girls and how it relates to Yūji’s new assignment, so to speak. Komine Sachi, a senior, is almost always wearing a maid uniform and compelled to fulfill any request people ask of her, but why? Sakaki Yumiko is a second-year student and daughter of a very prominent family for whom the academy was created. She doesn’t like Yūji and is always

trying to kill him, but she hates her father even more. Irisu Makina seems happy and carefree, but her family is one of the most powerful yakuza families in Japan and she lost her place has heiress to the family legacy to her younger sister after a freak accident. Suō Amane is a buxom, third-year student obsessed with motorcycles and desperate for Yūji to fall in love with her, because of something tragic that happened to her in her past. Lastly, there’s Matsushima Michiru who’s a “fake tsundere” character with bleached blonde hair.

Although this series does apparently drift aimlessly through several disconnected storylines for a while, it does somehow manage to finally tie itself altogether and end on a fantastically gruesome note with its final major vignette/back story. I admit that it took several episodes for The Fruit of Grisaia to grab my attention, as if the writers were themselves trying to figure out where to go with this story. This is not surprising to me. I have often found that many of these anime productions take from visual novels – an inherently non-linear format – struggle to transition to a coherent story arc. Grisai finally gets there, but it takes a while. It doesn’t help the series at all that its protagonist Kazami Yūji has such a cold and removed personality that doesn’t allow for viewers to really warm up to him either, though Sakurai Takahiro should really be commended for nailing that voice performance. I’ll add that I really liked the fact that The Fruit of Grisaia was done in 2.35:1, which is unusual for a series. It helped to make it feel more cinematic and emphasized what was really pretty artwork.

The Fruit of Grisaia is the rare series that is framed at 2.25:1 and it arrives on Blu-ray, widescreen framing intact, with an AVC 1080p encodement from Sentai Filmworks that looks beautiful. The colors really pop nicely, the contrast is strong, artwork crisp, and no problems with noise and motion artifacts outside of the slightest hint of banding in some of the color fills.

The Fruit of Grisaia comes with the original Japanese-language mix in DTS-HD Master Audio 2.0 stereo as the

Blu-ray Disc’s only audio option (English subtitles are provided). The sound is superb, as seems to be the case with most Sentai Filmworks releases. We get strong dynamics, clear dialogue, and excellent overall balance. The stereo imaging is good enough to almost make one not miss a surround mix. If you really want surround, however, I found that this stereo track sounded pretty good when up-mixed with DTS Neural Surround on my DTS:X/Atmos-capable playback system.

There’s nothing here outside of the standard clean opening and closing animations and Sentai Filmworks trailers.

A slow-moving, at times meandering series, The Fruit of Grisaia spends a little too much time getting to the meat of its story, and by the time it heats up, it’s almost over. That being said, it has some really good moments, those coming in the last third of this series, which also provides the best animation work.