The Girl With The Dragon Tattoo (2011) Blu-ray Review 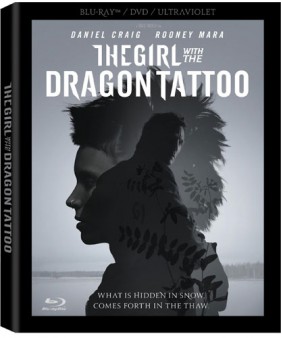 The Girl With The Dragon Tattoo, based on the first of author Stieg Larsson’s trilogy of books, tells the story of journalist Mikael Blomkvist (Daniel Craig). Formally a top notch journalist with his own magazine, Millennium, everything seemed to be okay for Mikael. That is until he lost a libel suit against his magazine. Forced to resign, Mikael begins an investigation of a 40 year-old disappearance case on behalf of a man named Henry Vanger (Christopher Plummer). Assisted by an odd computer hacker Lisbeth Salander (Rooney Mara), the two embark on a journey filled with corruption and deceit, something neither of them expected.

Having never read the books or seen the original Swedish version, I went into Tattoo with high expectations. Not necessarily because of how popular the novels are, but more because I’ve found David Fincher (outside of Fight Club, which I find to be very overrated) to be one of the more consistent Directors in Hollywood. The Curious Case of Benjamin Button, The Social Network, Zodiac, etc. Fincher just seems to know how to make a story (whether based off a previous subject or brand new material) click with audiences. Such is the case with his latest effort here in Tattoo.

It’s more the total, overall package that makes this film succeed on the level it does. From what I’ve heard from those who have read the novels, the books are quite dark, moody, and violent, but all in a manner that isn’t too over-the-top. The film version, I can assume, is faithful to the novel. After viewing his adaptation, I found, in particular, how Fincher seemed to capture the impact of the novels in a truly fine manner. The acting by Daniel Craig, Rooney Mara or Christopher Plummer is great. Craig always seems to be able to define his roles with a kind of style that makes me just watch with a smile. I really haven’t seen much that Mara has starred in, but her performance here is chilling, almost creepy, but in a good kind of a way. Plummer, well Christopher Plummer is a true legend in my opinion. A quick glance over at his IMDb shows the kind of actor he is.

Will Dragon Tattoo appeal to everyone? I doubt it as the subject matter (and really one scene, one which I even found a bit tough to watch) may be a bit much; however, if audiences can go into this film (and the novels as I intend to do), you just may come out amazed at what Fincher and company have made.

The 2:40:1 framed, AVC MPEG-4 encoded transfer is excellent. Akin to that of most of David Fincher’s films, Tattoo was shot using many low-lit techniques famously used by Fincher contributor Jeff Cronenweth (he’s worked with Fincher on The Social Network and Fight Club). Normally, lower lit sequences might effect the overall impact of a film’s transfer with lost detail; however, this is the exact opposite here. Detail is as strong as we’ve come to expect from Sony’s day-and-date Blu-ray titles. Contrast levels are equally as solid with accurate color reproduction and flesh tones. Close ups do showcase fine textures on varying clothing worn by characters. Colors, mostly consisting of dark blacks, are excellent. Blacks are deep, inky and, even though they dominate the transfer, they looked great throughout. Like the below audio, this video presentation is faithful and one that captures the true essence of the story being told.

The film’s provided DTS-HD Master Audio 5.1 track is downright amazing. Dialogue is consistent throughout via the center channel. No instance of drop out or muddle dialogue. The film’s low-end hits the walls creating solid response, whether during the quieter moments where the bass comes from the film’s score, or during the heightened action sequences. Speaking of the action, it’s during these scenes that the overall atmosphere is excellent. Rain, wind, weather elements, creaking of floor boards, etc. Every little discrete effect has been expertly placed in a truly perfect manner. Pans between the rears are invisible all but helping to finish off what is, in this reviewer’s mind, one of the best aural efforts from any major studio on Blu-ray. Truly, truly excellent material here.

The included supplements feature a plentiful collection of behind-the-scene info on the film. In fact, this may be the most behind-the-scenes info I’ve seen put together for one film’s Blu-ray release. All features are in HD, minus one which is noted below:

Director David Fincher has brought to our eyes and ears the first part of Larsson’s epic trilogy with quite the interesting film. Sony, as one might expect, has given this the kind of Blu-ray release that will push it to the forefront of the ‘Best of 2012’ contenders. The transfer is faithful, the audio excellent and the features, whew, extremely informative. This one deserves a spot on every shelf. Highly Recommended!