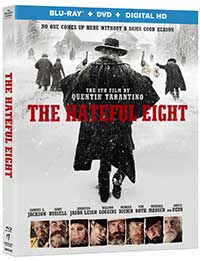 With his eight film, Quentin Tarantino returns to the western genre that he dipped his toe into with 2012’s Django Unchained. The Hateful Eight, rumored to have originally been an intended sequel to Django, is more of a traditional western than its predecessors, but don’t let that fool you, this film has Tarantino all over it, from its non-sequential storyline to its chapter demarcations.

Set in Wyoming only a few, maybe several years after the American Civil War, the story follows bounty hunter John “The Hangman” Ruth (Kurt Russell) whose trying to transport his prisoner Daisy Domergue (Jennifer Jason Leigh) in a stagecoach through the wintry landscape to Red Rock where she will face justice for the crime of murder. But the stagecoach comes across two strangers, first the infamous bounty hunter Major Marquis Warren (Samuel L. Jackson), a black former Union soldier turned bounty hunter who was known during his Civil War days for his brutal killings of white rebel soldiers looking to collect the bounty the South placed on his head; and Chris Mannix (Walton Goggins) a southern renegade soldier claiming to be the new sheriff of Red Rock. The three form an uneasy

acquaintance (Ruth and Warren having met once years before) and agree to share the stagecoach with a blizzard baring down on them. They decide to stop at Minnie’s Haberdashery, a mountain pass stopover and wait out the storm, but once there they are met not by Minnie, but by four strangers. Bob (Demian Bichir) a Mexican claiming Minnie left the place in his care while she went away to the other side of the mountain, a British man, Oswaldo Mobray (Tim Roth), the hangman heading to Red Rock, cowboy Joe Gage (Michael Madsen), who claims he is going to spend Christmas with his mother, and elderly Confederate General Sanford Smithers (Bruce Dern). Ruth and Warren are immediately suspicious that one or more of the people there may be working with Domergue to set her free or to steal his bounty. This may not be such an easy stopover after all, and perhaps, before it’s all said and done, somebody may not get out alive.

The Hateful Eight did not do so well at the box office, coming in under its ~$62 million budget, but this may be one of Tarantino’s finest, if quietest films to date. The filmmaker has crafted one of his most clever character studies here, a true paean to the art of filmmaking in both the depth of story making, the throwback to the old slow-burn westerns, and his chosen format of production, the UltraPanavision 70 wide format. While he does put his customary signature on H8 by starting the film in one place and by the end going back to the beginning to show us how it all got started, he keeps his use of skipping around the timeline to a bare minimum here, instead opting to really bring us into a deep mystery, almost Clue-style in its setup.

The majority of the film takes place in the quiet confines of Minnie’s Haberdashery where only the jarring, kicking open of the broken front door occasionally breaks the tense silence, or a scene outside in the blizzard as some stakes are being driven into the ground to run a rope line to the outhouse as the agitated score by Morricone plays sweepingly over the wintry scene.

We are left to look on as “the hateful eight’ inside the fire-warmed room suss each other out as possible conspirators, killers, or maybe innocent bystanders caught in abad situation. Samuel L. Jackson gets the best role and the best monologue of the film as he butts heads with retired Confederate General Smithers, trying to bait the old man into drawing a pistol on him so he can kill him.

The tragedy here is that, although it was nominated for Best Cinematography at the 2016 Academy Awards, The Hateful Eight was passed over on favor of The Revenant, which is shocking display of ineptitude. Robert Richardson made masterful use of the UltraPanavision format, a format, mind you, that is practically never used in modern times for feature films today and is the widest screen format available. The outdoor scenes in Hateful Eight are breathtaking and the colors are amazing.

Quentin Tarantino shot The Hateful Eight in 65mm UltraPanavision, a 2.76:1 70mm format that is the widest feature film in over twenty years. And he took the film on a “Roadshow” tour in 70mm projection editions. This is the best possible way to view H8, way better than the resolution offered by 35mm film stock and better than Blu-ray even. With that said, Anchor Bay has offered up a beautiful transfer of this film on Blu-ray in AVC 1080p that looks about 10 times better than the best original HD production transferred to Blu-ray. The contrast is nearly flawless, albeit in one or two places the blacks drop a little too low, and the textures are magnificent. The film grain is so fine is nearly non-existent, yet the image looks organic, not digital and there are no digital flaws like banding or noise.

The movie gets a DTS-HD Master Audio 5.1 sound mix that is very effective in surrounding one in the sounds of

the winding winds of the blizzard covered Wyoming mountainside, the constantly kicked open and slammed shut wooden door of Minnie’s Haberdashery and the crackling fire of the hearth that warms the cold bones of the hateful eight that title the film. When the bullets inevitably start flying, there’s more than enough low end to give them kick. Ennio Morricone’s fantastic score drenches us in lush orchestration and natural, balanced ambience.

There is a disappointingly slim amount of extras on this epic film’s Blu-ray release.

Tarantino’s ultra-widescreen western The Hateful Eight, shot on 65mm, looks and sounds splendid in the Blu-ray edition from Anchor Bay Entertainment. The film does not get the credit it deserves either. It is masterful all around.