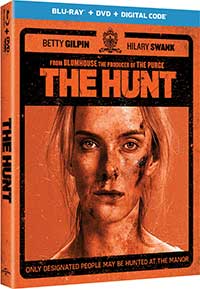 The Hunt from director Craig Zobel and writers Nick Cuse and Damon Lindelof has had a long and controversial path to release. It was originally scheduled for a September 27, 2019 release then pushed back to October 18 before being moved back to its original release date of September 27. Then the promotion for the film was pulled on August 7, 2019, by Universal in the wake of the Dayton and El Paso mass shootings. Shortly after that the film was pulled from the Universal’s release schedule. Finally, the film was rescheduled to March 13, 2020 (Friday the 13th), but with the COVID-19 lockdowns making it difficult to recoup financially, Universal released the film early to digital streaming platforms March 20 to only a week after its theatrical release.

What makes this particular film so controversial is that it is a rather violent, horror, thriller that follows a group of neoliberal elites who kidnap and transport a group of working-class Conservatives to a secret getaway known as ‘The Manor’ where they literally hunt them as prey. Why?  Well it all started when a text thread the neoliberal blowhards get on insulting the ‘ratf***er-in-chief’ and joking about a hunting trip at ‘The Manor’ where they get to hunt ‘deplorables’ is leaked to the press and right-wing conspiracy sites run with it, believing there is literally an underground cadre of liberal elites who secretly hunt Conservatives for sport. All of these high-paid ‘Libs’ including Athena (Hilary Swank) end up losing their jobs and that’s when they devise a plot to get even with the people who tweeted angry conspiracies against them, namely any random ‘redneck’ on social media. Among the group of ‘deplorables’ is Crystal (Betty Gilpin, GLOW), who proves far more intelligent and wilier than the neoliberals bargained for.

The Hunt is best when it sticks to the action and abundant violence. Like the best slasher films, it doesn’t disappoint with its kill count. While most of the kills come at gunpoint, the uniqueness of the kills doesn’t seem to wane, whether it’s someone’s head being unexpectedly blown off or a shootout in tight quarters. And Betty Gilpin is the powerhouse here, the quintessential ‘final girl’ and action hero wrapped up into one.

Where the film fails miserably is its subversion. While it definitely flips the script on the usual narrative out of so-called ‘Liberal’ Hollywood by turning the Neoliberal characters into the idiotic, boorish villains and the working-class Conservatives into the heroes, it’s so ham-handed a free from subtlety or even genuine humor, that it’s just cringe-worthy more so than it is an honest socio-political commentary. This is no George Romero, this is just a bludgeon to the head and more virtue signaling from the very same Hollywood elites who by their very act of writing this clumsy script prove not only can’t they honestly make fun of themselves but that have no clue about the issues related to class in our society. 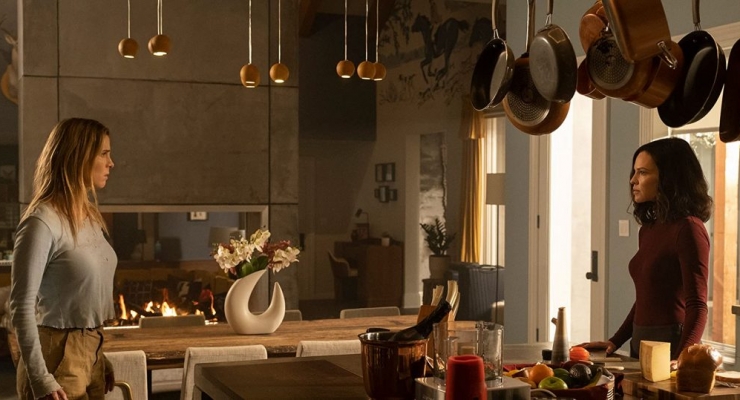 Betty Gilpin and Hilary Swank in The Hunt (2020)
7 Photos

The Hunt was shot digitally on the Sony CineAlta Venice, which is a 6K capable camera, but whether the film was shot in 6K or 4K I couldn’t find information on that. It certainly looks like it could have been a 6K production, because the AVC 1080p encoded Blu-ray is pristine, with crisp details and no evidence of noise, compression artifacts, or in-camera digital artifacts. The colors look natural and shadows are nuanced. There is a 4K with HDR version of the film available digitally where the color palette is a bit more vibrant and the highlights definitely ‘pop’ more, right from the beginning with the scroll through the text messages, where here the white background looks dimmer and eggshell-colored, and in the HDR version it looks pops like a real cellphone. Still, this BD doesn’t look like it loses any detail and may look better than the 4K stream.

The Hunt is provided with a lossless English DTS-HD Master Audio 7.1 mix. Since my sound system is setup for 5.2.4 Atmos/DTS:X, it plays back only in 5.1 on my gear. That said, the mix and mastering is superb. It is fantastically balanced with excellent atmospherics, the score evenly spread across the channels, and solid effects such as gunshots in the surround channels. Low end is beefy without being overpowering and the high-end never gets fatiguing.

The bonus features are few and rather self-explanatory.

Were this film divorced from the clumsy politics that is hilariously labeled as ‘subversive’ – about the only thing hilarious about this film – it would be a strong horror/thriller with a powerhouse lead from Betty Gilpin. The Blu-ray is an awesome reference quality release if you want to check it out.

The Hunt is out on Blu-ray Combo Pack June 9, 2020 from Universal Pictures Home Entertainment