Did we really need a story about the Huntsman that didn’t involve Snow White? After seeing first time feature film director Cedric Nicolas-Troyan’s The Huntsman: Winter’s War, the answer has to be a resounding, no!

Nicolas-Troyan (who was visual effects supervisor on Snow White and the Huntsman) offers up a convoluted prequel/sequel to the previous reimagining of the classic fairy tale wherein the huntsman Eric (Chris Hemsworth) gets caught up in a rivalry between evil queen Ravenna (Charlize Theron) and her younger sister, the ice queen Freya (Emily Blunt). Years after Ravenna has been run out of her kingdom by Snow White (who doesn’t really appear in this film aside from a brief glimpse of her in a flashback of sorts), Eric is also in trouble with his queen, Freya, because of his love for fellow hunter Sara (Jessica Chastain), and Freya has decreed that love is forever banned in her kingdom, and especially amongst her “children” the hunters. Now living in exile from Freya, Sara suddenly returns to Eric’s life after years of believing her to be dead and the two are sent on a mission by one of Snow White’s men to recover Ravenna’s enchanted mirror, which has been stolen by ogres and is releasing its evil. They must steal it back so it can be sealed away before Freya can capture it and use it to amplify her powers to cover the entire world in an icy frost.

To call Winter’s War is a confused mess would be an understatement. Even putting aside the chaotic feeling of trying to tell the story of what happened before Snow White, then switching for the next two acts of the film into what happens after Snow White and the Huntsman, the film has no character we really care much about, because, the Huntsman is not a compelling hero.

The rivalry between the sisters Ravenna and Freya verges on campiness when it reaches its climax and, without giving the ending away, Freya’s sudden self-awareness is a real hoot. What were the screenwriters Evan Spiliotopoulos and Craig Mazin really trying to do? Or perhaps this was the handiwork of poor linear handling by Nicolas-Troyan who just got in over his head? The growth of the main antagonist is just poorly handled. The visual effects, however, are all fantastic, and that is where Nicolas-Troyan’s strengths obviously lie. I don’t want to put all of the blame on him, though, because The Huntsman: Winter’s War was ultimately an unnecessary prequel or sequel, or whatever you want to call it, and the creative team behind it obviously struggled to make it work. 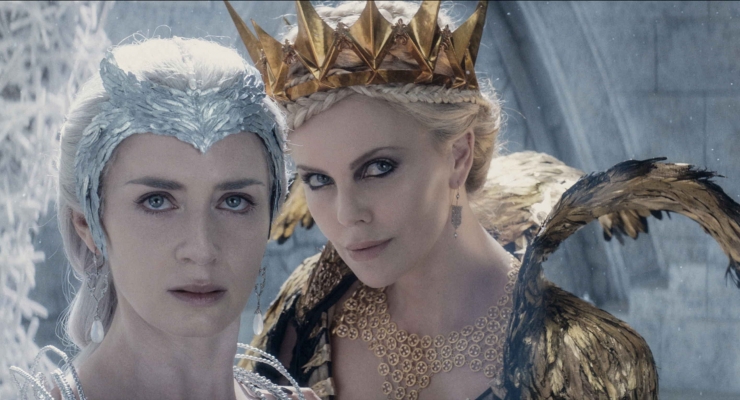 The Huntsman: Winter’s War was shot on Arri cameras at both 3.4K and 6.5K resolution, but a 2K digital intermediate was used in the processing stage, so while there is a 4K UHD release of this film, there will likely not be much benefit in additional resolution (it will simply be upscaled or rescaled, if you will), although it would still benefit from the additional bit depth of HDR, which is independent from resolution. That said, this Blu-ray release encoded in AVC 1080p from Universal looks breathtaking and one can certainly see where the image would benefit from HDR even as even here it looks nuanced, clean, and crisp. There are no issues with aliasing, posterization or noise and the visual effects present well.

The Huntsman: Winter’s War comes with a lossless, object-oriented DTS:X sound mix on Blu-ray. While the added dimensionality is definitely a benefit, this is not one of the best sounding DTS:X (or Atmos) mixes I have come across. Still, we get a nicely balanced mix that has oodles of atmospherics, excellent low-end extension and clear dialogue that stays way up over the fray of sound effects. Discrete panning through the surround and “X” channels is judicious, but it works well when done.

Universal supplies a decent slate of extras here, including an audio commentary from directory Cedric Nicolas-Troyan and deleted scenes also with director commentary. They don’t have long running time in total and the making of feels more like a feel-good promo than an in-depth analysis.

Emily Blunt and Charlize Theron try their best and the visual effects are good, but this film falters due to having a hero we don’t really care about, a poorly done screenplay, poor editing, and a confuses storyline. The extended edition doesn’t help things out much at all with its additional six minutes. The Blu-ray release from Universal, on the other hand, is pure reference home theater material.