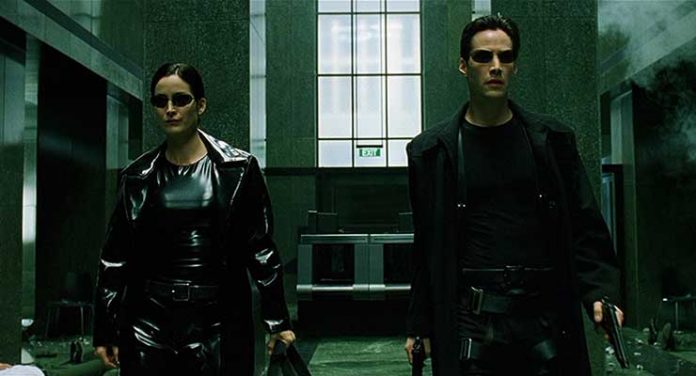 1999’s The Matrix is the second feature film from sibling filmmakers The Wachowskis who made their impressive debut with the completely different, but stylish and sexy thriller Bound.

In this sci-fi action/thriller that owes a lot of its plot and philosophical leanings to anime (1996’s Ghost in the Shell in particular) unimposing hacker Thomas “Neo” Anderson (Keanu Reeves) lives a bit of double life – workday cubicle office worker by day with a side job as a computer hacker at night. The latter is what brings him into contact with Morpheus (Laurence Fishburne) who has some mind-blowing information for Neo. Apparently, the world that neo has been living in, late 20th century America circa 1999, is just a vast AI contract created by robots that conquered humanity centuries earlier in a war between the sentient robots and humans. Now they have the humans jacked into the “the matrix” to keep them placated so their bodies can be used as batteries to be discarded when they run their course. The real world is a vast wasteland ruled by the AI and robots where the few free humans have been forced underground. Morpheus believes Neo to be “the One” who can rise up to control the Matrix and overthrow the AI, helping humanity finally defeat its mechanical overlords.

This is a sci-fi film, but it is also an action film that, in 1999 was at the forefront of visual effects that seem quaint and, frankly, overused by today’s standards thanks to the bajillion Resident Evil movies amongst others. The vaunted “bullet time” effect that was so stunning at the time may be ho-hum now, but in the context of this film it is still fantastic and holds up better than expected.

But The Matrix is more than just its visual effects. Like Ghost in the Shell, it is a philosophical exploration of reality and humanity. It is the ultimate exploration of 1990s nihilism – what is real? What is reality? Does “reality” even exist? What is the difference between truth and dream? The Blue pill or the Red pill?

Never fear, however, the Wachowskis never allow this film to get bogged down in too much exposition or pondering on the meaning of life and existence. The action is the true driver of the film at all times, from the very opening with Carrie-Anne Moss doing her famous crane pose kick in mid-air as she takes down a group of unsuspecting cops in the matrix.

They have gone back to the 35mm horizontal Kodak Vision 200T 5274, Vision 500T 5279, and Vision 800T 5289 to create this new 4K Ultra HD remaster that comes encoded in HEVC 2160p (4K) with Dolby Vision high dynamic range. There is still some green tint in the scenes that take place inside the matrix, but the Dolby Vision helps it look more nuanced and provides a wider array of colors so that everything doesn’t just look like it has been splashed with the “Green Matrix” crayon. The highlights offer tremendous ‘pop’ and shadow detail is excellent as well. We get a lot more of the finer details in this new transfer where the old Blu-ray tended to look soft with a covering of diffuse grain. Here the grain is crisp and very organic. There are still some scenes that soften a tad, but overall his is a very satisfying and amazing looking transfer.

The Matrix gets an immersive English Dolby Atmos audio mix on 4K Ultra HD Blu-ray. The previous Blu-ray release of this film had a darn good Dolby TrueHD 5.1 mix, but I always felt that the high frequencies on that release where just a bit too tweaked and could become fatiguing, especially with the constant barrage of gunfire. That has been rectified in this new mix and mastering. The high frequencies are airy, relaxed, the low end is beefy, that EDM soundtrack pulsates brilliantly, and the height channels in concert with the surround and surround back channels add a sense of real spatial relativity.

While there is an abundance of extras included with this release, these behind-the-scenes making ofs and audio commentaries have been around before on Blu-ray and DVD.

A stunning new transfer of this 1999 sci-fi classic from the Wachowskis. The Dolby Vision and Atmos add new depth and detail to the picture and sound and the film has never looked or sounded better.