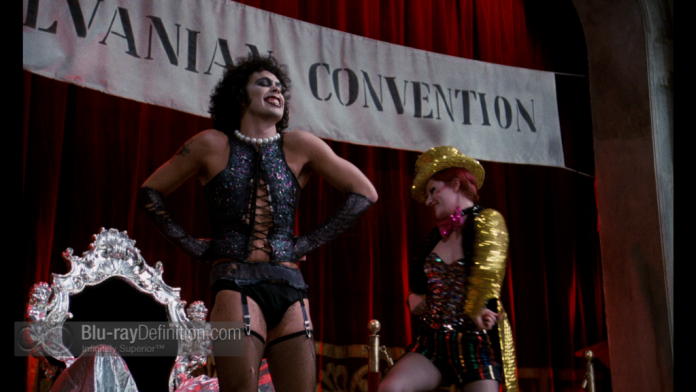 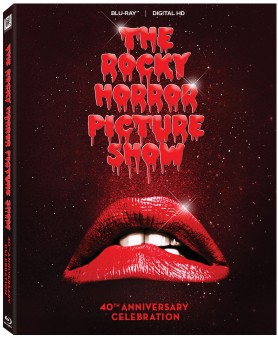 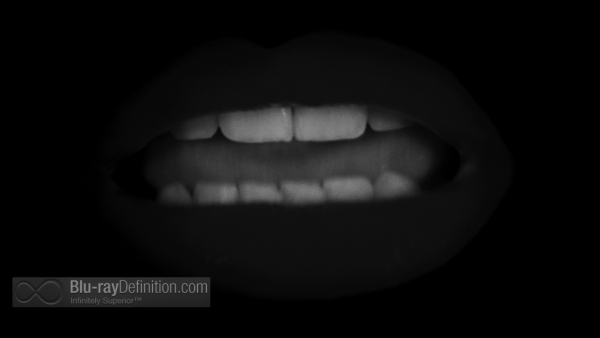 Originally released in 1975, this comedy horror rock musical was initially a flop that had to be pulled from wide release until executives at Fox decided to push the film’s “cult” status at midnight showings alongside such fare as Pink Flamingos and the 1930s PSA Reefer Madness. Starting at the Waverly Theater in New York City in 1976, The Rocky Horror Picture Show soon began to draw crowds, long lines, and turn into a long-lasting phenomenon that lasted well into even my own teen years in the 1980s. I still remember the small, independent cinema not too far from my small high school in New Rochelle, NY running midnight showings of the film right into the early ‘90s.

A rather strange and gender-bending film from the very opening credit sequence of a disembodied mouth singing, Rocky Horror follows the misadventures of the naïve, newly engaged couple Brad Majors (Barry Bostwick) and Janet Weiss (Susan Sarandon) whose car breaks down outside the creepy castle of the strange, cross-dressing Dr. Frank-N-Furter (Tim Curry), who is throwing a bizarre celebration for “Transsexual Transylvania” and the birth of his new creation, the muscular Rocky Horror (Peter Hinwood). How will Brad and Janet survive this motley gathering of oversexed strangers?

The Rocky Horror Picture Show is not exactly a model of great filmmaking; frankly, the film doesn’t make much sense if you think too much about it. But what has made this particular rock opera such a long lasting success is its undeniable kitsch, its catchy songs like the opening “Science Fiction/Double Feature”, “The Time Warp”, and Frank-N-Furter’s torch song “I’m Going Home”. The movie has also encouraged audience participation, usually frowned up in the theater, but not in the case of this midnight movie. It practically invented the interactive moviegoing experience. Shouting audience responses, throwing props, dressing up and playing along with the actors onscreen and singing along with the tunes are all part of the Rocky Horror experience. 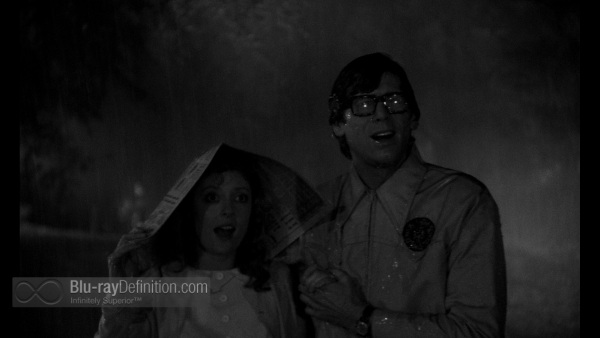 This 40th Anniversary release comes with the same 4K restoration from the original camera negative that was released for the 2010 35th Anniversary Blu-ray release. It’s a beautiful AVC 1080p transfer with vivid color and, in the case of the optional black and white opening, crisp and high contrast black and white. The film grain present is natural and not overwhelming. There aren’t any issues with dirt, scratches or any other debris. 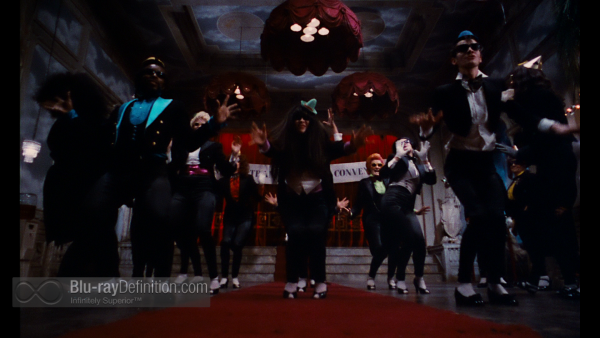 Rocky Horror comes with its original monaural soundtrack in Dolby Digital 2.0 and the English DTS-HD Master Audio 7.1 (48kHz/24-bit) mix from the 2010 35th Anniversary Blu-ray release. The 7.1 is masterful, if you are someone who enjoys music in surround. This mix really opens up the performances, placing instrumentation around. For instance, the opening “Science Fiction/Double Feature” places a saxophone in the surround right channel. At various times, background choruses may be sung in the surround channels or the surround back channels. There’s lots of ambience and atmosphere, a lot of dynamic range, stereo panning, and clear dialogue. The monaural track is by necessity very limited in scope and much more claustrophobic in comparison, but it will do the trick for those who want a more authentic experience. 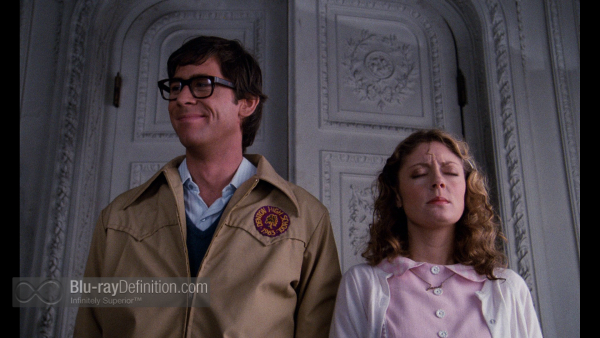 This disc is packed with extras including interactive “fan participation” features, a shadowcast, an interesting commentary, and more. 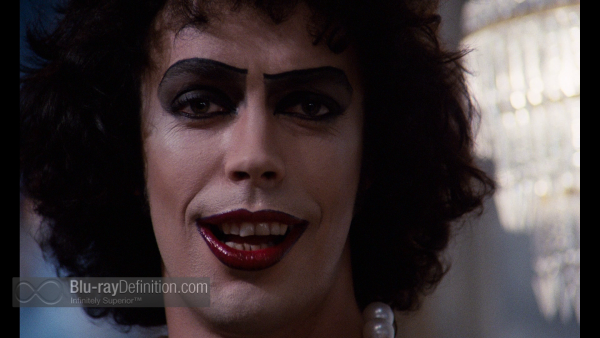 This perennial midnight movie cult favorite looks and sounds fantastic in this 40th anniversary celebration edition on Blu-ray. Longtime fans who did not pick up the 35th anniversary edition would be wise to get it this time around. 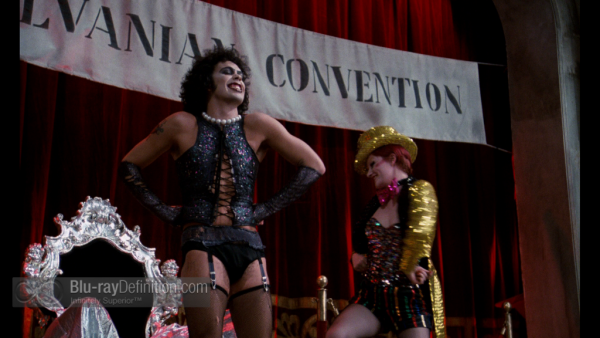 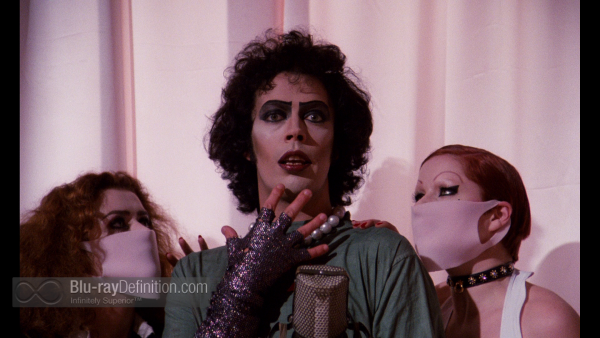 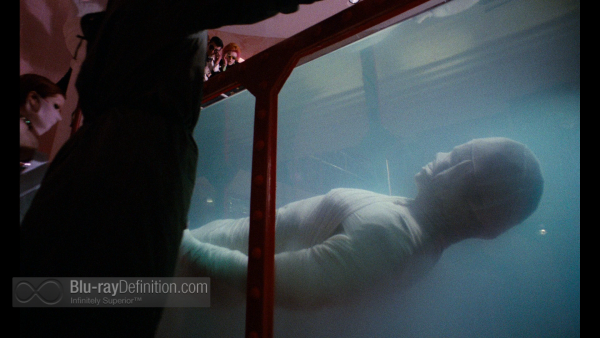 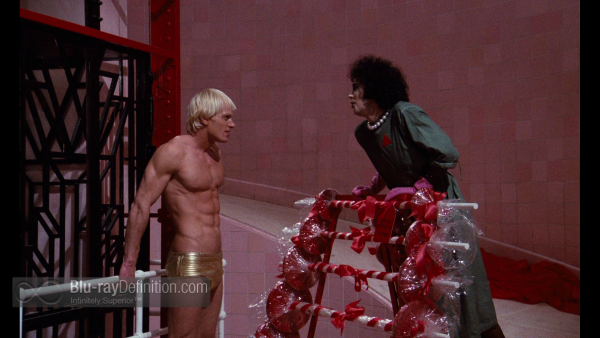 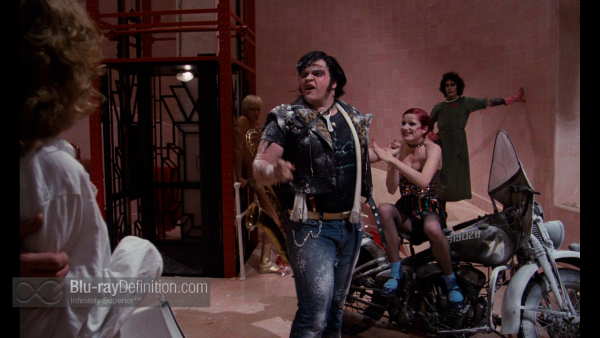 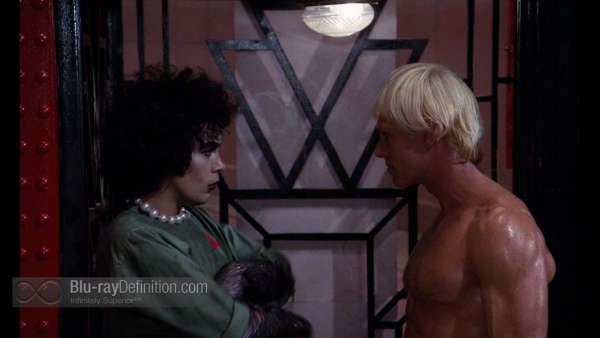 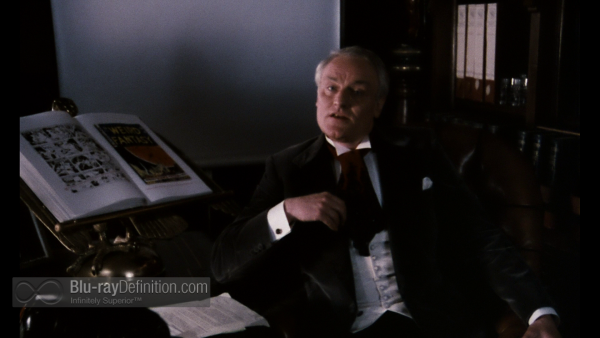 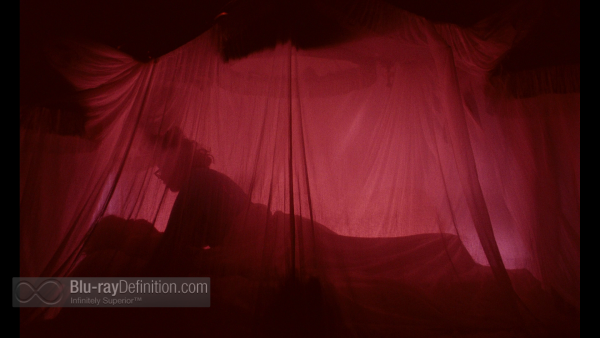 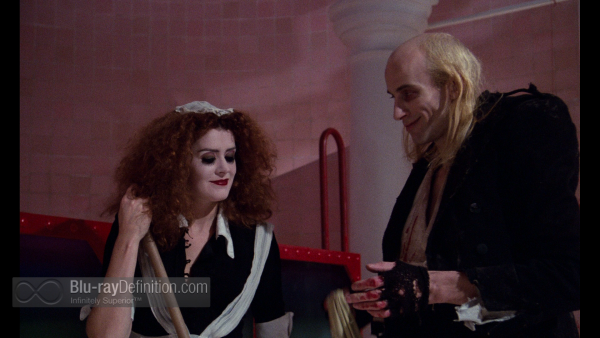 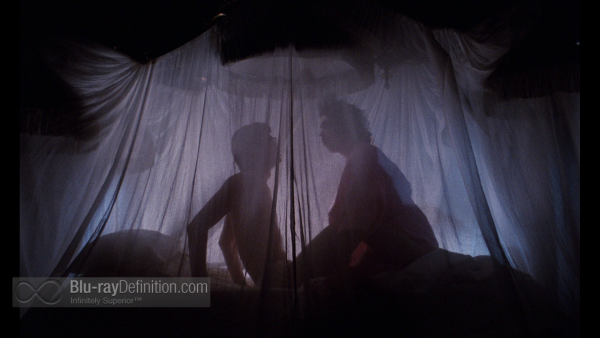 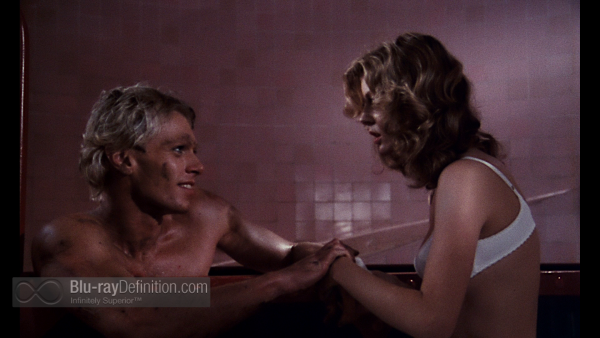 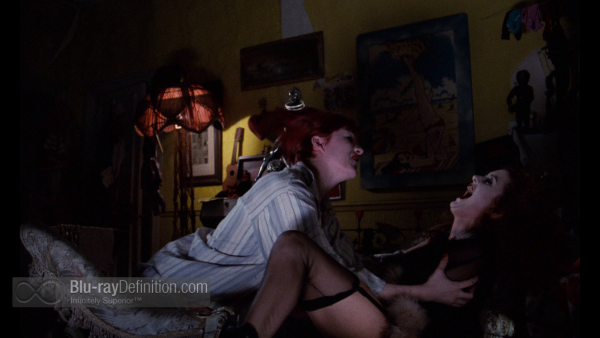 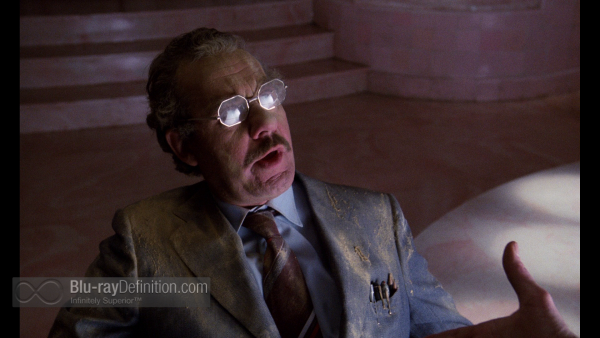 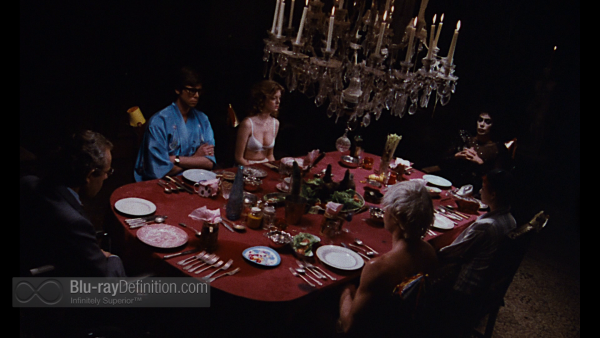 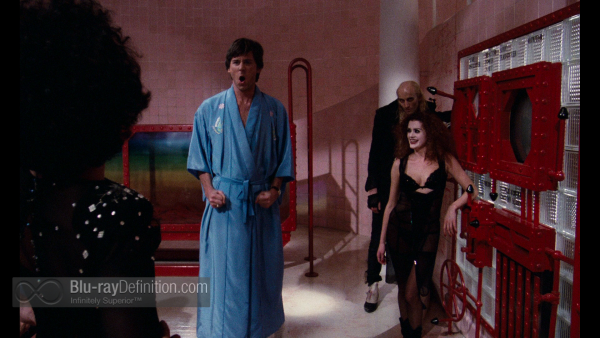 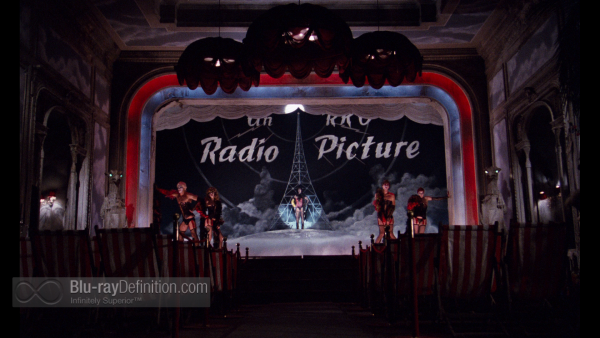 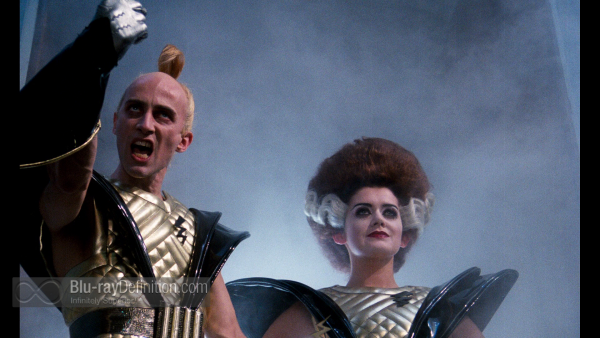 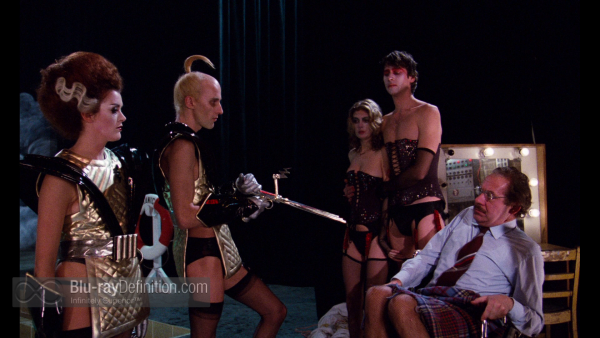