This MTV series is obviously aimed squarely at the same YA market that eats up the likes of The Hunger Games, Divergent, and the Twilight films. Based on the 26 volume Shannara series of fantasy books by Terry Brooks, The Shannara Chronicles: Season One takes its starting point specifically from Brooks’ novel The Elfstones of Shannara.

In the world of Shannara great magical creatures, Elves, Dwarves and Gnomes, once inhabited the Earth. Most used their magic for good, but some used it for evil and became demons. Eventually a great war raged between these races and they killed each other out. Then came the age of humans, an age of science, and the creatures of old faded out of memory, though they still existed. They were deemed no more than fairy tales. Eventually, by the 21st century, humans also became consumed by war and built destructive nuclear and chemical weapons that caused massive destruction.

The series is set thousands of years after this destruction and the elves, who had been hidden away keeping the demons imprisoned with a magical tree known as the Ellcrys, once again emerge to save the world from a demonic threat. One elvin girl in particular, Amberle Elessedil (Poppy Drayton), who defies centuries of tradition to become the first female elf to run the brutal ritual race called “the gauntlet” and become one of the “Chosen” — those picked to guard the Ellcrys, a sacred tree at the center of elvin society. She will also be the one to see visions of a deadly future and a destiny she must fulfill when she touches the tree during her confirmation ceremony as one of the new Chosen. Along with a half-elf named Wil Ohmsford (Austin Butler), who happens to be the last of the royal line of Shannara and one meant to wiled ancient magical stones known as the Elfstones, and a human “rover” girl Eretria (Ivana Baquero), Amberle must go on a quest to take the seed of the now dying Ellcrys to a place called the Safe Hold to keep the growing demon threat and the malevolent Dagda Mor (Jed Brophy), a an elf turned evil by dark magic who want to ruin the world, at bay.

The Shannara Chronicles, filmed in the usual fantasy location of New Zealand, was far better than I expected it to be going in and, honestly, having never read the books, I didn’t really know what to expect outside of a couple of brief encounters with the series on TV and my Roku. In fact, this series, which claims Jon Favreau as an executive producer on one episode looks stunning – exactly how you’d expect a fantasy series with the vast world that Terry Brooks has created to look. The acting is at times a little too “teen angsty”, but the young actors Poppy Drayton and Ivana Baquero are standouts and they hold their own against the veterans like John Rhys-Davies and James Remar. However, there’s a clear bias and skew towards the young in this series, and most of the veteran actors are culled in favor of the young a beautiful before too long, which is a travesty. One somewhat older actor who manages to stay alive, somewhat, is Manu Bennett (TV’s Arrow), and the Kiwi actor steals many of his scenes as Allanon the powerfully magical druid. 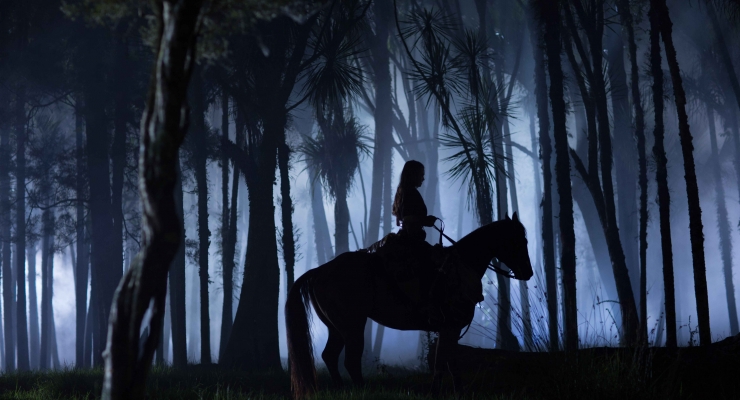 Although the 1.78:1 framed AVC 1080p encodement of The Shannara Chronicles offers a generally pleasing transfer on Blu-ray with strong detail and what is often a cinematic appearance with vivid colors yet natural flesh tones, there are some issues that I spotted. There is some mild color banding that can be spotted especially in the skies, and throughout the series there is video noise that, mostly looks fine and can almost pass for a layer of film grain, but the opening scenes of episode 5 “Reaper” are a different matter entirely. It looks like someone dropped the ball on this encoding, and it is a hot mess for the first five minutes or so full of a high level of noise, banding, and even posterization. It finally settles down and gets back to how the rest of the season looks, but with the other, albeit minor, anomalies, it is enough to mark this down.

The main audio track is a Dolby TrueHD 5.1 mix. A lossy Dolby Digital 2.0 stereo mix is also included. The 5.1 track is atmospheric and pretty good for a television series in its placement of discrete sounds and low-end extension. There is some obvious clipping in dialogue during louder passages that requires taking a couple notches off the score.

The on disc extras all seem very upbeat and more promotional than informative, although they do provide some behind-the-scenes footage and plenty of interviews with the cast and crew, including the author Terry Brooks.

This action-filled, magical romp has a way of sucking you in to its fantastical world of strange creatures and machinations. The production values are top notch and the character development is good even if they tend to fall into the trap of pandering to younger audiences. It will be interesting to see if they can maintain the series and even improve it through another season or more.