Stanley Kubrick was an auteur who was always moving forward, trying his had at different genres, so when the popularity of horror took off in the late 1970s, he set his sights on putting his own spin on it, the result was 1980’s The Shining, an adaptation of the Stephen King novel.

Struggling writer Jack Torrance (Jack Nicholson) takes on a job as the winter caretaker for an isolated hotel, bringing his wife Wendy (Shelley Duvall) and supposedly psychic young son Danny (Danny Lloyd) with him. But this hotel has a violent past and strange supernatural forces soon begin to work their will on Jack, turning him against his family, and causing Danny to see premonitions of violence.

Superficially, Kubrick’s The Shining is one in a long line of Gothic haunted house horror films done with the layered perfection that only Kubrick could pull off, from the Steadicam takes, the Hitchcockian unbroken takes through the corridors, to the big, tall cinematography (Kubrick preferred height to width) that still managed to convey a sense of claustrophobia even as we watched so few people inside this giant hotel. Those are the obvious, yet brilliant ploys Kubrick used to hook the viewer.

Dig down deeper, and The Shining is an allegory or metaphor for an unhappy man, a man who hates his life, his wife, even his child. A look into white male violence, the horrors of domestic abuse and how men often strike out at those they feel are the reason for their own failures in life. In this case, Jack is told by Grady he had to “correct” his wife and daughter when they tried to prevent him from doing his duty, in other words, the women in his life were responsible for his failures, so he had to invoke violence to put them in line. Jack slowly starts to do the same toward his family. So, Kubrick’s horror film, despite its supernatural elements of weird twin sisters appearing out of nowhere and rivers of blood, has always been most horrifying because of its scariest elements of all, the horrors perpetrated by people. 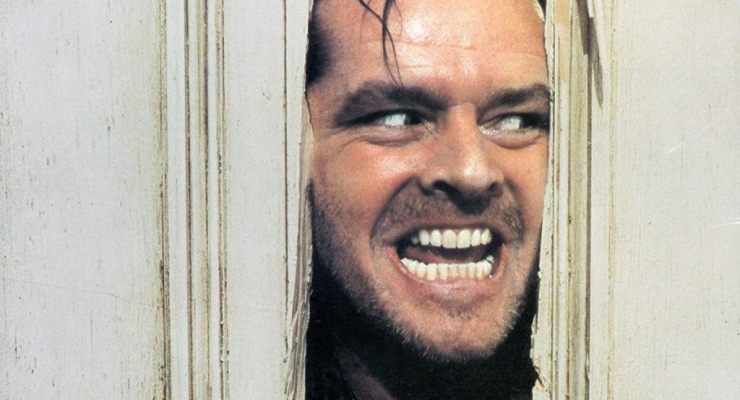 The 4K remastering for this release of The Shining was done from a new 4K scan of the original 35mm camera negative at Warner Bros. Motion Picture Imaging. Filmmaker Steven Spielberg and Stanley Kubrick’s former personal assistant Leon Vitali worked with the team at Warner Bros. to remaster the film. It is brought to 4K Ultra HD in a 1.78:1 HEVC 2160p (4K) encodement with Dolby Vision HDR that can only be described as gorgeous. While the application of Dolby Vision doesn’t quite ‘pop’ or dazzle like one might be used to from modern blockbusters, what we get here is a more natural, subtle application that extends the dynamic range, supplies a bit more nuance in colors of lights, balance in the shadows, and, in particular, stands out in places where you may not notice, such as when Jack speaks with Grady in the restroom – the reds there are really, candy red as opposed to on Blu-ray where they are still very red, but less striking. The overall detail is also excellent, and we get a fine, textured, filmic layer of grain that is rather consistent throughout even as the image remains clean with no signs of heavy-handed DNR.

The Shining was originally mixed in mono, but this release comes with a beautiful DTS-HD Master Audio 5.1 remix that is natural, dynamic, and lush with atmospherics. It offers up clear and full dialogue and is wonderfully effective at conveying the gloomy score by Wendy Carlos.

The supplements are solid, but they are all ported over, previously released bonus materials, so if you have owned The Shining on Blu-ray then you won’t be getting anything new here.

A brilliant film that reveals more of itself after every viewing even decades after its release, this 4K Ultra HD release with a brand-new restoration by Warner Bros. aided by Steven Spielberg and Leon Vitali is pure reference and a must-own for Kubrick fans and cinephiles.