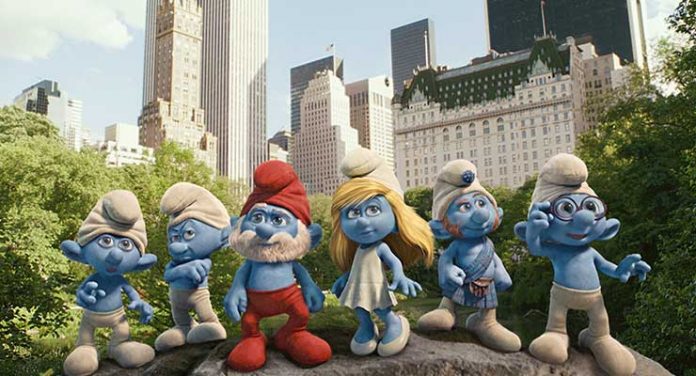 When I was a kid I was a big Smurfs fan, so much so that I had a collection of almost every Smurfs collectible figurine that was released, a stuffed clumsy Smurf, and had to watch the Smurfs cartoon every Saturday morning. Decades later when that brief Smurfs obsession had been long forgotten, Sony resurrected the Belgian comic artist Peyo’s characters for a big screen adaptation, as Hollywood is wont to do.

This 2011 film directed by Raja Gosnell (Beverly Hills Chihuahua, Scooby Doo) takes the little blue gnomes from the 2D comic strips into the 3DCG world and into the world of humans. The journey isn’t completely successful. The story follows the most popular Smurfs — Papa (Jonathan Winters), Smurfette (Katy Perry), Brainy (Fred Armisen) and Grouchy (George Lopez) – who flee through a portal in an effort to escape the clutches of the nefarious wizard Gargamel (Hank Azaria in a fittingly over-the-top portrayal). The portal leads the little creatures from their hidden magical forests into the unfamiliar territory of Manhattan where they are now surrounded by towering skyscrapers, yellow cabs, and giant people. When Clumsy ends up trapped in a boxful of work papers for stressed out ad executive Patrick Winslow (Neil Patrick Harris), the Smurfs follow Clumsy and Winslow back to Winslow’s apartment where they invade Winslow’s life with his expectant wife Grace (Jayma Mays). The Winslow apartment becomes home base for the Smurfs to hideout from Gargamel as they plan on how to get back to the beloved forest they love so much.

Just as Gosnell did with his Scooby Doo film, he brought a disappointing rendition of this beloved Saturday morning cartoon to the screen. It neither captures the mood of those cartoons nor of the original comic strips from Peyo. That said, if one takes it on its own, it is a lighthearted adventure that puts the Smurfs in new circumstances that perhaps modern youngsters would be able to relate to. It is admittedly rather funny to see the juxtaposition of the Smurfs (and Gargamel) who seem stuck in a time warp trying to interact with modern technology. At one point Smurfette is absolutely astonished that Grace can actually change into a completely different outfit.

Still, The Smurfs is just not a good movie. There’s no character development or honest sense of peril. We always know truly that the Smurfs will survive, we know Gargamel is a buffoon, not a genius wizard, and the fish out of water shtick with the Smurfs in the human world wears thin pretty quickly. However, if you let go of all of those things and just take it on its own without any contemporary cynicism, The Smurfs is fine and watchable at least one time through. It just doesn’t have much replay value. 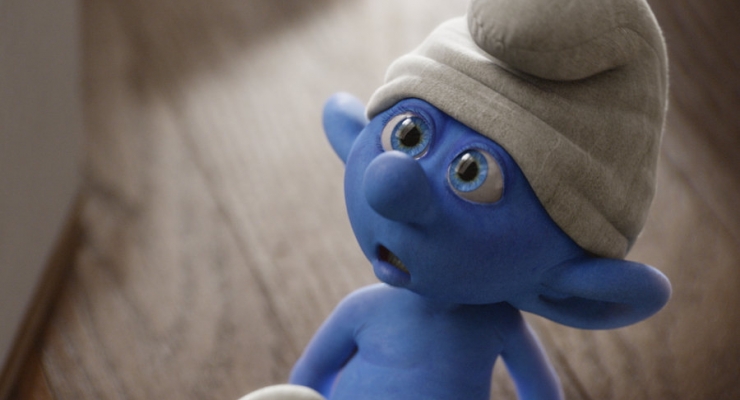 The Smurfs live-action elements were shot on the Panasonic Genesis HD camera and the animation is all 3DCG. A 2K DI (Digital Intermediate) used for post-processing, meaning this entire film is upscaled to 4K for this Ultra HD release, so it is the HDR (High Dynamic Range) that makes it stand out. The HDR is HDR10 and it is applied well, although the overall color reproduction is really no more brilliant or vibrant than this sort of animated production normally looks on a standard Blu-ray. It is the visual effects such as the blue moon spell and Gargamel’s wizardry that really pop or the shots of the Manhattan skyline at night that sparkles dazzlingly. The film comes in a 2160p HEVC encodement framed at 1.78:1.

The Smurfs gets a Dolby Atmos soundtrack that is very encompassing with lots of overhead sound effects, atmospherics, and solid effects throughout the soundstage. The low-end is nicely extended and, while there were a couple of moments where dialogue dipped just a little too low, for the most part dialogue was full and clear.

The Smurfs is packed with extras all on the standard Blu-ray Disc. They include a Smurfs game for the kids. Two commentaries, and a second screen feature (free app download required). While the disc also purports to have BD-Live features and my player (Oppo UDP-203) is connected to the internet, it kept telling me my player was not connected and would not grant me access to these BD-Live features. Since the Blu-ray is from 2011, either this is a bug in the player or the BD-Live link for the disc is no longer live.

There’s a lot of action, the animation is incredible, the Smurfs are brought into the 3D world believably, but the feel of the original Smurfs is missing and as a film, The Smurfs is just not really very good. That said it will provide at least some wholesome family entertainment and certainly some strong reference material for the home theater.