Set in late 19th century rural Vietnam, 14-year-old May (Nguyen Phuong Tra My) is given away in an arranged marriage to a rich, older landowner and she becomes his third and youngest wife. She soon learns that she can rise in status in the household if she gives birth to a son and the possibility comes quickly when she becomes pregnant. But as May becomes settled into her surroundings, she also becomes fascinated with her fellow wife Xuan (Mai Thu Huong Maya), becoming friendly with her, confiding in her, and eventually falling in love with her. This is a time when this love could put both women in danger, and May is faced with the harrowing choice of suppressing her true feelings and carrying on in silence under the oppressive male rule of the era and the household or somehow finding a path to personal freedom.

Mayfair’s film is one of great subtlety and symbolism. Rather than directly challenging viewers with the complex topics the film contains, she lets the events speak for themselves. If there is a weakness to her approach, it is that she doesn’t paint the male characters very vividly, although we very quickly understand the sort of male dominance and misogynist oppression the women are living under. There’s a particularly uncomfortable sexual scene where May’s husband makes her crawl to him on her hands and knees, and we understand thanks to Mayfair’s delicate, thoughtful direction, it’s because he knows he has all the power. There’s another scene where another young girl, having just been rejected by her husband and having her father refuse to take her back home, hangs herself. Mayfair doesn’t offer explanations through any dialogue, the moments are left to linger, just as she uses juxtapositions of nature, such as caterpillars in cocoons with pregnancy to show inextricable link between humanity and nature.

The Third Wife is visually and aurally spellbinding. The latter is unsurprising given Mayfair’s work in so many short films in the sound department as a sound recordist, sound mixer, even boom operator. The cinematography may be the biggest surprise, however. Director of photography Chananun Chotrungroj, under Mayfair’s direction, creates a beautiful pallet that at times looks like moving watercolors, while Mayfair’s framing is full of detail. The surroundings certainly aren’t deleterious to the visuals either. The soundscape is quiet, atmospheric, almost seductively meditative. 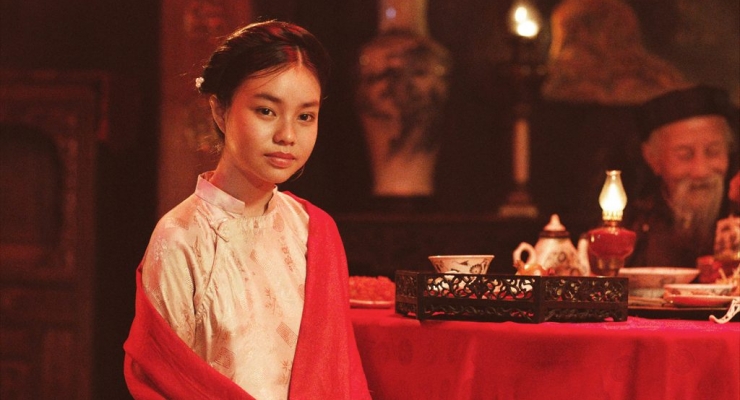 The Third Wife is brought to Blu-ray in a 1.66:1 AVC 1080p encodement. The colors are very vibrant, but more subtle to the eye, yet very pleasing. There’s a lot of detail and good black levels, though nothing very inky, but this does provide some nice details in darker scenes.

The original Vietnamese audio is included in DTS-HD Master Audio 5.1. It’s a delicate mix that is front-heavy, but beautifully done in that it focuses on quiet, atmospheric sounds such as breezes, rain and trickling water. It’s a sensual sounding mix, but one that really needs to be turned up a little to be appreciated.

Only the trailer is provided on disc and a DVD with the feature is also included. Theirs is also a booklet with  an interview of Ash Mayfair by David West, production stills, and credits.

This is a beautiful, poignant feature film debut set in late 19th century Vietnam that tackles powerful issues such as arranged marriages, child brides, oppression of the LGBTQ and misogyny in a subtle way. The Blu-ray and DVD from Eureka is a satisfying presentation although it lacks any substantial on-disc bonus content.

3.3 / 5 TheaterByte Rating
{{ reviewsOverall }} / 5 User Rating (0 votes)
UK:15Rating Certificate
An Nam Productions | Mayfair Pictures | Three Colors Productions | Eureka EntertainmentStudios & Distributors
Ash MayfairDirector
Ash MayfairWriter
93 Mins.Run Time
£12.99MSRP
19 August 2019Release Date
1.66:1Aspect Ratio
AVC 1080pVideo
Vietnamese DTS-HD MA 5.1Audio
EnglishSubtitles
Vietnamese LPCM 2.0 StereoSecondary Audio
The Creative Content
The Video
The Audio
The Supplements
Summary
In late 19th century Vietnam, 14-year-old May (Nguyen Phuong Tra My) is given to an older, wealthy landowner to become his third wife and in his household, under the strict rule of men, she learns she can improve her status by giving birth to a male child, while also dangerously falling in love with one of her fellow wives in this beautiful, poignant, coming of age story that relies more on sights, sounds, and the symbolism of nature to tell its story than it does on direct dialogue. First-time feature filmmaker, the Vietnamese-born Ash Mayfair, shows a delicate touch and great command as a director.
What people say... Login to rate
Order by: