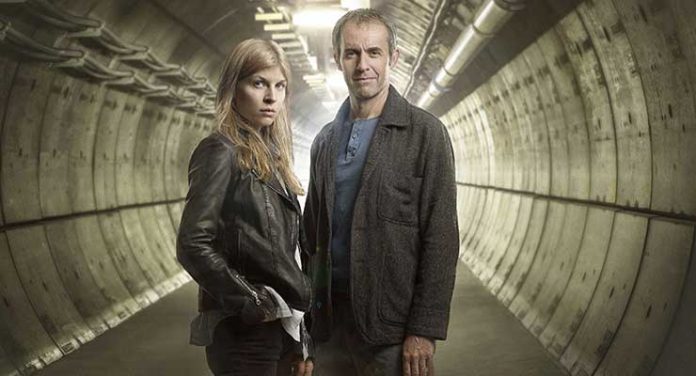 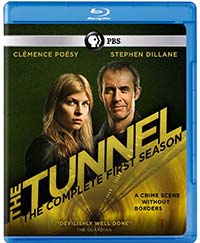 The Tunnel is the 2013 remake of 2011 Danish/Swedish crime series The Bridge (Broen/Bron). The English/French collaboration between Sky Atlantic and Canal+ takes the opportunity to move the story of the difference between Denmark and Sweden to the longstanding historical differences between England and France, and even England and the rest of continental Europe, as has been more recently highlighted by the Brexit vote.

An eerie bit of Euro Noir, the story lifts off as a dead body is found stretched across the border between England and France inside the Channel Tunnel. British and French police detectives Karl Roebuck (Stephen Dillane) and Elise Wassermann (Clémence Poésy) are called in to investigate from their respective nations and they find that, the body is actually of two different women, the upper-half body of a French politician and the lower-half of a British prostitute. The two are thus obliged to work together to find the killer. Their search leads them to a serial killer calling himself the “Truth Terrorist” who is targeting prominent members of society and exposing what he sees as their wrongdoings.

Having never seen the original series, I cannot comment on how successful this remake is in capturing the essence of that Scandinavian original, however, this is a series that is haunting and dark. There are basics in the crime procedural genre that show follows almost to the letter, such as Stephen Dillane’s Karl Roebuck as the aging detective with the dysfunctional family life who is eager to solve this case by breaking some of the rules. This archetype seems almost unavoidable in crime procedurals. Thankfully the writers give him an excellent counterpoint in the coolly removed yet still irresistibly sexy Clémence Poésy whose Elise Wassermann, it is implied, suffers from a form of autism. Even without the cliché romantic interest between the two leads that the creators of the series thankfully avoid, the interplay between Poésy and Dillane is what really helps to kick this series into overdrive.

Although it is only 1080i, the AVC encodement of the original HD production for The Tunnel looks really good in this Blu-ray release from PBS. There is a definite filmic quality with good nuance in the shadows and an organic appearance to the finely textured “noise” that layers the image. Detail is crisp and the midtones are rich enough even as the color palette is generally desaturated.

This bilingual English and French DTS-HD Master Audio 5.1 soundtrack is bulky more than it is balanced. There is hefty low-end and lots of atmospherics, but there isn’t a lot of distinct separation of sounds. Dialogue is clean and intelligible, which is the most important factor in this sort of crime procedural.

There are only brief interviews with cast and crew, as well as a behind the scenes featurette that still offer some interesting insight, but there could have been a deeper exploration of the adaptation provided.

While The Tunnel is a little slow, particular at first, the movement towards the end and the powerful performance and the moody production make it a really satisfying piece of Euro Noir. The PBS release of the original UK edition (read: unedited episodes and all the original language intact) is excellent.