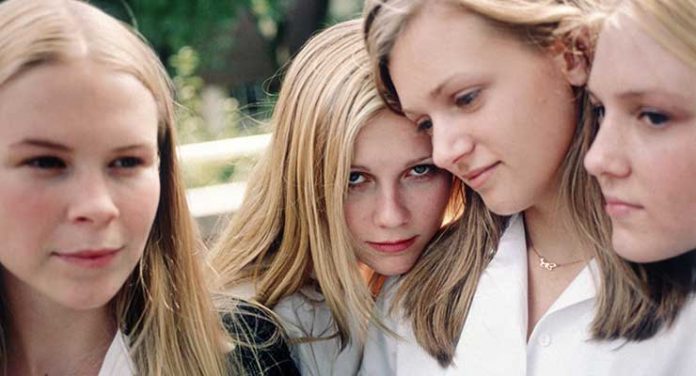 In 1999 Sofia Coppola, daughter to filmmaking legend Francis Ford Coppola, directed her first feature film, The Virgin Suicides, and made the world take notice. Based on the best-selling first novel by writer Jeffrey Eugenides, the Coppola’s film is a poignant look at the challenges facing young women.

The Lisbon sisters live a sheltered life in suburban Michigan under the oppressive watch of their devout Catholic parents (James Woods and Kathleen Turner). When the youngest sister Cecilia (Hanna Hall) commits suicide early in the film, it begins a slow spiral of despair for the entire family. Before that, a group of the neighborhood boys, fascinated with the Lisbon sisters, besotted with both their beauty and the mystery behind the tragedy of the death of their sister began to admire them and study them from afar. When the sisters’ parents, whose father is the local school’s math teacher, allows them to go to a school dance on the condition that all the sisters get a date and must go together, 15-year-old Lux’s (Kirsten Dunst) wild, curfew-breaking night out with the school’s popular heartthrob Trip Fontaine (Josh Hartnett results in a crackdown on the Lisbon sisters.

Their parents pull them out of school, lock them in the house for weeks, and ban them from leaving. Lux is forced to burn her rock records. This leads to weeks of Lux acting out behind her parents’ back by having sex on the roof of the Lisbon house with one strange boy after the next. Meanwhile, the neighborhood boys make contact with them through one boy’s bedroom window via lamplight and Morse code. The teens start a sweet, faraway romance of playing records to each other that convey how they are feeling, until a fateful midnight rendezvous ends in the tragedy the film’s narrator tells us was coming from the beginning.

Coppola’s film is awash in 1970s nostalgia, but it never feels like kitsch – this is the real-world, angst and reveries of puberty and feminine adolescence, curious boys trying to figure them out.  The film exists almost in a reverie courtesy of the fine cinematography of Ed Lachman and the breezy, warm sound of the musical score from the band Air. Many of the traits that take us back so easily to the late 1970s in The Virgin Suicides would be reused to even greater effect in the star-crossed love affair of Lost in Translation.

The film gets a new 4K digital transfer approved by director Sofia Coppola. The new transfer was done on a lasergraphics Director film scanner at Roundabout Entertainment in Burbank, California, from the original 35mm camera negative. Dirt, debris, scratches, splices, and warps were manually removed using MTI Film’s DRS while Digital Vision’s Phoenix was used for jitter, flicker, small dirt, grain, and noise management. The film arrives in its original 1.66:1 aspect ratio in an AVC 1080p encodement. The film has always had a soft look and it continues to look somewhat soft here, but this transfer is true to the artistic nature of the film, which sets a very 1970s look and feel. There are some moments, particularly early during the credit sequence, where there is some dirt on the lens, and that is left in place rather than messed with in a harmful way. The image looks filmic and organic with natural grain structure and good color reproduction.

The Virgin Suicides comes to Blu-ray with a DTS-HD Master Audio 5.1 soundtrack. The original 5.1 soundtrack was remastered from the 35mm Dolby SR magnetic track. Clicks, thumps, hiss, hum, and crackle were manually removed using Pro Tools HD and iZotope RX. While the mix is front-heavy with only mild ambience in the surround channels, it is a balanced mix with clear dialogue and a firm and musical mid-range that presents the 1970s music and score from band Air wonderfully.

As usual, Criterion Collection offers up a rich selection of interesting, informational new featurettes bringing cast and crew back to talk about the film, plus some archival extras and Sofia Coppola’s early short film Lick the Star.

A visually beautiful  and fascinating coming of age drama that looks at the issues facing teenage girls, this new director-approved 4K restoration of Sofia Coppola’s first film gets a gorgeous, release on Blu-ray from Criterion Collection.

The Virgin Suicides is out on Blu-ray and DVD from Criterion Collection April 24, 2018

3.9 / 5 TheaterByte Rating
{{ reviewsOverall }} / 5 User Rating (0 votes)
R (for strong thematic elements involving teens)Rating Certificate
American Zoetrope | Eternity Pictures | Muse Productions | Virgin Suicides LLC | Criterion CollectionStudios & Distributors
Sofia CoppolaDirector
Jeffrey Eugenides (novel) | Sofia CoppolaWriter
97 Mins.Run Time
$39.95MSRP
24 Apr. 2018Release Date
1.66:1Aspect Ratio
AVC 1080pVideo
English DTS-HD MA 5.1Audio
English SDHSubtitles
The Creative Content
The Video
The Audio
The Supplements
Summary
In Sofia Coppola's debut feature film from 1999 The Virgin Suicides, the filmmaker adapts the best-selling debut novel by author Jeffrey Eugenides about a group of suburban teenage boys in 1970s who become besotted with a group of pretty teenage sisters from their neighborhood who are overly sheltered by their devout Catholic parents, leading to an incomprehensible tragedy. In Coppola's hands and with the aid of gorgeous cinematography by Ed Lachman and a laid back score by Air, the film is a touching and poignant look at the issues facing young women and plays like a reverie through the '70s landscape.
What people say... Login to rate
Order by: