In writer/director Ang Lee’s 1993 film The Wedding Banquet, 1990s Manhattan finds gay Taiwanese landlord, Wai-Tung Gao (Winston Chao) who has cohabited with his lover, physical therapist Simon (Mitchell Lichtenstein) for the past five years. One of Wai’s tenants is fellow Taiwanese abstract painter Wei-Wei (May Chin) who is continually broke and in danger of losing her green card. Wai and Simon’s life is orderly and serene until Wai’s elderly parents, Mr. and Mrs. Gao (Sihung Lung and Ya-Lei Kuei) start sending their only son cassette tapes describing desirable Taiwanese women whom they would like him to marry. Their latest pick, Mao Mei Wu (Vanessa Yang) flies to New York and meets all the Gao’s prerequisites—tall, advanced degrees, and an opera singer. But Mao already has a boyfriend, so game over before it starts. Wai’s parents don’t know that their son is gay and when they decide to visit, things begin to get quite complicated.

Wai and Wei-Wei hatch a plan: they will get “married” at the Manhattan courthouse, she will get her green card and he will later return to Simon (who has been temporarily banished to a downstairs bedroom). The older Gao’s are bitterly disappointed by the no-frills civil ceremony and when the four, accompanied by the loyal Simon, go to an elegant Chinese restaurant, the maître d’ Old Chen (Tien Pien) turns out to be Mr. Gao’s old army buddy. Against the remonstrations of Wai and Wei-Wei, Chen insists on throwing them a proper wedding banquet the following day.

What started out as a very small affair quickly mushrooms into a huge event, much to the discomfiture of Wei-Wei, Wai-Tung, and Simon. Shades of La Cage Aux Folles in which a middle-aged gay man must temporarily pass himself off as “straight,” to his son’s prospective in-laws, The Wedding Banquet uses some similar plot devices to comic effects as the “newlyweds” must keep up their charade at least until Wai-Tung’s parents return home. The film’s final act turns to more serious issues like the roles of women in society, the importance of children (especially grandchildren), and the acceptance of what people cannot change about their natures. 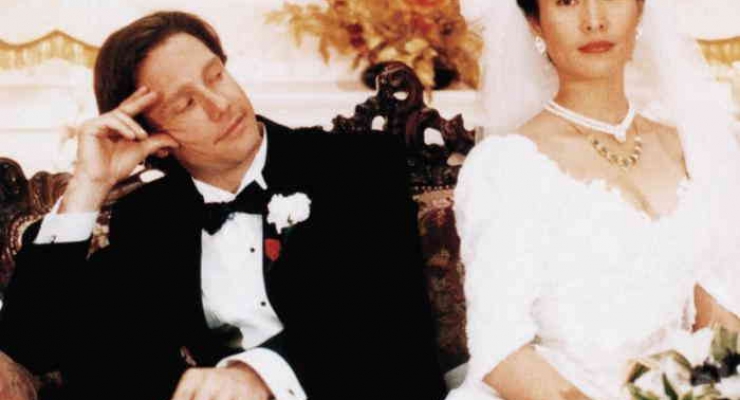 For a twenty-five year old film, shot in 35 mm, this renovated release looks mostly stunning with great colors and natural appearing details. There is little grain and blur, and just a touch of crush in the few dark scenes.

Although billed as a DTS-HD Master Audio 2.0 soundtrack, it is simply glorious mono with zero action in the extra channels. That said, the dialogue is very clear in both English and Mandarin (don’t worry, there are English subtitles)

There are the following video extras:

I have been a massive Ang Lee fan from the beginning, but inexplicably missed The Wedding Banquet during its initial release. Olive Films makes up for lost time with this splendid reissue that will delight Lee’s many fans and bring new ones into the fold. Highly recommended.

The Wedding Banquet is available on Blu-ray from Olive Films August 29, 2017.