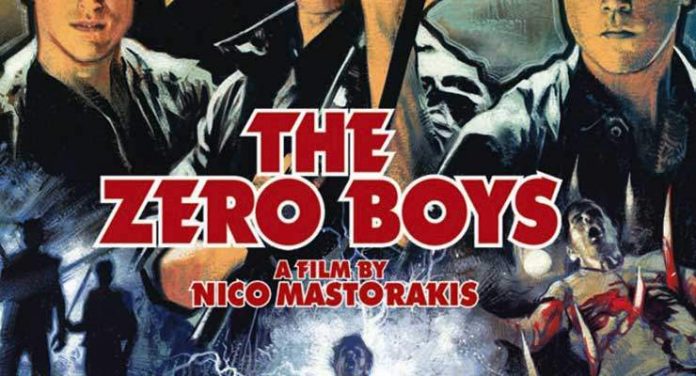 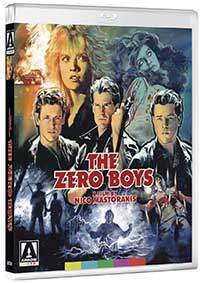 The Zero Boys is a mid 1980s film about a group of young people who have their own paintball team called “The Zero Boys.” You get the jock type, with the stoner, etc., and their girlfriends. Jaime (Kelli Maroney) is the headstrong friend who actually ends up tagging along with our group after her boyfriend “lost” her in a bet to the Boys. Yeah, the misogyny was strong in this film. Jaime isn’t your typical ditzy slasher fodder either – she’s smart, pretty, and doesn’t take crap from anyone.

Once the group packs up for a weekend in the wilderness they’ll be in for more than they bargained for. The group stumbles in on what appears to be a nice enough cabin with a note telling the guests that they should have fun until Monday. Little do they know that they are being watched and stalked by mysterious figures creeping about in the shadows of the night.

The Zero Boys plays like a typical slasher flick – you have a bunch of good-looking people being targeted one by one but what you don’t have is them getting killed off until the last part of the film. The middle part of the film plays more like a game of survival – Surviving the Game comes to mind, because our group of young people is not weak-willed. They are armed and loaded and actually know how to use automatic weapons.

It’s only until the final unveiling of the villains that we get to see an elevated body count. The film does not pretend to be anything but a simple cheesy bloodbath action-horror-fest. Therein lies the charm. It’s a horror film, with survival action overtones. A neat bit of trivia is that the sets and cabin were the ones used in Friday the 13th Part 3-D. I also chuckled lot during their journey towards the “wilderness,” because these supposed secluded woods seem to be right off of Sunset Blvd. in Hollywood – I love movie geography sometimes.

The film is also known for having several folks behind-the-scenes that went on to be superstars behind the scenes in their on right like future director Frank Darabont (Shawshank Redemption), composer Hans Zimmer (Batman v Superman), and production designer Gregory Melton (Agents of S.H.I.E.L.D.). If you can get behind some of the situations and hokey acting then The Zero Boys is harmless entertainment.

The Zero Boys is presented in 1080p, 1.78:1. The film was shot in 1986 but you would think it as shot in 2016 in 35mm. The picture has an epic grain structure. I did not notice any bits of dirt, noise, etc. Sharpness and contrast levels were spot on. Softness does creep in here and there but overall, the film does have a sharpness to it that enhances the detail levels. DNR was not detected either. They seriously went all out on this 2K restoration.

The Zero Boys is presented in LPCM 2.0 Stereo — the film plays well in 2.0 and the early music score by Hans Zimmer was made for Blu-ray. It goes back and forth between typical ’80s synth to typical slasher orchestration. Dialogue levels are stable, as are effects and what not. I did notice a few instances where typical canned special effects audio cues were used and those scenes did stick out — certain scenes involving gunfire and a few others. The 2.0 soundtrack did its best to handle those sorts of inconsistencies. It’s still a terrific audio track, though.

The Zero Boys is loaded up with a brand new director-approved Blu-ray social edition featuring a sparkling new 2K restoration approved by director Nico Mastorakis and a plethora of special features that will titillate and entertain. There’s an amusing interview with director Nico Mastorakis interviewing himself for almost 30 minutes. The rest are brand new interviews with Kelli Maroney and Nicole Rio. There is also an entertaining audio commentary featuring Kelli Maroney.

The Zero Boys was another slasher film to crop into the genre, with the added bonus that not all the victims would be helpless. Arrow Video has resurrected the film and gives us the best version of the film available to date. The Zero Boys has great technical specifications and terrific special features. The film wasn’t my cup of tea but the Blu-ray is impressive.

The Zero Boys (TheaterByte Blu-ray Review)
3.4 / 5 TheaterByte Rating
{{ reviewsOverall }} / 5 User Rating (0 votes)
R (for sex/nudity, violence, and alcohol abuse)Rating Certificate
Arrow VideoStudios & Distributors
Robert Gilliam, Nico Mastorakis, Fred PerryDirector
Nico MastorakisWriter
89 Mins.Run Time
$39.95MSRP
26 April 2016Release Date
1.78:1Aspect Ratio
AVC 1080pVideo
English LPCM 2.0Audio
The Creative Content
The Video
The Audio
The Supplements
Summary
The Zero Boys is a completely forgettable film but it does have a few good scenes and features some familiar actors from the 1980's. The film may not have been great but the Blu-ray has some great video, audio, and special features. For fans of the genre only.
What people say... Login to rate
Order by: